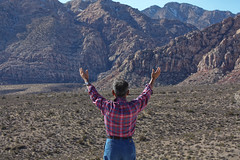 It’s such a lame excuse to say I’m tired
Everyone is tired, more or less
— Stephen Kellogg

This quote got me thinking about another quote recently, though I have no idea who originally said it to, um, quote it.

It was maybe 6 or 7 years ago and my memory says I heard it on a weekday morning show. It went something like this; If you are given the option of either staying in or going out, you will most likely never regret choosing the option to go out. This is obviously geared towards a certain crowd; 20-something, no kids and at least some disposable income. It’s also very circumstantial as there are obvious cases where staying in is a better option (hey, let’s run naked through Chuck e Cheese).

I wish I had taken this advice 15 years ago. It’s easier to tell your friends you’re tired on a Thursday night after working all day. But guess what, everyone works almost every day and being tired is no longer an excuse in my book.

It also got me thinking about how it can be useful in all aspects of life. Should I finishing writing that song? Should I wash the car? Should I go to the gym? Should I try yet another application of tater tots? Should I sit around and watch TV until I fall asleep? In most cases the only option that you’ll regret later is the latter.

It’s easier said than done, but whenever I chose the latter I later regret it. It’s time for me to create my own Red Rock Canyon.