Jethro Tull represented the first in a series of 3 concerts kicking off “Corporate Concert Week” which also included James Taylor & Carole King and Foreigner, Styx & Kansas. Out of the week’s events, Jethro Tull was my least favorite. 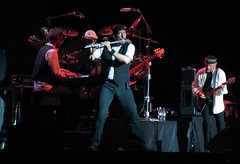 I’ve always thought Jethro Tull was special.  I remember first realizing how great Aqualung was when I heard it on the school bus around 7th grade.  With the creepy lyric of “…eyeing little girls with bad intent” it wasn’t the most appropriate song for an adult to play for 12 year olds, but it was the early 90s. A more innocent time.

I think the downside to any Jethro Tull concert today is that they never really broke up for a long period of time.  So many bands that were popular in the 60s and 70s tour today having only released a few (or zero) new albums since their prime.  These bands broke up to do Coke in the 80s and got back together in the past 15 years to play the classic rock circuit to their old fans who have far more disposable income then they had in their day.

Jethro Tull, on the other hand, have released 10 new studio albums since what in my opinion was their last great album; Heavy Horses.   Too many of their songs were from this period and to me just sound like generic rock songs with some flute, but without the whimsical folk-prog sound that I love.   I’m never a fan of a greatist hits concert from a band I love.   I always want to hear some deep cuts, but not from crappy albums.

The highlights for me were the songs with a proggy feel to them including Songs from the Woods, My God and Jack-in-the-Green. The energy in the instrumentals from these songs made way for some signature leg kicks as he rocked out on his flute.

Ian Anderson can’t sing the high notes like he used to but it’s impressively close. Some melodies were changed to accomodate his aging range, but it’s also possible he just likes to change things up since he’s been playing these songs for over 30 years. I don’t really fault him for either reason.

Overall I’m glad I got a chance to finally see Jethro Tull. My expectations were somewhat low going into it knowing a typical setlist from this tour and they probably exceeded those (lowered) expectations.