Italy is trendy, no doubt.  Regardless of its authenticity everyone loves Italian food, culture and music. You’re likely to see an “imported from Italy” note describing the cheese in the Chicken Parm on the Olive Garden menu outside of Boston as cows graze less than a mile away.  The idea that it’s imported from this magical land makes it appealing, even though it’s only as fresh as a 2,000 mile plane ride and error-prone baggage handling.  Italian cows aren’t better; Italian chefs aren’t better. “Italy” and “Italian” have become buzz words used to sell food and a lifestyle, but that’s not my Italia. 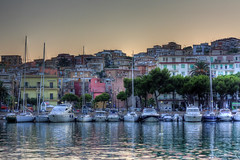 My Italia involves waking up at 9AM and taking a bus to the beach with old ladies in outfits that are best described as moo-moos.   We’ll walk around the beach, play with Super Santos, people watch and take a swim.  Lunch is at noon with some boxed wine before a nap that lasts 3 hours.  After a shower it’s time to walk into town for some pizza, gelato and shopping and before you know it it’s time for dinner at 9, then bed.  It doesn’t sound too exciting, I realize that, but Gaeta is great the way she is.

My relationship with Italia is second-hand. My wife’s parents were born there and some family including grandparents, uncles and cousins remain. She’s not as Italian as, well, someone who actually lives there, but to me it’s certainly Italian enough to show Italian pride without pretention.  It also allows us to stay with her Nonna and become immersed in their lifestyle for a few weeks every other year in Gaeta; a beach town 2 hours (by Fiat) southeast of Rome.

I’ve done the touristy thing in Italy as well, I’m certainly not above that.  We’ve done Rome, Venice, Pompei etc, etc, but that’s not my Italia.  As I sit in a restaurant in Rome, eating an antipasto sampler then appropriately some pasta while listening to Sinatra and Dean Martin I can’t help but think “wow, they’ve done a great job re-creating the American idea of Italy… in Italy”.  That’s a bit harsh, and extreme, and there’s certainly nothing wrong with that.

Nonna’s food is on a shoestring of a budget, but I’d chose it over most restaurants and not just because it’s free.  It starts with a pasta course of course, maybe some fresh mozzarella or figs or olives she bought from her friends on her morning walks.  The sauce simmers all day from the tomatoes in her tiny porch of a backyard and the firmness of the pasta depends on how loudly people complain about their hunger.  Next comes a meat course, most likely some paper thin chicken or beef cutlets, fried and battered and some salad on the side.   Finally some fruit for dessert to wash your teeth.  If you’re a guest in some one’s house it’s difficult to communicate without a common language.  Fortunately for me eating is a language in itself in my Italia and I’m more fluent than most.

It’s relatively hard for me to unwind and detach from the working world and Gaeta is one of the only places that can successfully take me away, even if there’s a blackberry waiting for me next to a picture of a saint on a doily in my bedroom.  I think it’s largely a product of my surroundings.  The Gaeta lifestyle is relaxed,  especially in August.  Nothing is urgent and the concept of working seems to be an optional activity.  While I’m sure it’s not the only place like this, it’s our Gaeta in my Italia.