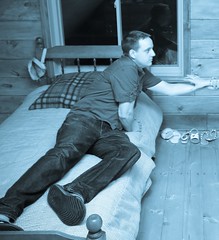 I begin in a room with about 10 beds arranged infirmary style.  There’s a baby in the corner and a young mother begins spraying an aerosol can around the baby.  It was obvious at the time that the intent was to set the baby on fire.

I get up from the bed and proceed to the door where my maternal grandparents enter the scene laying in separate beds close to the infirmary door. My gramma is also preparing to set the room on fire as I begin my exit.  I don’t make it past the door before the reality of the situation hits me and I approach my gramma to innocently ask “are you also planning to take grandpa with you?”.  She doesn’t have a verbal response but somehow gestures “yes”.  I understand that she now intends to take her life and everyone with her.

The scene changes to where people are walking around a room more casually, but the situation hasn’t changed.  I approach grandpa and insist that he follows me without asking questions. He agrees.  I also now realize that I need to take the dog which hasn’t yet entered the dream. I find the leash by the door, jiggle it to make some noise and the small, white dog makes his presence known under a folding table and is easily leashed. 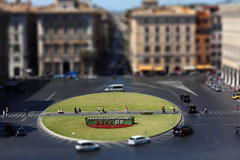 The scene again changes to what’s best described as “the getaway” through a non-specific European city as I try to reach my car. My grandpa is walking a direct route along the city streets, but the dog and I follow a more scenic route through museums and stairways. It was a route that I had walked before (in the dream) but I told myself it was worth re-doing as I felt the pictures I was taking were better than my last pass through.

The final scene takes place in my childhood home as my wife and I wait for my parents to return from vacation.  I know I have to explain the situation to them but I never do, I just continue to suggest I have something important to say and the subject changes.  We’re all sitting around the dining room table, and gramma is there, but grandpa is not. The scene closes with me looking at the dog, which is now a black lab.

As is common with many of my dreams, this one lacked a lot of the transitions necessary to tell a story, but I found it interesting enough to write down.  What happened to the mother who wanted to kill her baby?  Why did it then turn much darker where my grandmother was preparing to take her own life without care for anyone else in the building?  How did I get from Europe to Massachusetts so quickly without the help of Jack Bauer?  The white dog was my teenage pet growing up and the black dog was most likely the lab seen at a BBQ the previous day.  The “baby” theme was also present at the BBQ, though it only made a quick, morbid cameo in this dream.

It’s another theme for me to dream about being uncontrollably late, or being right next to my goal but failing to reach the final steps.  It’s often as realistic as missing an airplane and struggling to pack luggage on time.  It can also be as frustrating as running from a dog, being feet from the house and falling constantly but never reaching the house.  This theme raised its frustrating head as I was attempting to detail the situation to my parents but never being able to complete the final step.

The ultimate question I had hours after the dream was why didn’t I save my grandma or try and stop her from burning the place down.  I went through heroics to get my grandpa out, but how hard could it have been to demobilize a 91-year-old woman and save everyone?  Somehow I think the dream exposed my own selfishness. I’m a constant annoyance to my wife when taking photographs on vacation often ignoring everyone else in order to get more interesting shots.  In this extreme, and unconscious case, I let my grandpa wander free. 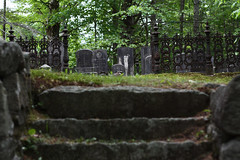 The first act played like a horror movie, or the video game Silent Hill.  Act II was far more carefree, though it shouldn’t have been, and Act III returned to normalcy.  My grandfather, no longer with us in real life, was no longer in the picture.  My gramma returned to her innocence, though her attempted arson was the elephant in the room but never actually addressed.