I made some money in my high school and college days as a baker for a local supermarket chain.  Most of the skills I learned don’t help too much in the small kitchen baking I may attempt today.  I don’t have 50 lb. bags of muffin mix at my fingertips, nor do I have industrial ovens and partially baked, preformed breads.  But one interesting item we used to make in the bakery was the hermit cookie.  It was similar to gingerbread in rectangular cookie form with raisins, but what made it special was the “extras” we added.  When cakes and pies expired they were often reincarnated as hermit ingredients and it wasn’t uncommon for me to dump whole cakes into the industrial mixer along with the hermit mix.  With a greater increase in allergy concerns today I’m not sure if this is still practiced.  However, if it is I’m sure it comes with a warning label to highlight the surprise additions; Warning: contents may contain anything in reach of an unsupervised 16 year old.

This weekend we threw a birthday party for my dad and wife and brought a rather large, full-sheet cake; whipped cream frosting, half-vanilla, half-chocolate.  It was served rather late and most people were busy dancing so the cake was only a third finished.  We took it home where it inhabited an entire shelf in the fridge.  What could I do with two-thirds of a sheet cake?  I’m not sure I had the right answer, but I had an answer nonetheless.   My goal was to create a pumpkin based casserole using the cake remains and whatever ingredients I had in stock.  Here’s what was grabbed: 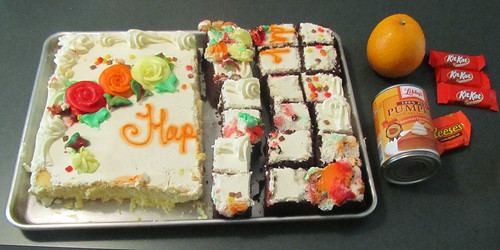 My wife didn’t agree with this experimental idea and at first gave me a very stern “no”, but that wasn’t going to stop me as the cake was destined for the trash anyways.  At the end of her disapproving lecture she let me know that this was “not how life worked”.  Did Ella Ervilla Eaton tell her husband John Harvey Kellogg that breakfast cereals weren’t how life worked when he invented Corn Flakes?   Probably, but society only advances by husbands disobeying their wives¹.  Here’s the complete ingredient list2:

Here’s what the ingredients looked like before being incorporated.  As you could guess, it took us every bit of self-control not to just eat the mixture in its current state. 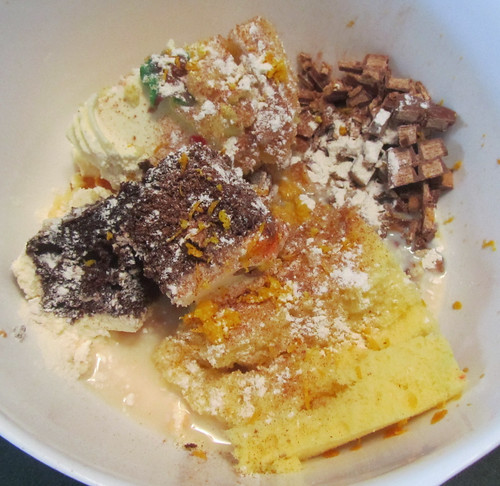 After mixing I poured the “batter” into a buttered 8×8″ pan and baked for about 20 minutes at 350.  The below photo is what it looked like before baking, but the result after baking was virtually identical. 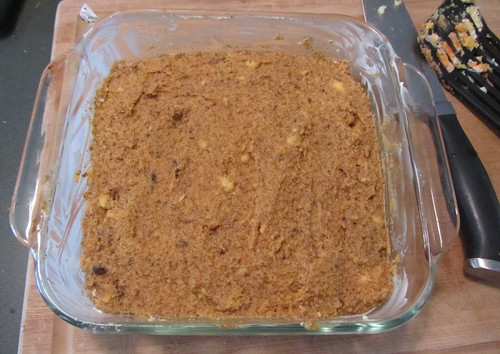 So how did it turn out?  Well it wasn’t bad, but I don’t think I’ll make the wikipedia page for famous inventors which was my original intent.  The end result reminded me of bread pudding and served with ice cream would probably have been passable at a restaurant.  Did my wife eat her words?  No.  Did she eat the Pumpkin Hermit Pudding.  Also No.

¹Citation Needed.
2For historical record-keeping only.  Do not replicate.