The end of the year produces a lot of new articles that are nothing more than rehashed lists. I had the idea to write a post about small joys in my life, past and present, that my daughter will most likely never get to experience. A week after this thought I saw the following filler article make its way across Yahoo and Google news sites: Things Babies Born in 2011 Will Never Know. The article is factual and I can’t argue with much on it, though articles that don’t teach you something new, or that are not personalized in anyway, are essentially a waste of space. Having a bullet point to illustrate the fact that people don’t wear watches as much anymore falls into neither category so I felt there was still purpose for my original article. It doesn’t speak to what I personally will miss about times long ago, mostly because it wasn’t written by me. I don’t care if my daughter never learns the joy of a fax machine, never picks up a smelly encyclopedia or never really understands why her father always uses “tape” as a verb to describe the act of recording on a DVR, or whatever futuristic recording devise we’ll have then. Here, then, is a small list of small joys that my daughter may never know.

Imagine a group of friends are hanging out at a bar.  Prior to smart phones you may hear one of these bar-goers ask the question “what was the name of the son on the show Small Wonder?”  The group would ponder, laugh, and reflect on their favorite Small Wonder memory.  “Hey, remember when Harreit re-programs Vicki to act like a spoiled brat?” “Why do you think Vicki smashed that turtle?”  Someone would eventually think of the name and everyone else would wonder why they didn’t think of it.  Today someone would pull out their iPhone, yell “Jamie” and go back to staring awkwardly between their beer and phone.   I used to think that people in large groups constantly looked at their Facebook pages via the phone, and exchanged texts, because they would rather be socializing with another group of people.  I now feel it’s a veil to protect against eye-contact; raising up a group of introverts.

Music today is a cheap commodity that can’t even be given away at times.  I remember a time when this wasn’t the case.  Yes, I remember the 1990s. In 8th grade my friends and I rode into Boston and Cambridge to visit the used CD shops in search of rare finds.  A few years later I went miles out of the way when visiting Montreal to go to a specialty progressive-rock CD store. With digital music there is no longer a concept of rare or hard-to-find music.  If an album has yet to be digitized by the time my daughter is old enough to purchase music it was probably garbage to begin with. Music itself used to be more rare.  I played Gun’s ‘N’ Roses “Use Your Illusion” hundreds of time in 1993.  I listened to it because I loved it, but I loved it in part because I had it and couldn’t easily obtain anything else.  With music so easily accessible through legal and illegal channels it has become devalued. 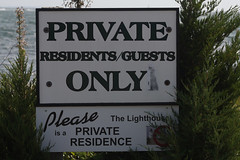 Everyone has a GPS and I can’t imagine life without it, though it was only few short years ago.  There’s no small joy in being late for a job interview or a doctor’s appointment and a GPS can greatly reduce that stress. But if conditions are right, and you’re with the right people or right frame of mind, there’s nothing more exciting than getting lost.  It’s off the expected path you learn your neighborhood, find that great coffee shop and discover that lighthouse residents don’t want you to know about. The sense of adventure cannot be staged, so if a GPS is available it will and should be used. One of my favorite ways of exploring a new city is to just pick a direction and walk all day.  Nothing planned.

I just made up this term to represent being mentally absorbed in a dark theater or stadium by the advertised and paid-for entertainment.  The only focus is the movie, musical or concert.  Digital cameras and cell phones have killed this dark focus and can instantly take me away from whatever entertainment world I was absorbed in.  If the glow of a cell phone comes into vision during a movie my attention immediately goes to the glow. Theaters are beginning to understand how distracting this is and include signs prohibiting phone glow, but it’s still loosely enforced.  I believe this will actually get better before my daughter is theater-going.  In a dark room only a tiny bit of light is required so there’s no reason a cell can’t have a theater mode as opposed to the nuclear blast setting it defaults to. Or maybe theater glasses allowing only the viewer to see the glow. 95% of people at a movie do not need to check their phones before the movie is over. Of the remaining 5%, 0% are teenagers.  Having all of this information at our fingertips is great, but with unlimited information comes unlimited distractions. If there are no places to escape these distractions we all go insane.

With the exception of the phone-glow section there’s a common theme here that, as usual, is best summed up in a Miley Cyrus classic. While the end goal is the same, the journey to the goal can have just as must value. But it would be naive to think that I was brought up in a more sacred time, or that my daughter will be worse off not sharing these small joys of mine. It’s just different and she’ll find small joys in other things; things I can’t even begin to predict. Pilgrims in the 1700s probably shunned Country Crock when it was invented in the 1950s, concerned that the next generation of pilgrims would never enjoy the natural high produced by churning butter. I’ll assume those facts are true, though I did just make them up. They are now on the Internet however, so consider them fact.