I’m in the habit of checking Google Analytics a few times per week to see exactly how people find this blog and where they are coming from. Most are from Massachusetts and probably represent my friends and family, but after 7 months I now have visitors from 48 of the 50 US states. The hold-outs are the Dakotas; nobody from either South Dakota or North Dakota have ever clicked on my blog. Like their Carolina and Virginia cousins, these states couldn’t get along and got a geographical-divorce filing irreconcilable differences (though I’ve heard rumors of infidelity between North Dakota and Minnesota). However, they can again agree on one thing; they have no interest in clicking on jasonmcgorty.com. 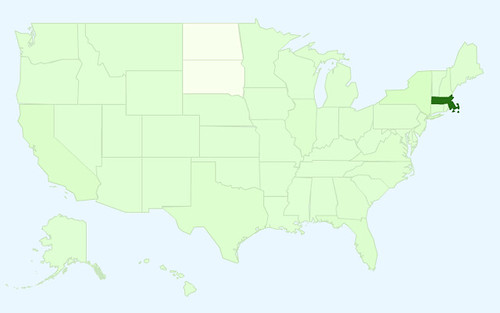 When I think of North Dakota I think of the movie Fargo, though the city itself seems like a sympathy gift from Minnesota. South Dakota makes me think of Mount Rushmore which, at least from the pictures, looks a bit underwhelming. I can see myself asking “now what?” after spending a few minutes looking at the executive faces. If Google Maps is any indication, the answer to “now what?” is “a long ride back to our hotel after a few drinks at the Red Garter Saloon in Keystone.” Clearly I don’t know much about either state, though I sought to find out why neither Dakota has been interested in my site.

North Dakota has the highest number of religious people per capita than any other state. They like fishing and hunting, and ice-fishing and ice-hunting, and their state beverage is milk. Due to absolutely no tourist destinations it’s considered the least visited state.  They seem innocent enough, and these rough-riders may not care for my edgy look at pop music and careless culinary creations that don’t contain any lutefisk. South Dakotians enjoy all of those things as well even sharing in the official state beverage of milk. These little similarities surely remind the Dakotas of why they made such a great couple in the first place. However, what seems to set South Dakota apart is its insistent push to pass anti-abortion legislation. I spent a good amount of time reading up on this, so this post is about to take a controversial turn.

In 2006 the South Dakota state legislation passed HB 1215 which banned all abortions, including those caused by rape and incest, with a vague exception only when a woman’s life is in danger. The law would criminalize doctors who preformed abortions outside of these parameters which would have resulted in doctors being too fearful of a possible 5-year prison term to ever get involved. 56% of South Dakota voters overturned this before it ever took affect. In 2008 “Initiated Measure 11” was introduced which added the rape and incest clause but was again rejected by an equally narrow margin. The people of South Dakota spoke twice, but instead of backing down and listening to the people the legislation started to get more creative in simply making it more difficult to receive an abortion. SB 92 was proposed in 2009 that would require a doctor to meet with a patient 24 hours before the procedure. It sounded innocent enough but South Dakota has only one abortion clinic and no South Dakota doctors are willing to perform one. Doctors are flown in from Minnesota for the quick procedure but this 24 hours waiting period would serve to make this journey impractical. Failure to meet with the patient would result in up to a year in prison. The sane parts of SB 92 did seem to narrowly pass and doctors are not required to warn of suicide and depression risks following the procedure. The debate seems to remain active today and may get a bit scary with this guy recently voted in as a state representative. He has several posts that quote the Bible in order to prove that abortion is wrong. I can’t help but think that the Bible’s authors and impartial translators would have chosen their words more carefully if they knew how it was being used today. They could have at least included a few asterisks. Something like “*Sometimes thou shault justh useth your own judgement as each situationth is different.”

The same people who supported the down-right ban also supported teaching abstinence as the only acceptable form of birth control. To no ones surprise, this black-and-white logic hasn’t proven successful. After watching a recent news-scare promo describing a violent home invasion I had a surprisingly apropos day-dream. What if someone was to run into my home, push my pregnant wife and kill my unborn child? I thought of whether or not I would press murder charges and concluded “of course I would”. But if this nightmarish situation was murder, how can I be pro-choice? The difference was stunningly obvious and surrounds a woman’s choice versus a violent act. However, for a moment I saw the other side. I am in favor of life and in favor of choice and anyone who sees this issue as that black-and-white should not be making laws for anyone. If a case can be made for both sides though, Pro-Choice seems like the only open-minded and “gray” side to take.

The cultural difference in the Dakotas is better represented vertically with East ND and East SD sharing larger cities and West ND and West SD sharing a more rural culture. South Dakota is so split on the abortion issue that Southeast Dakota and Southwest Dakota may be logical new states. Also, states cannot divorce as they have no marriage rights to begin with. That’s just silly. North Dakota and South Dakota split into individual states in 1889 as more settlers moved in for the rich soil and the larger Dakota state became too difficult to govern on its own.

So why isn’t South Dakota looking at my site? The urban east is most likely too busy fighting local legislation that seeks to repeal a 35-year-old law using 2,000 year old literature. The rural west probably couldn’t find my site anyways.