As a kid I loved bringing cucumbers to the beach. I’d dip them in the ocean, take a bite, and repeat.  The ocean salt spiced up the plain vegetable while oils of the Exxon Valdez added a savory flavor, and sewage added a tang. Mostly it was the salt though and I imagine I was not the first rebel to add salt to a fruit or vegetable using the world’s largest sodium vessel.

While I haven’t done this in years I can make a comparison to one of my favorite work-time breakfasts; an apple and a bag of pretzels. On their own they are dull and yearn to be baked into a pie, shot off the top of a jester’s head or smothered in mustard. But combined in alternating bites they are magical and do more than simply produce a salty apple. A few weeks ago I thought of how I could combine these ingredients in one dish and ultimately decided in the family-favorite apple crisp. 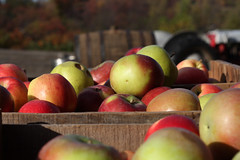 While preparing to be bored by the Super Bowl I decided to make an apple crisp to serve as dessert to treat my nursery-painting helpers. I followed a typical recipe of apples, flour, oats, butter, brown sugar and cinnamon but added a final topping of finely crushed pretzels rods as the final step. My concern was that the pretzels would become a soggy mess and ruin a perfectly good crisp. The output was predictably normal with the pretzels making quick cameos in selected bites. I was too careful in the this batch of crisp and used far too few pretzels. However, I did learn something; pretzels rods do not get soggy baked in an apple crisp. I needed a second try.

I called my wife into the kitchen yesterday to tell her I had a “revolutionary” idea. She knew to be concerned but she wasn’t prepared for what was coming. If cucumbers were so improved by the salty water, and the apples by the salty carb, then cucumbers and pretzels should be good combined in an apple crisp. I was certain I could prove this through a geometry-class style “proof” but opted for a revolutionary kitchen war between me and my more sensible wife. “I love you but you will ruin a perfectly good apple crisp” she cried as if mimicking a loyalist pleading against the Patriots fighting against the oppressive, yet familiar, reign of King George III of England. The apple crisp revolution would not come easy, I understood this. “If I asked people they’d all be on my side” she begged as if threatening to gather fellow redcoat soldiers to hold an intervention for cooking sanity.

As I was beginning to back down her land army proved weak after she received a phone call and was forced to retreat into the living room. A single lantern buried brightly in the kitchen suggesting a land attack was imminent once the call was over so I new to act fast. I cut the cucumber in half, peeled it, cubed it, and lined it on top of one side of the naked apple chunks. I quickly added the crisp topping, but this time I was more liberal with the pretzel rods both in quantity and size. I resisted the urge to take her red raspberry leaf, Celestial Seasonings, uterus-strenghtening tea and throw it in the Boston Harbor. It’s not that it wouldn’t have been a worthwhile protest, it’s just that there’s nowhere to park near the North End after those Italians moved in. After hiding the evidence I began the estimated 30 minutes baking process which ended up being half the time needed for this over-stuffed crisp. After a full 60 minutes I stabbed my bayonet through the center one final time and the apples seemed tender so I took it out for cooling.

Even I knew this wouldn’t taste good. It didn’t. Cucumbers are the only vegetable that I can think of that do not have any application in a hot dish. A baked cucumber tastes slightly worse than a baked zucchini. Now imagine covering something slightly less tasty than a baked zucchini covered in brown sugar and you have yesterday’s dessert. But not all revolutionary ideas have revolutionarily great results. Sometimes the “what-if” is so strong that fighting against the insane idea is harder than putting it to the back of the mind. I don’t regret the idea. I regret that it’s unlikely that my face will ever be on currency.