After a few week of seeing Occupy Boston in the news I wanted to take a visit to Dewey Square and see the tent city myself. I went with the goal to take the picture that would define a generation. A Flickr search shows 16,000 hits for the phrase “occupy boston” so time will tell if my photo is chosen. 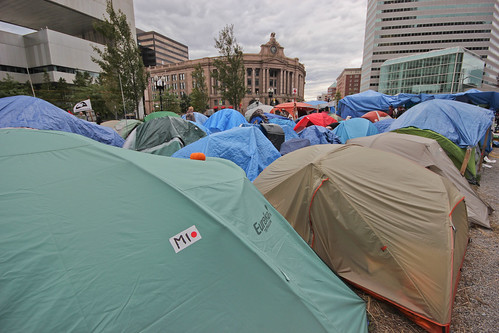 As I entered Dewey Square the first time I wasn’t too surprised to find out that I wasn’t the only visitor with a camera. The occupation was on display for roaming tourists on their way from South Station to the New England Aquarium. I figured it would smell, but it didn’t really smell like body odor and urine like I was expecting. Instead, it smelled like the final hours of a farmers markets, or more specifically, rotting produce. Everyone seemed friendly and if I had the nerve to pick up a conversation with a total stranger, I felt it would have been welcome. It wasn’t lost on the occupiers that the majority of people walking through the occupation were tourists interested in seeing the local news story in real life. As I walked by a group of 2 young men they sarcastically sang the chorus to “Smells like Teen Spirit” to their observers.

I took photos. Lots of street photos with both my zoom lens, and wide angle from-the-hip. There’s nothing really interesting or special about the photos, and with 16,000 others, they aren’t unique either. The experience did however humanize the movement and force me to think and better understand what it’s all about. I don’t agree with everything of course. I don’t see how bailing out college kids benefits the greater good and comparing students to banks in this situation doesn’t make a whole lot of sense. The fact that the 1% holds most of the wealth is certainly an interesting fact but I’m not going out of my way to picket how we overpay basketball players. It would be great if the 1% shared the wealth with the middle class, but that doesn’t seem like a realistic request to me. The 1% could pay off the national debt with the change in their couch, but the 99% could do noble things in theory as well. Asian sweat-shop workers make 3 pennies and a button every day making our iPads. If every 99%-er gave an insignificant dollar a day to these workers they could afford to take their families to the local all-you-can-eat buffets that litter the great walls of China. There are many issues I can get behind however. All social issues are a given, but in Boston, Massachusetts it’s like preaching folk songs to the choir. An issue that is easy for me to get behind is the influence of corporations in politics.

I have always wanted to believe that anyone can be president without the requisite indoor pool filled with gold coins. A politician needs to be unusually wealthy to get on the ballet. By definition, this person is most likely driven by money and taking office won’t slow their need for more wealth. I see parallels to this and the American Music Awards. In theory, anyone can be nominated and anyone can win. However, only those artists with the most airplay and sales can get on the ballot. Airplay is directly tied to major labels and music of the lowest common denominator which then drives sales. Organic artists without a corporate backing have virtually no chance to make the ranks of nomination.  An artist, or politician, with corporate backing will never have our interests in mind. Luckily independent musicians exist to give an alternative to the corporate slaw. If only we could elect indie-congressmen.

I tend to see both sides of most situations and am rarely on the extreme left or right of any highly debatable issue. Occupy Boston is no exception, but I knew I was on their side whenever I read or heard opposition to the movement that didn’t make any sense to me. I’ll discuss a few of these complaints below… 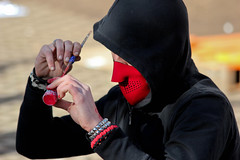 There’s a photo going around that shows a bunch of US soldiers with a sign that reads “Occupy Bagram. Quit your bitchin’ and get back to work“. The first thing I thought of when I saw this was the famous and historically inaccurate Marie Antoinette quote “let them eat cake” in response to the poor not having enough bread. Assuming that all the protestors are too lazy and cranky to work is as misguided as assuming every banker is snorting cocaine with billion-dollar bailout bills. While lazy people exist in every tax bracket, there are millions of people who would do anything for decent employment today. If it was just a matter of “quit your bitchin'” then everyone who wanted a job would have one. There’d be no one occupying city parks with signs and tents if everyone could just shut their cake-holes and go back to their stable and life-supporting jobs.

While I was playing paparazzi to the occupiers, a convertible cruised down Atlantic Avenue with 3 college-aged girls. As they passed a middle-aged female protester they screamed “get a job!” and she responded in angst with “I have one!” While there is no hard evidence to prove this, I quickly imagined that these 3 screamin’ ladies are occupying an ivy-league college on their daddy’s dime and had never worked a day of their lives. This interaction isn’t unique at Dewey Square but it most concisely sums up the most common misconception that people have towards the occupiers.

How does camping in tents accomplish anything?!?!$%

In short, it doesn’t. They are not magic problem-solving tents.

The only reason that I’m writing this, and you’re reading this, is because of the occupy movement. It’s the only reason I thought of the ridiculously clever analogy between the election process and the American Music Awards. Even if the movement was made up entirely of entitled white kids and homeless people it would still serve a purpose; it brings all liked-mind people together to discuss their ideas and solutions. It’s given Noam Chomsky, Roseanne Barr, Michael Moore and Pete Seeger a platform to speak and get media attention. These people aren’t looking for handouts.

It’s just a bunch of wussy kids that want everything handed to them!?!?!?!

There’s some truth to that I’m sure. If I received a trophy for simply trying I’m not sure I’d be motivated to try much harder in the future. But I think that simplifies everything. Kids may be inherently lazy, but they’re not stupid and can separate reality from reality TV and video games. Their biggest asset in situations like this one is their honesty and not-yet-acquiried compliancy.

A 5 year-old is uncensored. He sees a fat and old relative, points, and says “you’re fat and old”. He’s not wrong, and his warning could help with the growing diabetes problem in the US, but in a few more years he will learn to censor himself. He’ll learn that it’s okay to speak in a hispanic accent when the situation dictates, but not an Asian accent. Or that while country-of-origin and gender play a huge role in who wins a marathon, it is only okay to split up the marathon by gender. These double-standards need to be taught as they otherwise make no sense.

By the time he is ready for college he sees the world of opportunities at his feet and he’s not wrong. His twenties are viewed as a virtually endless and optimistic time of youth. The world’s problems are frustratingly ridiculous but the twenty year-old hasn’t yet learned to censor himself into compliancy. He has nothing to lose but is now old enough to make people listen. Once he hits thirty he’ll have everything to lose; family, job, house, cable internet, etc and the torch will be handed off to the next generation of free thinking rebels. Twenty year-olds can change the world. Forty year-olds are looking to keep their rickety ship afloat long enough to retire. Every hippie graduates to either a compliant corporate crony, or lives on the edge of homelessness.

This Billy Joel lyric sums this up best…

Wait, no, this lyric…

I believe I’ve passed the age of consciousness & righteous rage
I found that just surviving was a noble fight.
I once believed in causes too, I had my pointless point of view,
Life went on no matter who was wrong or right, ohhhhh

The angry young man has the uncensored view of what’s right and wrong regardless of how pointless and unwinable the fight is. He will turn into the angry old man eventually and rely on the next generation to continue the good fight. Any positive change in this country will start with the young and their radical plans, their refusal to bend, and their refusal to crawl. Each generation has a solid 10 years to make their dent.

It’s a club-med for homeless people

So what? This critique may more accurately depict how terrible the lives of homeless people must be, and how horribly they are treated. Does a place to set up a tent, free donated fruit and breads, and a group of ears and eyes represent a homeless man’s all-inclusive, Mediterranean vacation? If so, score one for the occupiers. 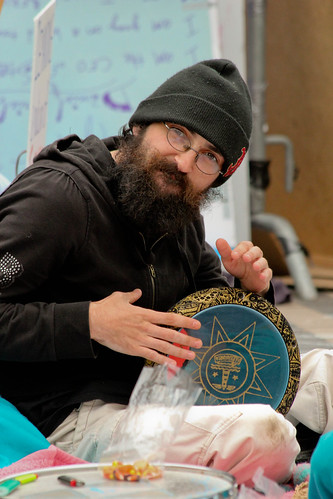 Having a leader would be a huge mistake. People are faulty, and no matter how kind and honest they are, they most likely have a regrettable tweet out there. Once someone finds that fault in the leader it will be used to paint a negative and unfair portrait of the entire movement. Having a goal assumes their movement has an end, and it should not. As mentioned before, giving people a platform to discuss solutions and bring attention to otherwise ignored issues is reason enough to occupy. 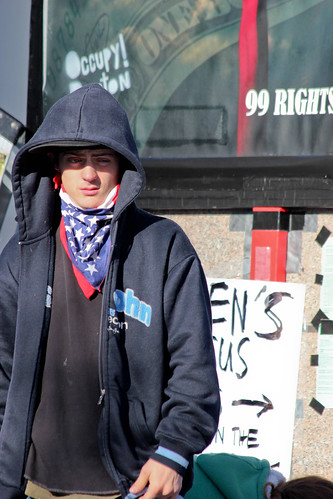 Wandering the square with a 300mm zoom lens it’s easy to see the faults and holes in this movement. Young hippies caught up in the momentum speak about over-throwing the government and switching to the barter system. Rotten fruit barely covers the stench of weed and sweat. A fresh college graduate gets frustrated that he can’t find a job in a few months and protests against his personal misery. A man poops on a cop car, and spits on a police officer. Those black marks on the movement make headline news and fodder for right-wing talk radio but don’t define the movement.

Occupy Boston, and the occupy movement as a whole, is best viewed at a wide 10mm. Individual incidents and singular, unrealistic and anarchistic ideals shouldn’t overshadow the overall good that could come out of something this large and powerful.