Over a year ago I introduced a series called “McGorty Plays…“, where I would vainly record myself on the piano for a few minutes. I picked four artists to create four separate videos but the series didn’t have a part II until today. I had ideas since then, but I could never really decide on a single theme for long enough to spend the effort to set up the tripod.

For this go ’round I let the power of the radio decide. As I entered my car last Tuesday at around 5:15PM I put on the radio station KISS 108. The next 5 songs that they play would be used for my next video.

Texting while driving is dangerous, no doubt, but the old fashion note-taking-while-driving has got to be worse. I didn’t recognize half the songs that were played in this drive so I knew I had to write them down. This is my chicken scratch. 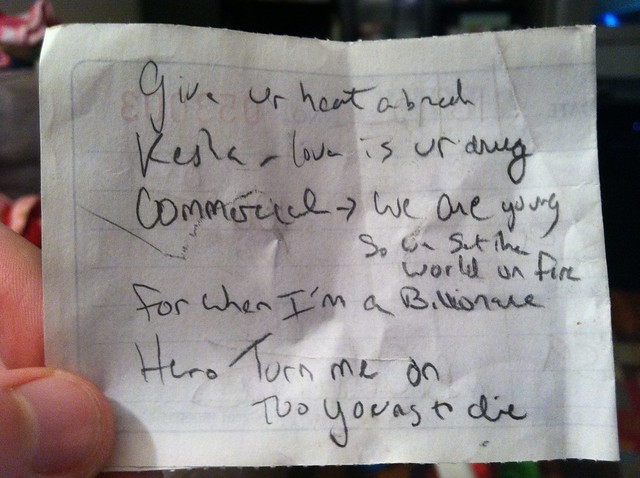 I took to the YouTubes and found what these songs actually were. I had heard the “Fun” song on that car commercial and had heard the Billionaire song a few times. The rest were foreign to me. I’ll save the apologies for after the video. After the first take was rudely interrupted with a cell phone call, here’s take 2…

The cricks and creeks in the video are the creeky stool and foot pedal. It is (probably) not the sound of the bones of a man in his thirties playing music written for 15 year olds by a committee of 40 year olds.

I can find the good in most music. The Nicki Minaj and Demi Lovato songs are fine. They’re catchy and hummable, and I’m sure they provide a proper pubescent soundtrack. I’ll forget they both exist in a few days. The Ke$ha song is MTV’s answer to water-boarding. I could stand to listen to it once and only allowed it to take up a few seconds of the video.

I was surprised how much I ended up enjoying the .fun song. The chorus is now overplayed thanks to the car commercial, and the fact that the radio plays it every 5th song today. However, the entire song is interesting to me. I really like how the first and second versus are almost completely separate melodies and the chorus is never really over played. I liked it enough to download the entire album but I ended up being disappointed. The comparisons to Queen and Mika are warranted, however, the overuse of auto-tune will likely mean I never give it a second listed.

Here’s the song list, in the order I played them, with links to the real recordings…