This morning my wife sent me to Whole Foods with the following list: 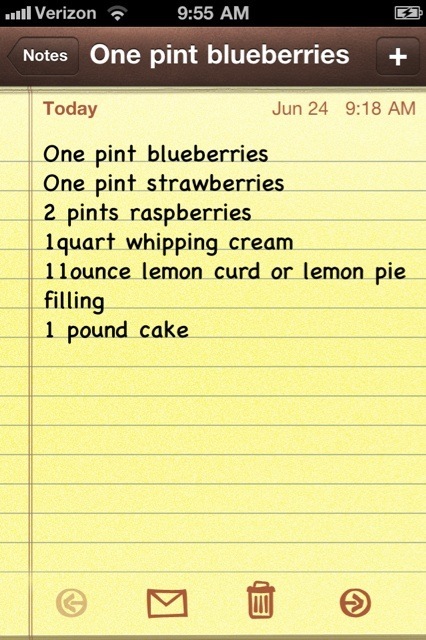 We were in charge of dessert for a party and my wife wanted to make a berry trifle. How much would you pay for a berry truffle that yields 4 servings and has a “level” of “easy”? $15 sounds fair to me and was what I was prepared to pay for the ingredients I didn’t already have in the kitchen.

I’m going to jump to the punchline up front here. The price for the ingredients that we didn’t already have in our kitchen would have been $73.92 at Whole Foods. However, I ended up leaving the grocery store feeling guilty enough to purchase some garden roses and lemon curd for a total of $19.79. A complete description of the event follows.

I took the kid for a short walk to pick up the trifle ingredients and let my wife get ready for the party. This is generally a happy time for both of us and we have in-depth, though one sided, discussions. Just last week we discussed the parallels of the organics movement to the not-in-my-backyard mentality. She’s 13 months old but I felt she saw the grey area in organic produce.

I paid my $2.49 for a medium iced coffee at Starbucks before walking the stroller around Whole Foods; one hand pushing the stroller, one hand holding the coffee and the third hand holding the basket. I first stopped at the florist and some garden roses caught my eye. They seemed more involved then your typical roses and I asked the nice lady what they were and if the buds were ever going to bloom. She laughed and said no, they won’t bloom. She also giggled when I commented that the roses “had more going on” then typical roses. I placed the roses in the basket with my forth hand.

My next stop was the dairy aisle with the task of “1 quart whipping cream”. The cream was measured in pints but google on my iPhone was quick to do the conversion (2 pints in a single quart). We now had flowers and 2 pints of cream in the basket.

The first complication came with the “lemon curd”. I had never heard of this and certainly didn’t know where to find it. I first checked the baking aisle but after about 2 minutes of searching I asked for assistance. I was a bit surprised when the guy knew what I was talking about and seemed to think they did have it. He went down a few aisles, asked some green-smocked friends and eventually went out back for what seemed like twenty minutes. He returned to tell me they were out. The trifle was ruined, I thought, and I called my wife to explain. Should we just curd our own lemon, whatever that means? After a quick brainstorm we figure lemon pudding would be okay, but of course, they didn’t have that either. Under my breath I muttered something about how they don’t carry enough lemon products and a new green-smocked man runs over and hands me a jar of lemon curd. I don’t know where he found it but it was implied that it was the last jar, possibly the last jar of lemon curd on the planet. It was mine and I proceeded to the fruit section.

The produce section was where I first learned that I may need to take out a loan for this trifle. We needed a pint of strawberries, a pint of blueberries and 2 pints of raspberries. Berries are packaged by ounces but the iPhone again came to the rescue as both a calculator and measurement converter. Raspberries were $6 per 6 ounces and there are 16 ounces in a pint. I put 6 of these containers in the basket and moved to the bakery. I did start to think that I just placed about $30 of raspberries into my basket but I continued anyways. The baby couldn’t understand everything that was going on, but she looked at me in a way that let me know she understood that she wasn’t going to go to college if we make this trifle.

I have some bakery experience. We made pound cake and they came in loaf pans and I assume they were priced at around 3 bucks each. Whole Foods had these weird pound cake chunks that were made by some another company and shipped in. They didn’t come as a whole loaf and were branded as “1/4 loaf” with a price of $5.99. This is when the price hit me. The pound cake alone was about to cost $24. I called my wife and explained that this trifle is about to cost $60, though I had no idea my estimate (meant to shock the listener of course) was actually a low estimate.

We agreed that creating this trifle from ingredients bought at Whole Foods would be ridiculous. Standing in the bakery already I saw they had pre-made, and giant, strawberry shortcakes for $26.99. This is cheaper than the price of raspberries alone. The problem was there was no way I could carry a delicate, whipped-cream covered dessert home while pushing a stroller. We agreed to abandon mission and just pick up the cake on the way to the party latter this afternoon. The 30 minutes in the store was for not.

I wanted to just put my full basket on the floor and walk out but I understand that’s just rude and I started putting the food back in their proper place. The basket gets down to just 2 final ingredients; lemon curd and garden roses. I can’t put the lemon curd back. For one, I have no idea where it goes. If I just put it anywhere then some employee is sure to find it. And what if it’s one of the people that helped me? I couldn’t sleep at night with the image of their disappointment in my head. I had to purchase the lemon curd. I then proceeded to the florist to return the garden roses but I made eye contact with the nice lady who shared some giggles with me. What would she think if I came back 30 minutes later and put those flowers back that we bonded over, leaving nothing but lemon curd in my basket. I proceeded to the check-out counter to spend $19.79 on garden roses and lemon curd just because I didn’t have the heart to put them back on the shelf. It’s not uncommon for me to be at this Whole Foods twice in a given day (today, for example). I wasn’t going to be known as the guy who isn’t grateful for being given the last lemon curd.

When I did get home I made sure to document all the prices while still fresh in my head. Here’s a fancy chart.

In conclusion, does anyone have a good recipe using lemon curd?