Take lots of pictures. You have a 16gb memory card? Great!

See that sunset? Take 30 pictures of it. Is that the Golden Gate Bridge over there? Take 30 more pictures of that.

Now upload all of those photos to Flickr and Facebook. Don’t look at them first. Hosting on these sites is now free! Surely your friends and family want to see all of them!

This internal voice talks to all of us who walk with a digital camera and have a mother who has told us we have an eye for photography. This includes the majority of those under 40 in the western world.

There is no financial cost to taking an infinite number of photos. There was a time not long ago when a film developer was a valued trade but in the past two decades it has now gone the way of the whipping boy or a broomsquire; a dead or dying profession. Technology has removed virtually all barriers between the photographer and the actual photograph.

The ridiculous and italicized scenario in the opening did not affect the pockets of the fictitious vacationer. It is very tempting to take thousands of photos on vacation. I do it, and will continue to do it. However, there is a cost that comes in uploading all content to social and photo sharing sites: saturation and apathy. When the world has a camera in their pocket, curating the raw batch of photos into a presentable (smaller) group is a large factor that now sets good photographers apart from a novice. Pride and a bit of extra effort can replace what used to require a year in photography school. But when the photographer is no longer required to think about the act of photography, they are less likely to take pride in the final output.

For the sake of my own argument I’ll consider operations outside of the auto function of a camera to be advanced and skilled labor. Same goes for basic post camera editing including cropping, leveling and filling/darkening light. My solution against saturation and apathy is for the photographer to go through their 4000 photos and pick the best 100 to share. I understand this is like telling an overweight person to eat fewer snickers bars. It’s easy on paper. However, both of these skills, deleting 90% of photos and eating less junk food, require no skill or training yet produces a far more desirable output. I will discuss some examples below. These are screenshots from anonymous Flickr pages with the intent to better the world’s digital photo album, not shame an individual. They are real, but nameless. 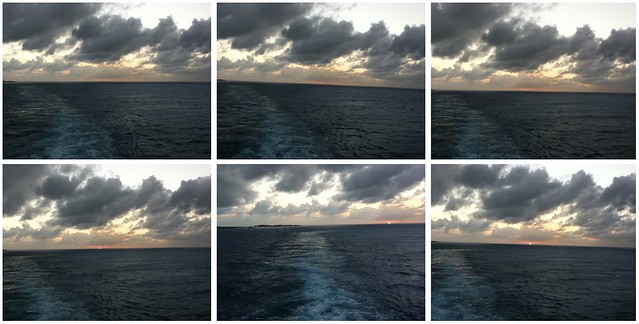 This is the classic example. These 6 photos are fine and are no worse than ones I may have taken. However, the repetition comes across as lazy. I’d pick one (really any one but the 5th one which has too much boring ocean to me). Straightening out the horizon would be nice, but as I mentioned before, I’m considering that an advanced technique.

With digital photography there’s often no reason to get it right on the first try, especially with still subjects. The idea here is interesting. The student sitting on a bench is framed by the circular end of the bench. The camera is likely sitting on the bench so it was just a matter of playing with aperture and focus. The left photo was a bit too shallow and the bench student is too blurry to really make out. It’s unclear where the focus should be. The second photo works and it’s clear the subject is the sitting student. However, the fact that both photos were uploaded suggests to me that the creativity I see in the latter photo was likely accidental.

This is a fine picture of a dog and his(?) birthday cake. I’d want to take his picture too if I spent the time struggling with him to put that hat on, and then convince him not to eat the cake for long enough to snap a few pics. Pic 1 and 3 are identical making it a candidate for Issue #1, but the photo of concern here is the middle one. It’s blurry. Maybe the dog moved, or the camera shook, but the photo is clearly one that should be thrown away.

So what’s the cost of taking digital photographs. Once the equipment is purchased the cost is $0. But with that comes responsibility and self-control.