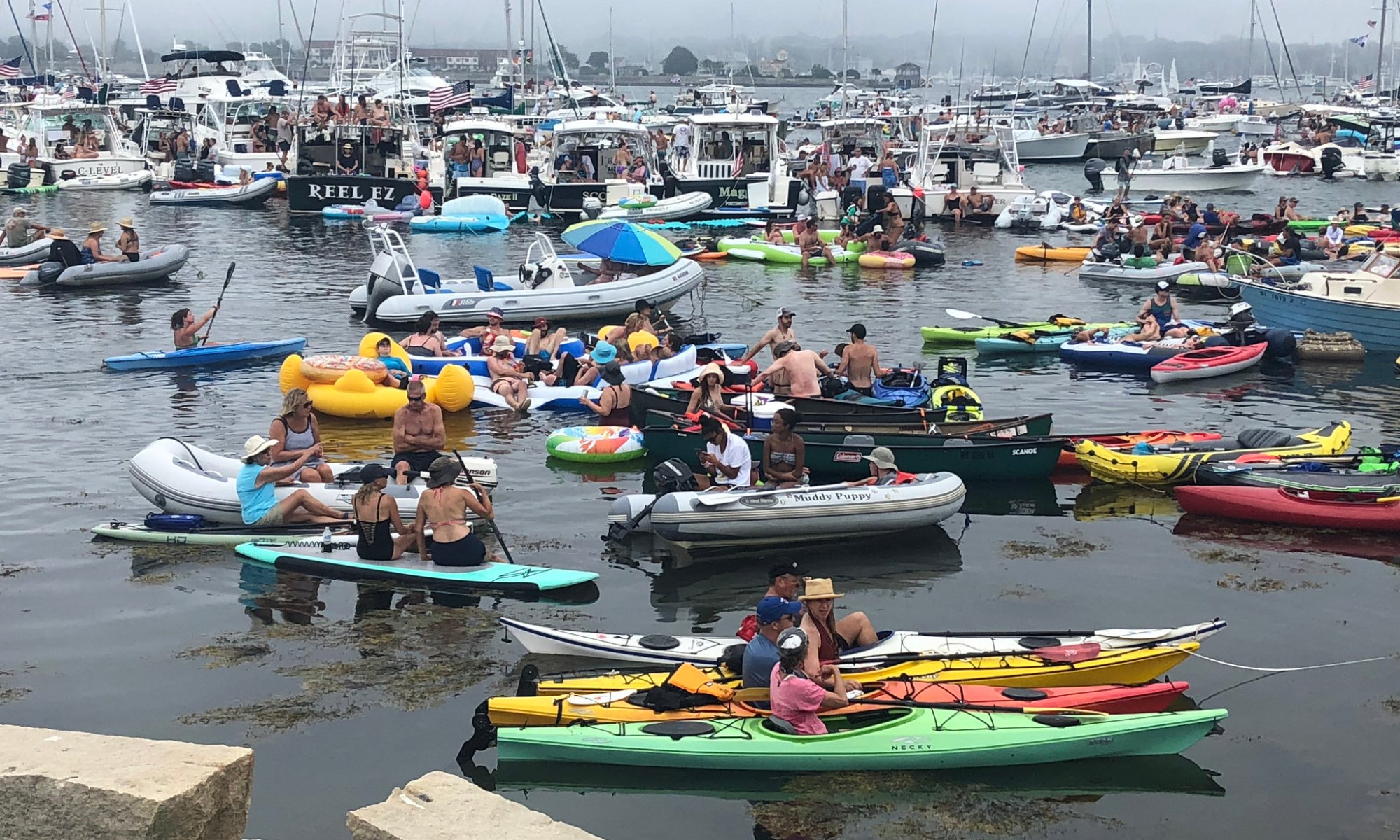 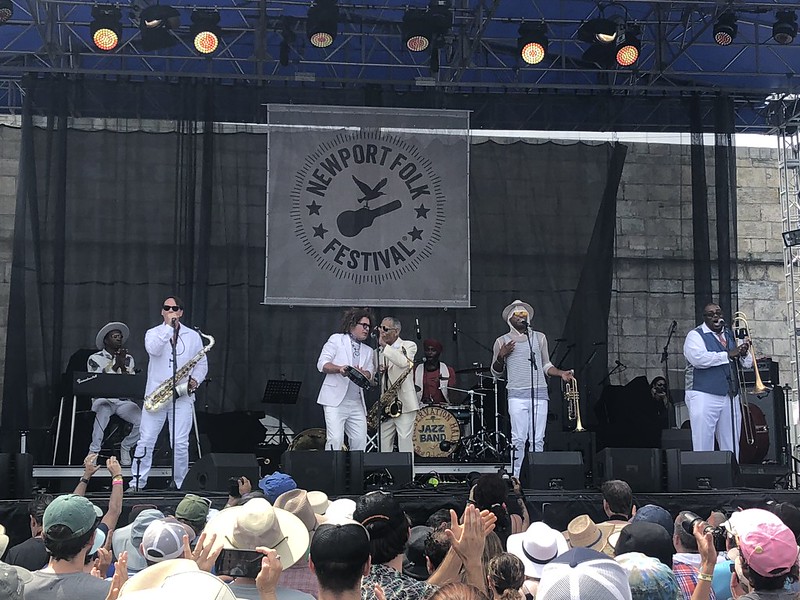 Sunday began with a Honk! / Marching Band that I had seen a few times before. While exciting, all that I could think of during this set was whether or not I wanted a lobster roll 3 days in a row.

For just a man and a guitar, Passenger put on a full and entertaining show. He seemed humble and kind, and as excited to be at Newport Folk Festival as everyone else was. He was singing with us, not to us. It wasn’t lost on me that he was singing these woke songs of equality with million dollar mansion in the background that help illustrate the issues with the distribution of wealth. It’s something that I’m sure goes through the minds of most festival goers. 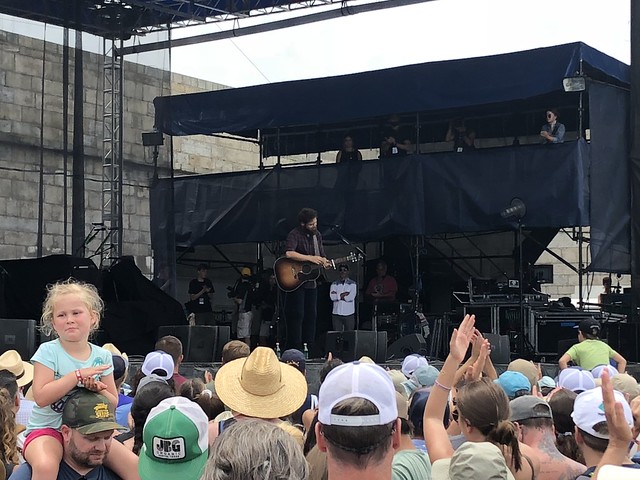 I knew he had a song I knew. “Let it Go” was probably on the tip of my tongue, but I had the sour taste of Mumford & Sons slopping around my mouth.

He won the audience over with his song “I Hate”, which appropriately lists things he hates, but in a quirky and likable way. As it listed both racism and toilet lines, it played well to the folk audience. He lost me when he poked fun at Cher’s face though. The hate should have been directed to a society that focuses on the young and perfect, and one that likely wouldn’t hire a 72 year old woman that looked like a 72 year old woman. The song was woke for 2015, but needs work for 2018. 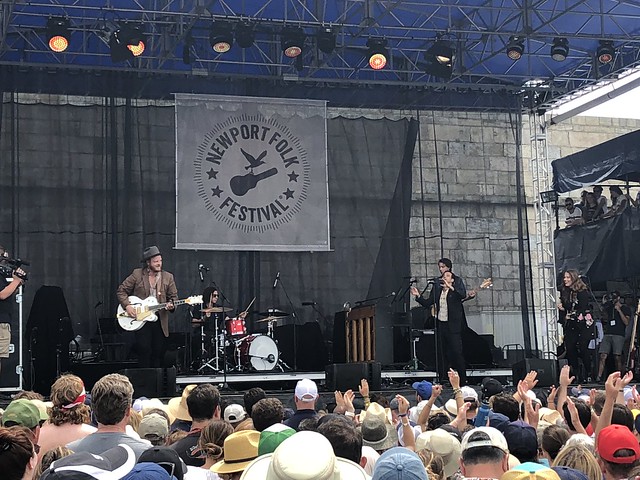 The Lone Bellow was everything I wanted at Newport Folk Festival in a band that I didn’t know anything about. Zach Williams was the likeable preacher that fronted the band from every corner of the stage at once. I hope he found a place for a nap afterwards.

On paper Brandi Carlile was the artist I was most excited to see, and she exceeded my expectations.

There’s something special about her that’s hard to define. At the surface she’s an excellent rock star, and folk artist, and a story-teller, but there’s something deeper. Over the years when she’d come up in conversation people go out of their way to tell me that they were fans of hers as well. These are people that I otherwise wouldn’t expect to have much overlap in musical taste. She has a way to make all of her fans feel as if they have a unique bond with her, as if she’s some niche underground artist. She’s done something right to reach this level of success, while appearing completely grounded and relatable.

I’ve listened to her new album many times, but I have a way of not really processing the lyrics as much I do the melody in general. She introduced her song “The Mother” with a heart-warming story about her now 4-year-old daughter, who was carried by her wife. I’d heard the song many times, and I think I thought it was about an old woman, simply because “Evangeline” sounded like a old person’s name. But no, Evangeline is the name of her oldest, yet small, daughter and the song was about her internal struggles with being a mother to a daughter with no blood relationship. The song’s verses end with…

“I am the mother of Evangeline”

The crowd erupted with approving applause but what couldn’t be heard was that every fan in the audience was overwhelmed with a wave of emotion, and possibly tears.

“You are not an accident where no one thought it through
The world has stood against us, made us mean to fight for you
And when we chose your name we knew that you’d fight the power too”

The Newport audience was now hers. She could have taken a hat, walked around the audience, and collected enough money to put Evangeline through college. We were all a part of her struggle.

Another highlight was her cover of “Babe I’m gonna leave you“, which was more Led Zeppelin than Joan Baez. It was in my head that Robert Plant would come out and sing the rest of the song with her.

Early in the set Brandi threw a pic out into the audience and by a miracle of luck and wind it fell right in front of me. I picked it up and opened my wallet to give it a safe and temporary home. The young couple behind me were audibly and comically disappointed, so I turned around and gave them my condolences while saying that I wasn’t going to be donating it to them. They understood. As I turned around to continue watching the show I was comforted in thinking that they’d catch the next one. The odds were terrible, but somehow the next pic that was thrown landed right in front of them and they picked it up.

I understand how odds and luck work, and I know I have no physic of telekinetic powers. Also, it was the same person throwing from the same position with similar weather conditions. However, I’d rather think it was the power of Brandi Carlile making me feel special for being a fan. Maybe everyone at the show believed that they caught a pic, and that their followup wish for a stranger to share their joy also came true.

A Change is Gonna Come

The Swedish couple from the Saturday page had told us that Jon Batiste was going to lead the closing set of Sunday. I don’t know how they knew this as it wasn’t advertised, but clearly it wasn’t intended to be a secret if they let Sweden know about it. 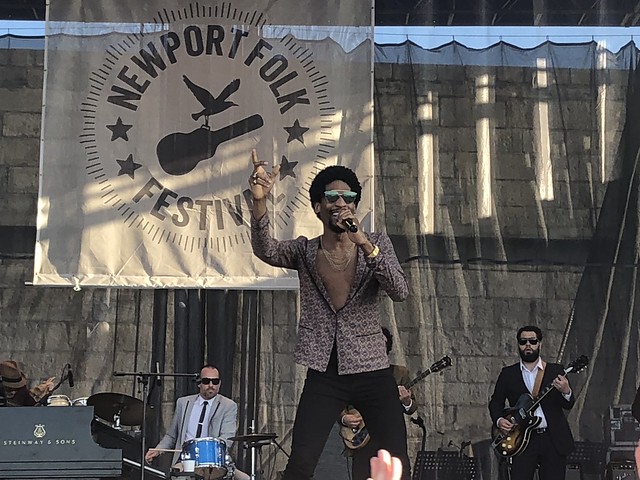 I wasn’t sure what to expect, but I think I imaged some nice campfire sing-a-longs in the style of Pete Seeger. I didn’t expect it to be the virtuosic musical romp that it was. Jon Batiste got all the jaws to drop with a mind-boggling solo piano rendition of the Star-Spangled Banner. Chris Thile, another guest that I’d expect to see at Grey Fox over Newport, joined for a few songs as well. He and Jon did the Punch Brother’s tune “My Oh My”, which on the album was about 4 minutes long but their duo version seemed to last at least 10 minutes. It’s possible that their performance overstayed its welcome on such an action packed stage, but it felt organic and fun. They made the impossible look easy, but it was far from campfire music. 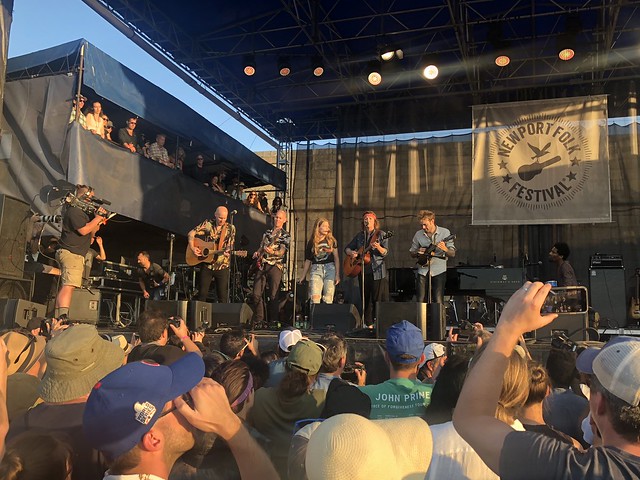 There were also the songs I’d expect including I’ll Fly Away, This Land is Your Land, and The Times They Are A-Changin, with guests from the day including Brandi Carlile and Mavis Staples.