The Discovery Channel show “Naked & Afraid” ranks all contestants on their PSR, or, Primitive Survival Rating. I figured the show just made that up, but it’s a thing. The Discovery site has an online test so everyone at home can know their own PSR. I answered honestly with what I think I should do and got a 9.0 out of 10. In practice I probably would just hit refresh on my phone’s Foodler app looking for a pizza place that delivers to The Amazon until my phone, or my body, dies. I understand that the point of the quiz is not to access ones survivability, but to have something flashy to post to a Facebook page and drive traffic to their site. Regardless, if there was a question regarding air conditioners and roof access my PSR would have been lowered.

Late May is air conditioner season in New England. Homes are old enough where the installation of central air would be more difficult than having the the house torn down and built again. Instead we have individual-room wall units that cannot be installed gracefully, which I prove true every year.

I am old enough to have purchased a TV when they were massive boxes and not the nice flat kind that can be carried without the need to bribe friends. In the early 2000s I wondered why the technology of the television hadn’t drastically changed in 40 years. My wonder was soon answered with the advent of flat TVs. My wonder on why there is no flat (or HD) air conditioners (HDAC) has gone unanswered.

This week was hot and after a few nights just suffering though I decided to bring up the bedroom air conditioner. I wrote about the rough winter in a few earlier posts and glossed over jumping out this same bedroom window to shovel snow off the roof. Dropping 6 feet onto a pile of snow is fun, and falling down afterwards is kinda funny. But the same fall without the snow is less forgiving (but still kinda funny).

There are 2 windows that exit out onto the roof of my house, but at the time I was only focused on the bedroom window. As I put the AC in place I grabbed the usual pieces of wood to stick under and support the unit. It fell off onto the lower roof.  I grabbed the second piece of wood and it had the same fate. But I didn’t care, I could just jump out the other window like I did over the winter and place the wood in its place from behind, a much more convenient angle anyways.

I was wearing shorts and a t-shirt. No shoes. I jumped out the window and as soon as I hit the roof I quickly thought ‘wow, that seemed dangerous’. Focusing on my task I put the wood in its place and was confident that the AC was now properly installed. I returned to the open window and quickly realized it’s not as simple to climb back into as I remembered it being in the winter.

The window ledge came up to my chest. I know what you’re thinking now. That can’t be that hard to climb back into. You’ve seen Tom Cruise jump to a window on an higher floor while hanging hundreds of feet above the streets of Dubai. But there’s a few factors in play. First, I’m no athlete. The entire first paragraph was there to foreshadow an event that would lower my PSR. Second, while Tom Cruise didn’t care if Dubai’s Burj Khalifa was damaged, I was looking to keep my vinyl siding intact. I could have grabbed onto the vinyl strip that based the window, and climbed up with my feet, but the siding would almost certainly have been compromised. There was a second thinner and harder lip to aid in keeping the window shut that was also a factor. This is the lip that proved most problematic.

To my immediate right was where the roof begins to slope. I can climb the slope to get higher up, but the higher I climb, the further away the window becomes horizontally. I climbed a few feet to my right, just enough to stick one of my feed onto the ledge. Without shoes the aforementioned lip would unpleasantly dent into my foot. But even without that there’s no way I can fling myself through the window, and I don’t think anyone besides a circus-grade contortionist could have lifted themselves through the window at that angle. I switched legs and stuck another foot on the ledge. I’d fall in a different direction, and break a different arm, but the outcome would be the same. I tried the original leg again to get a proper sense a comparison, but it didn’t matter, this method wasn’t going to work.

It’s at this point that I realize I’m stuck. I’m not stuck in an urgent, life-threatening kind of way. I’m stuck in a somewhat comical way and I’m unsure how to escalate my need to get back inside. I looked down and the concrete driveway was 12 feet below me. The fall wouldn’t kill me, probably, but even I realized I’m not at the point of jumping yet. I could probably climb in through the other window which housed the freshly-installed AC, since that’s over the part of the roof that slopes. This means pushing the AC into the house, possibly damaging the unit, and I’d have to touch that ouchy outside part of the AC that designed to give parallel papercut-like wounds.

Now I realized I may be a spectacle. I paused for a minute and looked around at all my neighbors. I envisioned people settling in with a few beers and friends to figure out just how I was going to resolve my situation of questionable and confusing urgency. No one was in sight. 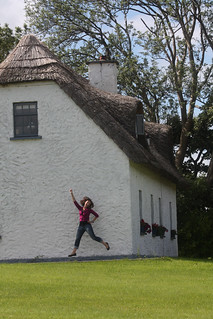 My next primal instinct was that of MacGyver. If I could just raise myself up by even a single foot I thought I could get in. I could have screamed for my wife and had her throw me up a step stool, but it seemed too early to call for re-inforcements. The only tools at my disposal were what I could sort of grab at in my 4-year old daughters’ bedroom. A fleece “Sofia the First” blanket was the only thing I could pinch and retrieve, but it served as my eventual tool for re-entry. I thought at first I could step on it, but no, that would raise me up by only a compressed inch, and then how would I get the blanket back.

The solution was to place the blanket over the window ledge to alleviate the pain from the dreaded window ledge lip. I was able to pull myself up using my forearms and eventually get my chest onto the ledge with my legs dangled at a 90 degree angle. Like the most graceful whale-on-land, I flopped through the window chest first, successfully completing my mission.

Each contestant on Naked & Afraid is allowed to bring one “helpful item”. In most cases they bring a hatchet or a fire starter. I’m not sure if I’d chose to bring a Sofia the First blanket as my “helpful item” but it would certainly solve the ‘naked’ half of the show title’s dilemma. In my situation a hatchet or a fire starter could have only made things worse. I’m grateful for the blanket.