On paper my résumé for photographing bridge jumpers is very impressive. It spans 10+ years and 5000+ miles; from the Northeastern corner of the US to the southwestern end in Hawaii. All of that is true, but my experience is limited in part to a chance experience in Hawaii in 2005 as depicted in the photos below. It’s a classic story of locals drink tequila, locals jump off a bridge. 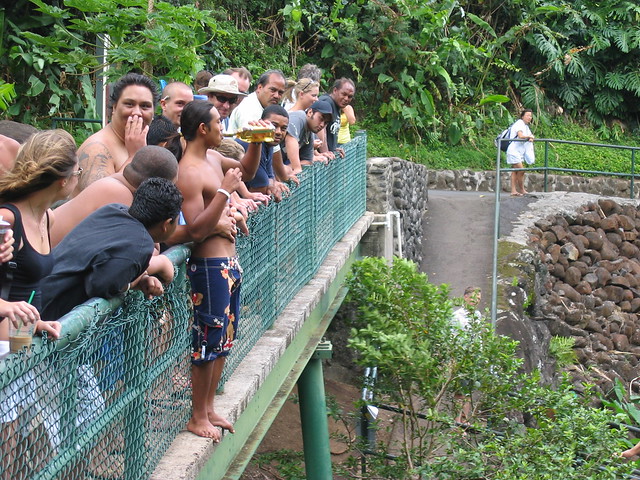 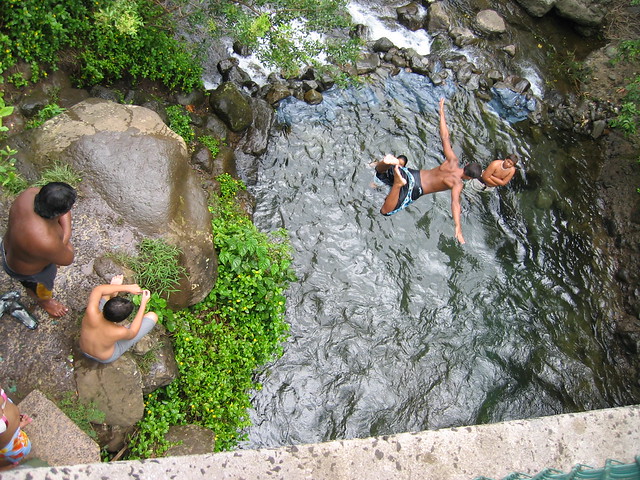 All of my other experiences comes from Martha’s Vineyard in the last 5 years. It’s limited to early August, and at around noon time, so the variables in light are limited to clouds vs. sun. It’s also focused only on the Jaw’s Bridge in Martha’s Vineyard, but it’s arguably the most famous and family-friendly bridge for jumping into water. This guide is focused solely on that bridge, and its 3 affordable vantage points, in order of simplest, to most difficult/rewarding.

A man-made rock edge runs perpendicular to the bridge which separates the sand from the river which flows between the lagoon and Atlantic ocean. There’s probably a more accurate word for it, but it creates a comfortable head-on view of the bridge. The rocks provide a convenient seat for the photographer to sit comfortably between 25 and 100 feet from the bridge jumpers. This view allows the photographer to capture a group of ideally symmetrical jumpers together. The challenge at noon in August is the bright summer sun coming from nearly directly above us. The bright light-blues in the background can easily cause the jumping subjects to appear too dark which can be righted by a light-fill through photo editing software, however, too much of this effect makes a photo look too cartoony to me. 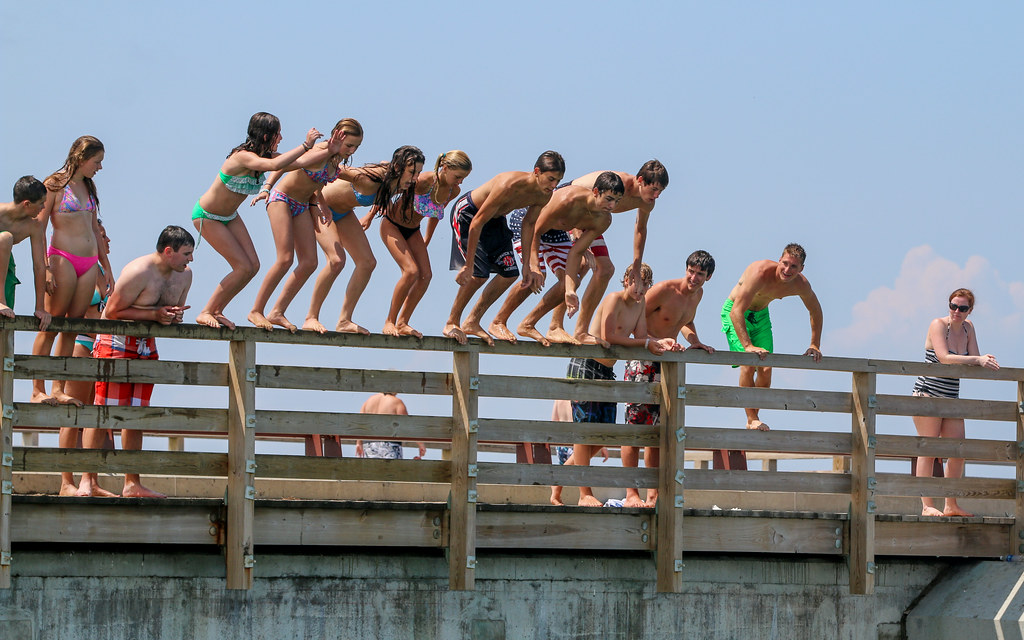 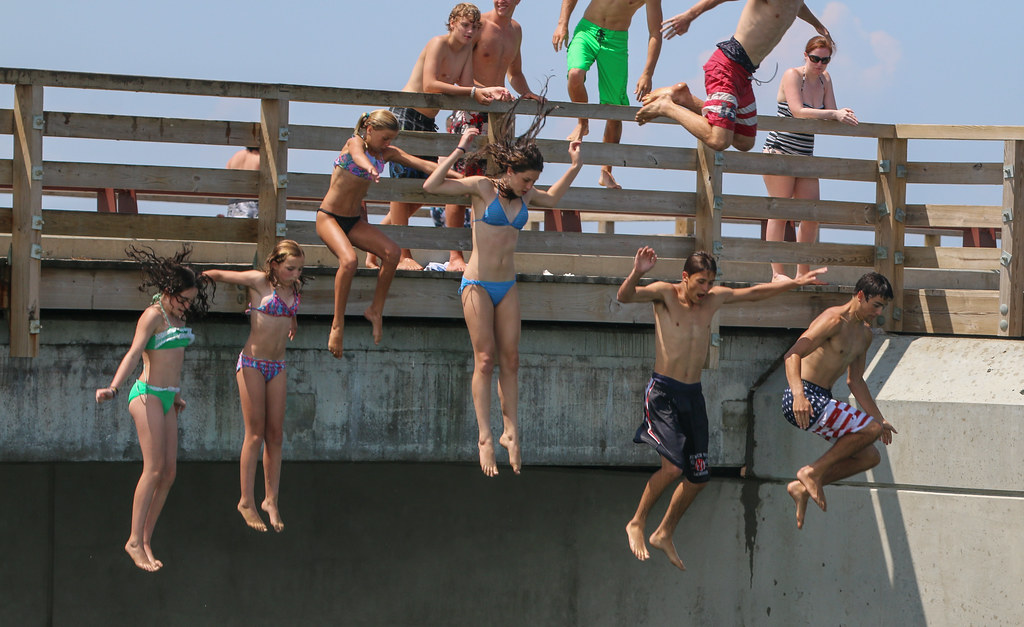 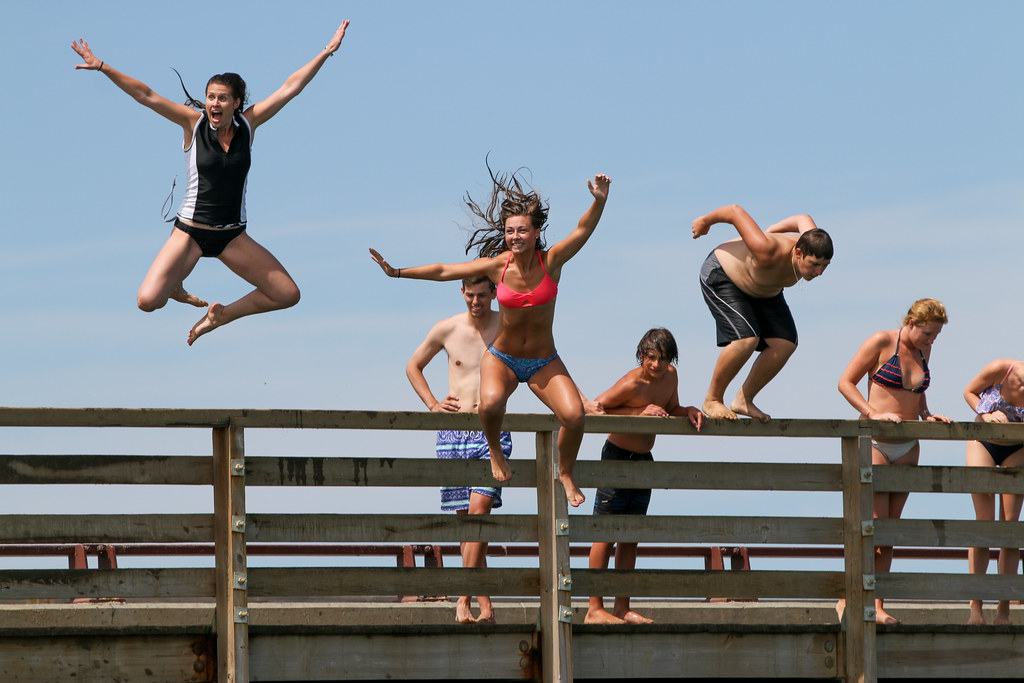 A cropped photo is never the intent but a zoom lens can only do so much. When a shot from this vantage point does single out a specific jumper a crop becomes necessary. 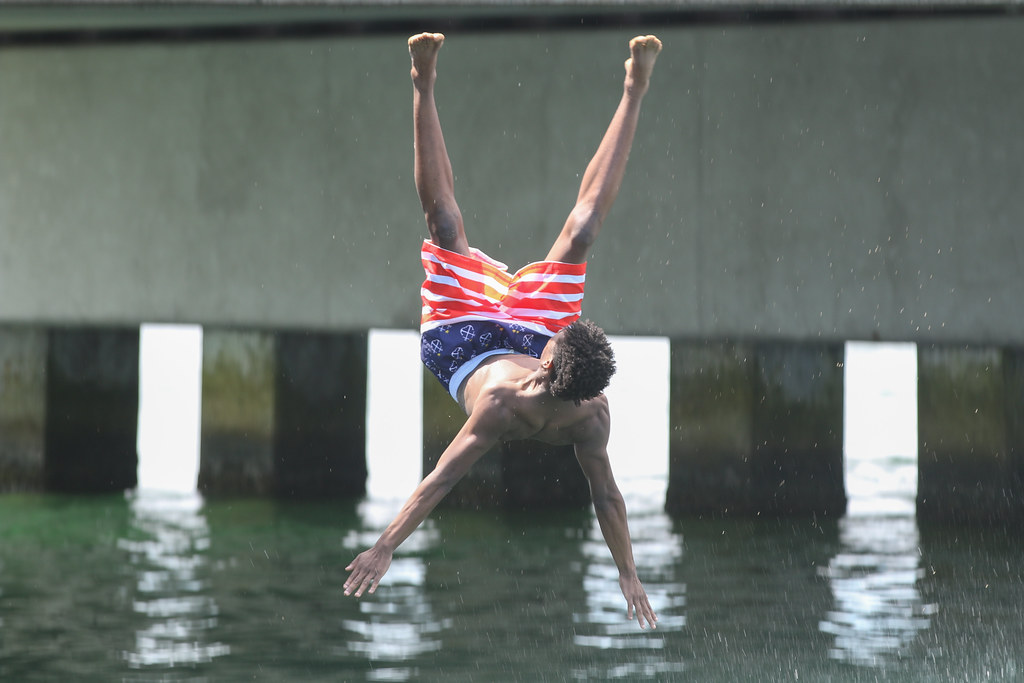 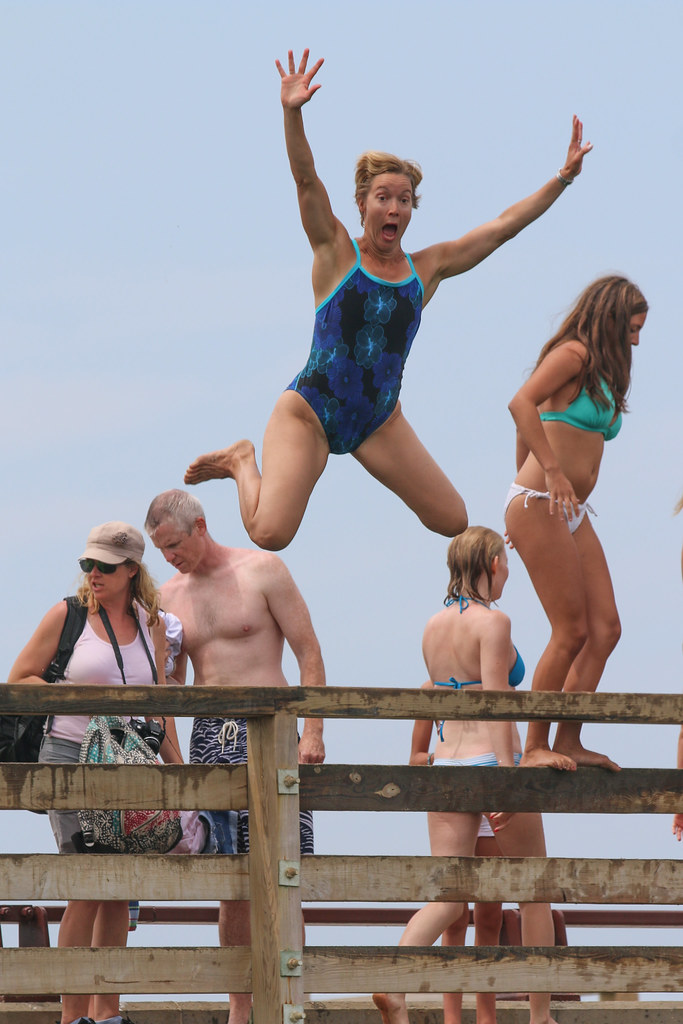 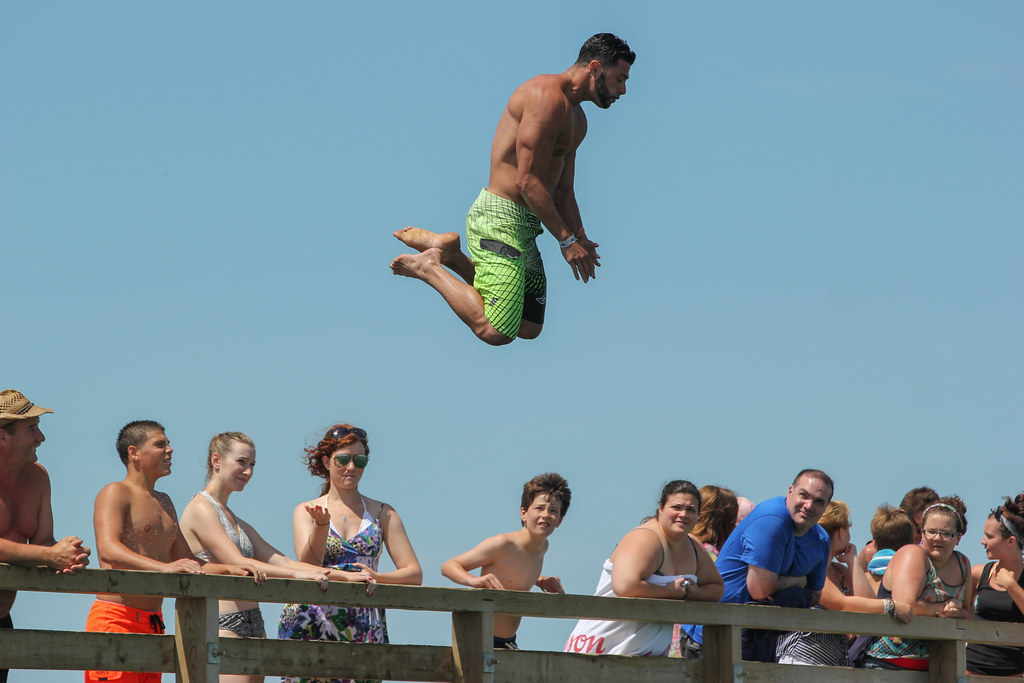 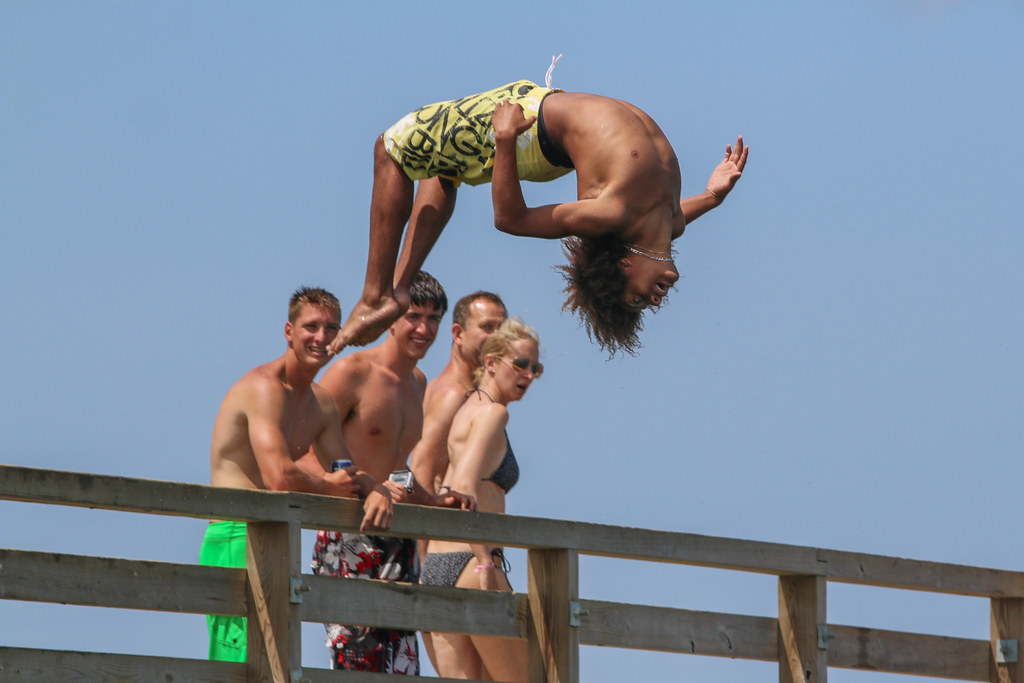 To the right of the bridge provides an interesting, and low risk, vantage point. There’s ample room to back-up and get a side view of a jump, flip, or fall. It’s easy to get the shot with the entire jumper in view so this is the ideal spot to get that nearly-certain shot of the gymnastic vacationer.

Standing parallel to the bridge’s wooden rail allows the photographer to capture a large section of the bridge in the frame giving the photo extra depth alongside the spectacle of the jump. A viewing deck sits across from this view of the bridge and houses additional perpendicular viewers that serve as a back-drop option that’s more interesting than the flawless, yet boring, blue sky. It is possible to get slightly below the bridge from this angle allowing for some crooked angles and from-sort-of-below shots. 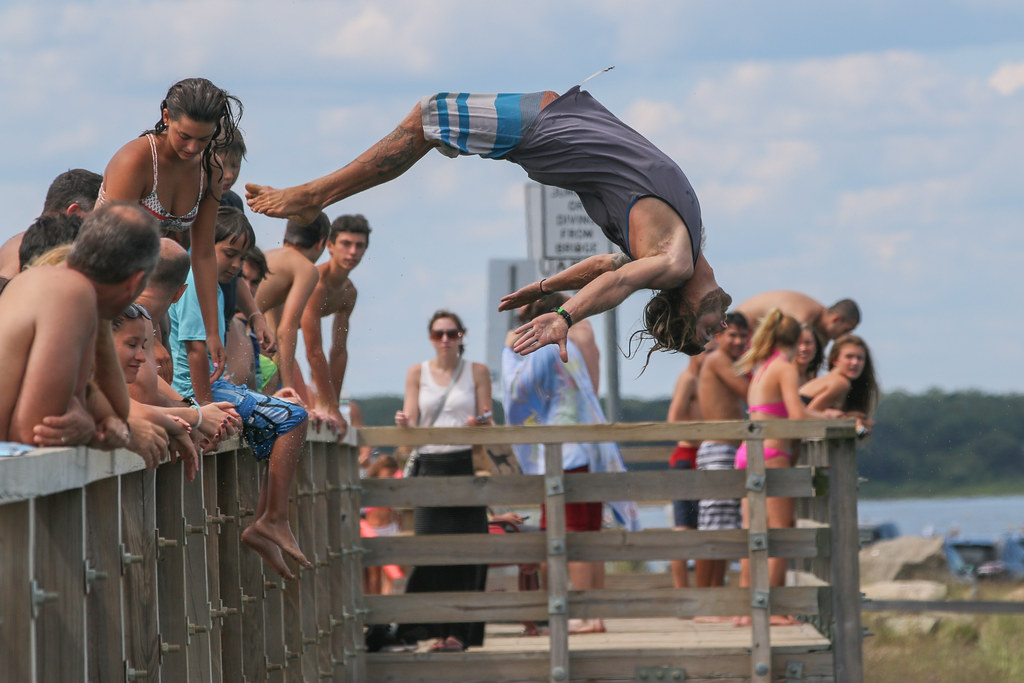 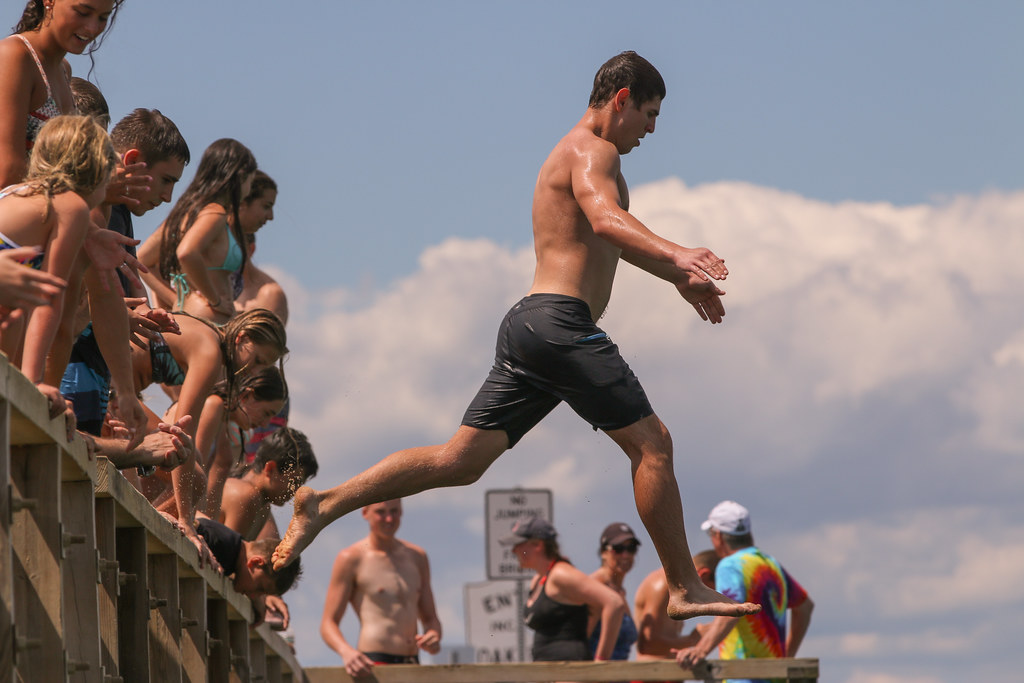 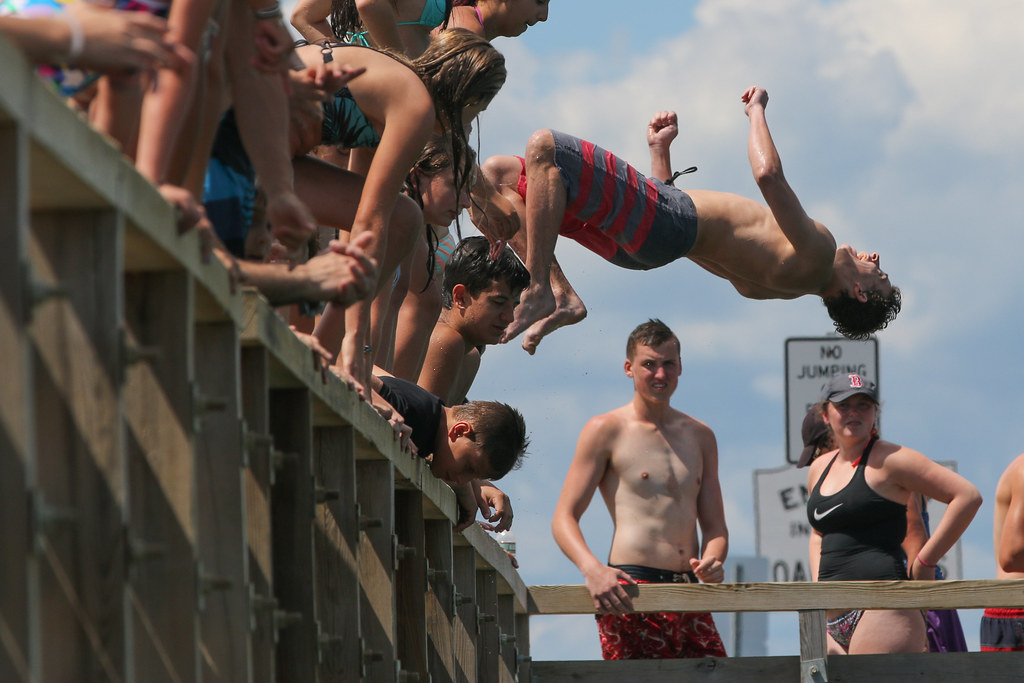 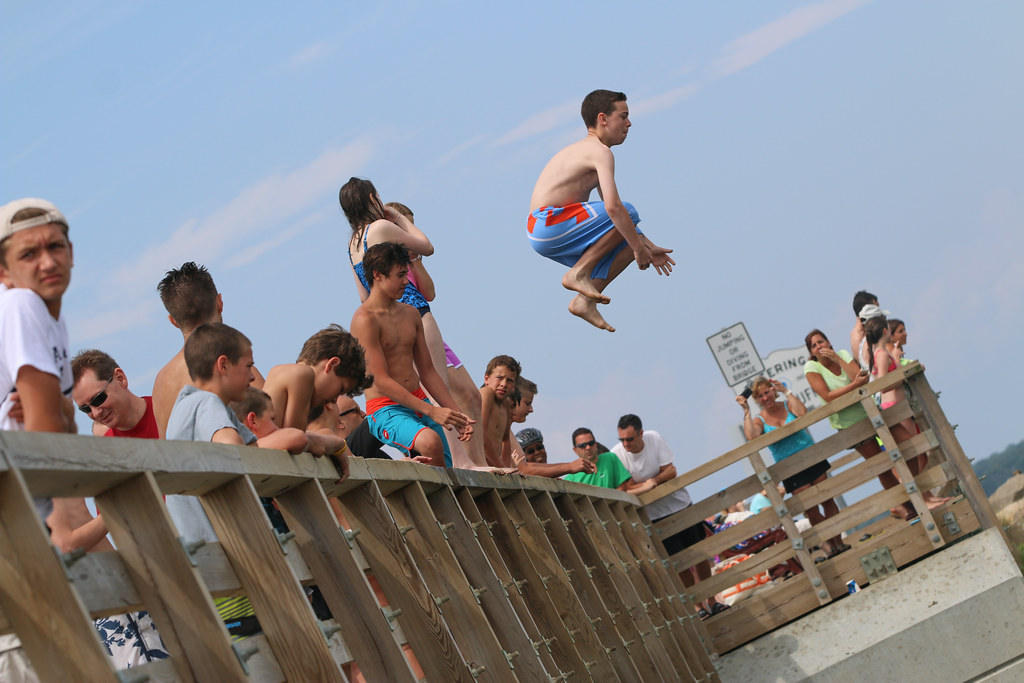 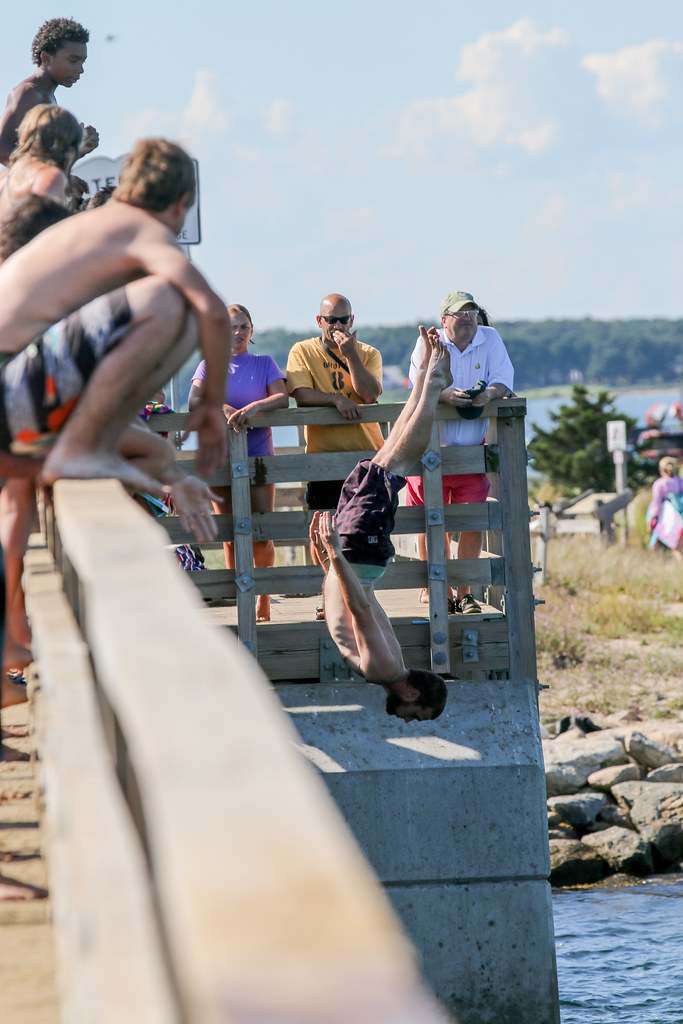 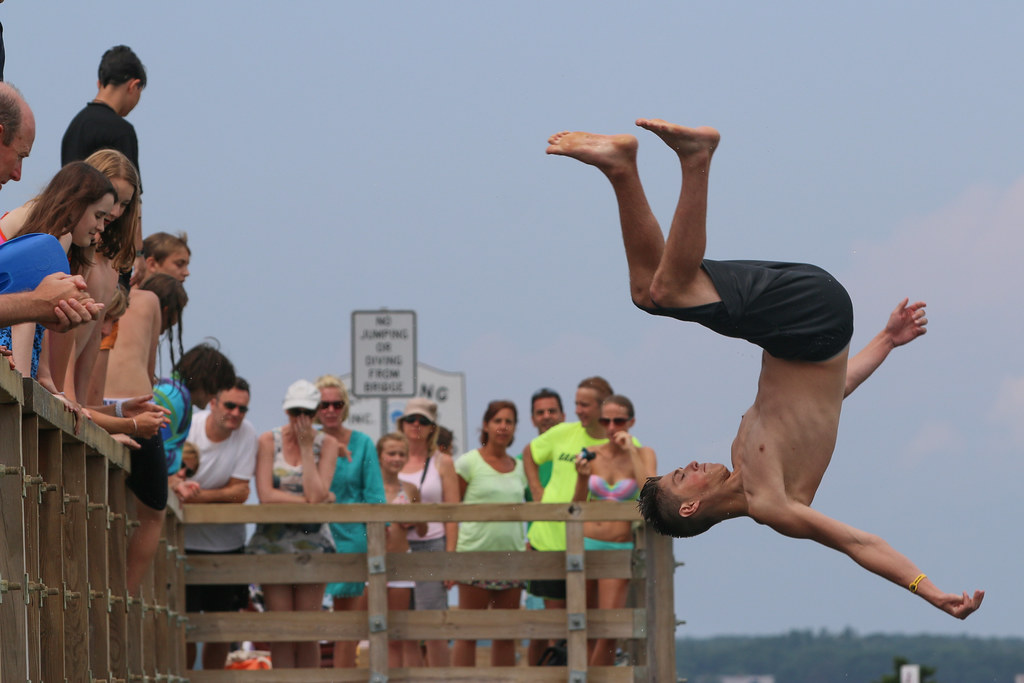 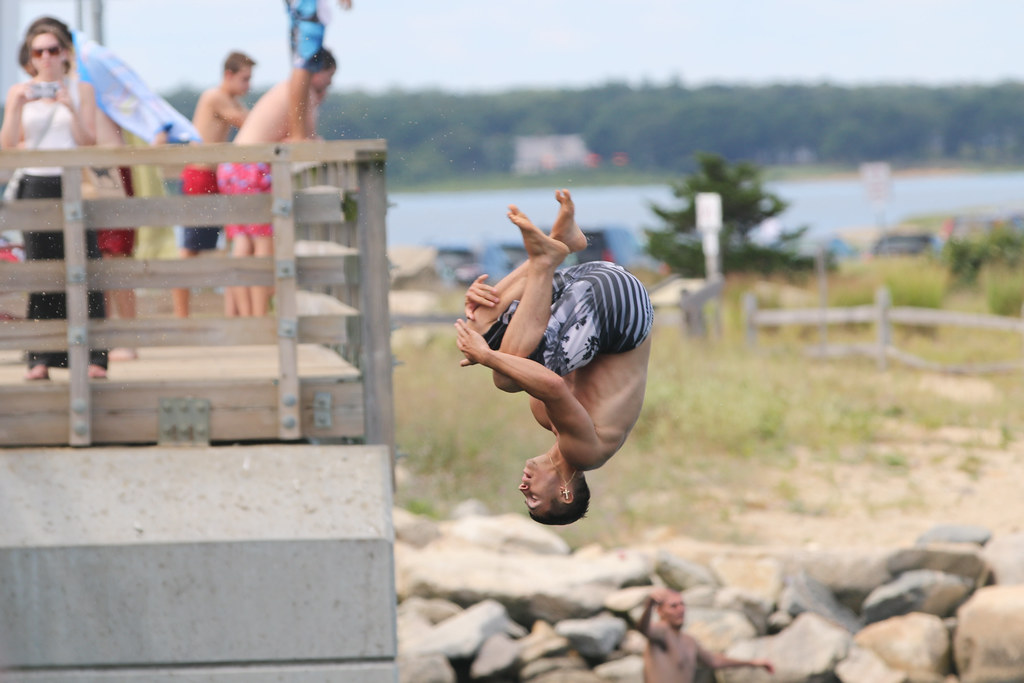 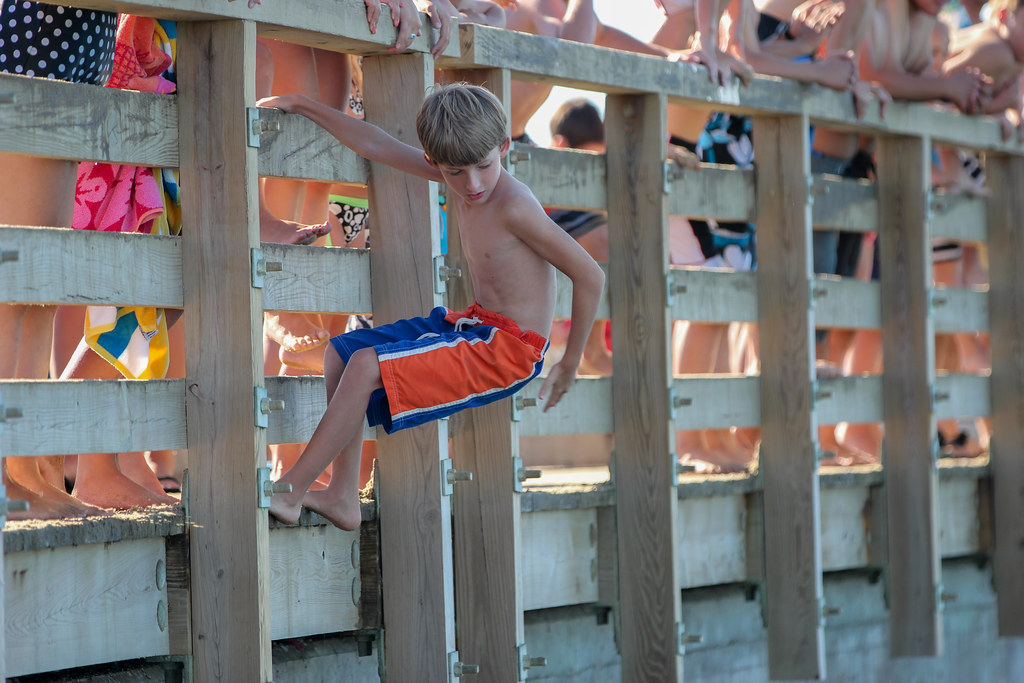 The small wooden deck seen in the Bridge-Right section becomes the vantage point for this section, bridge-left. There is no room to move. To back up means having the railing in the way. To move forward means failing into the ocean. To move sideways means bumping into another spectator. But it’s truly the best view. The railing can still be view, but the fact that the terrain slopes slightly down from this point means the shot also captures both lanes of the highway. An un-cropped photo of the full body of a jumper from bridge-left is the most desirable Jaw’s bridge shot. 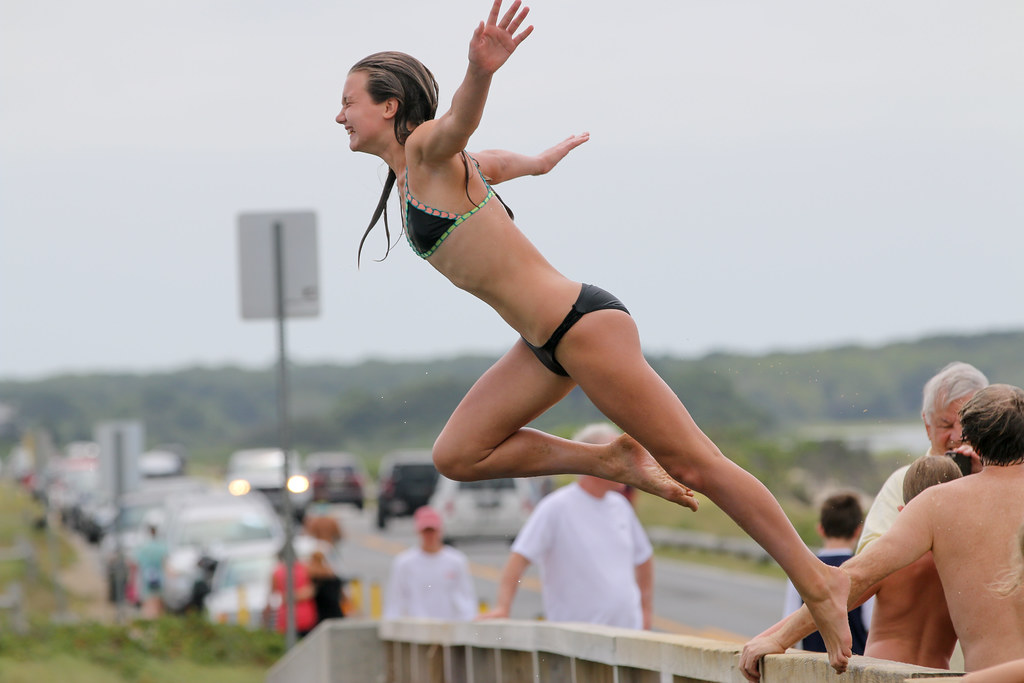 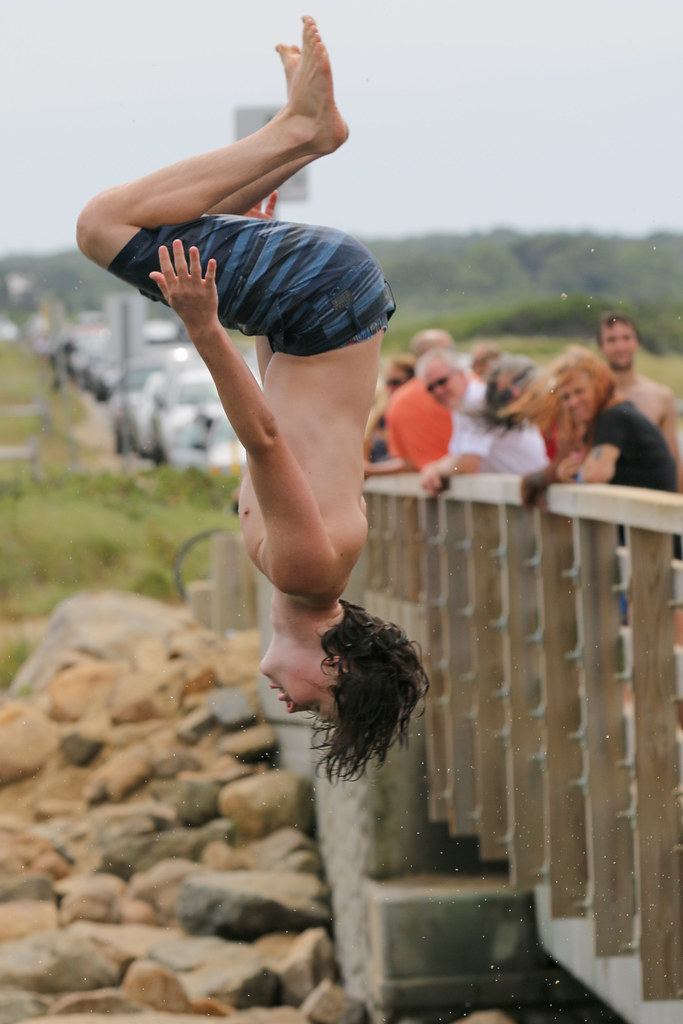 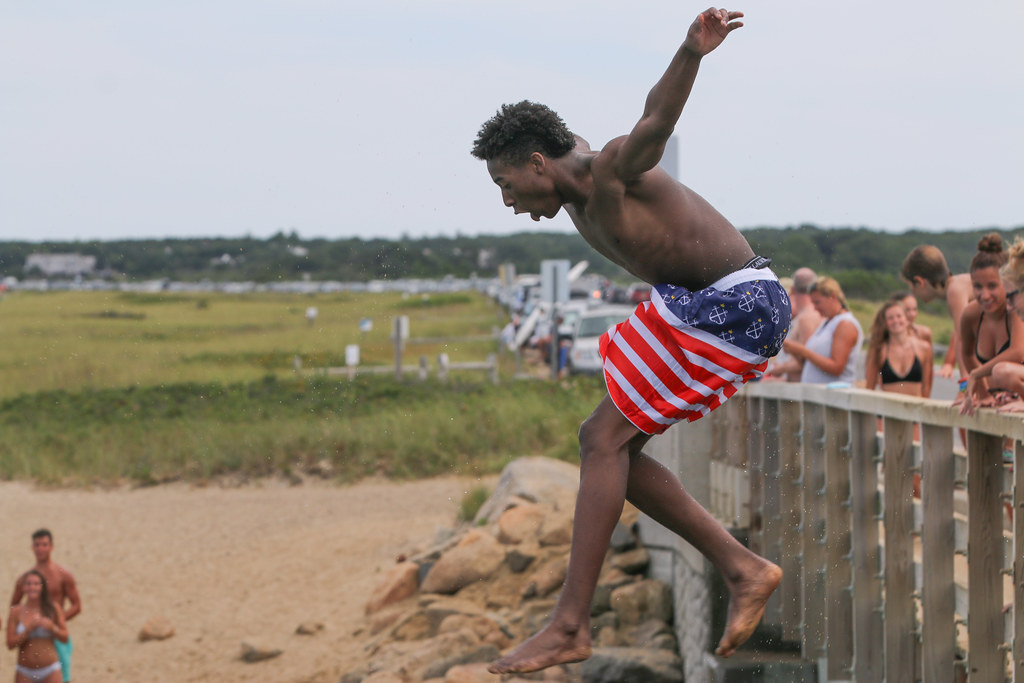 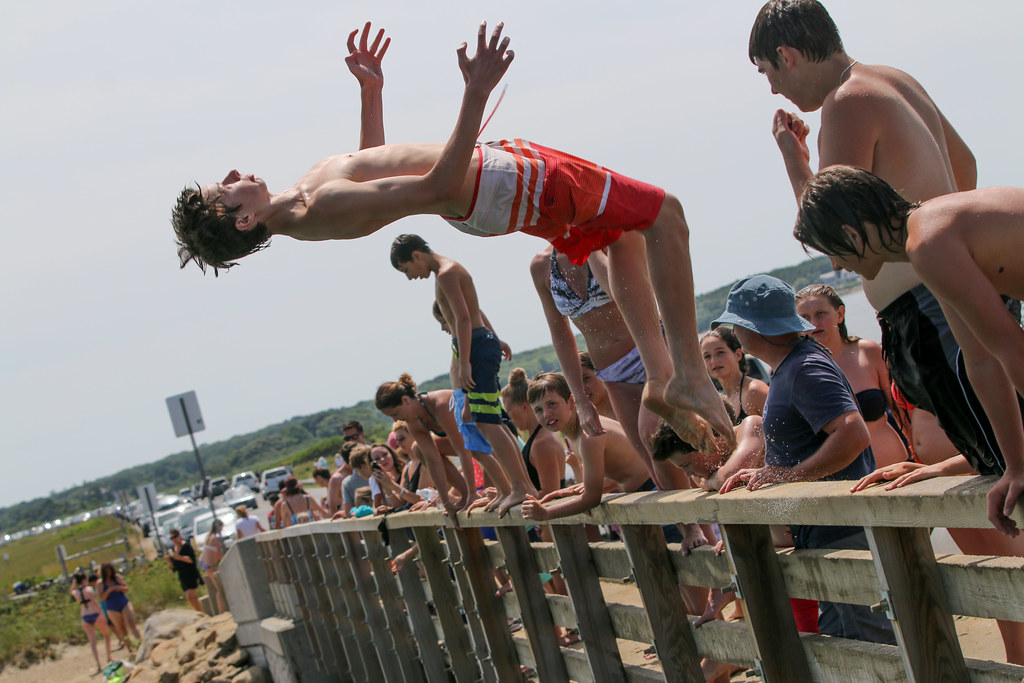 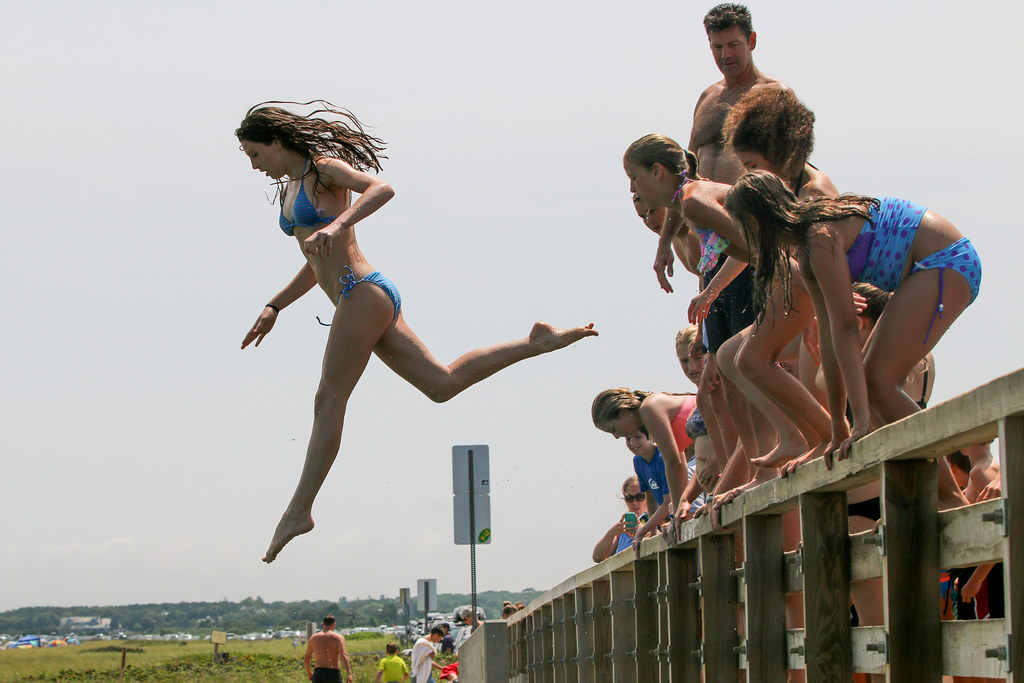 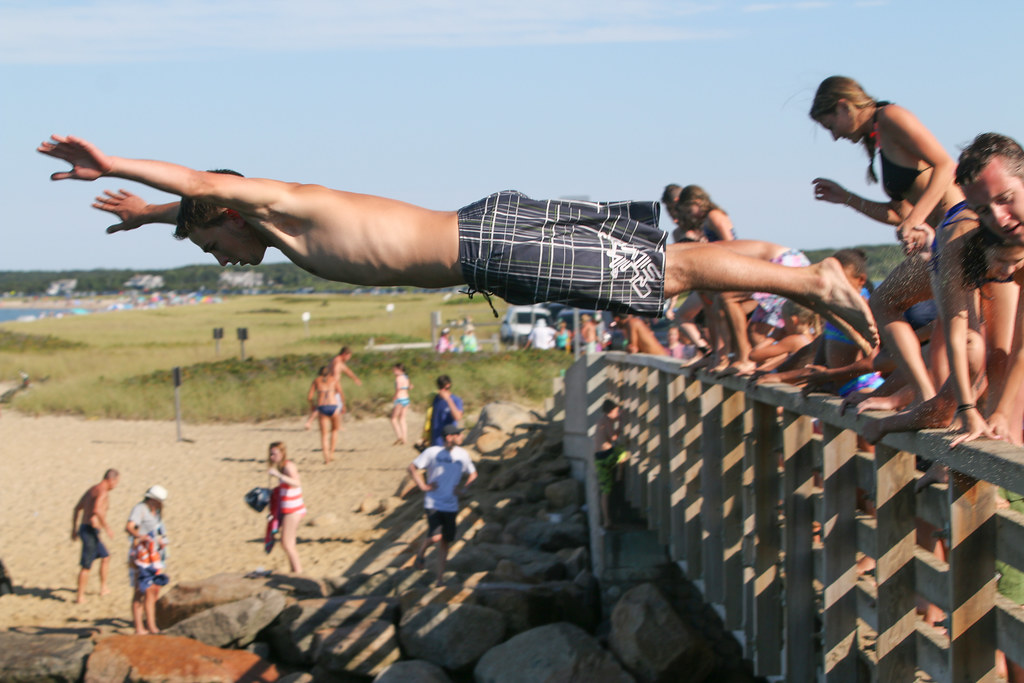 Due to the close nature of this position it’s forgivable, and arguably artistic, to capture only a piece of the jumper. 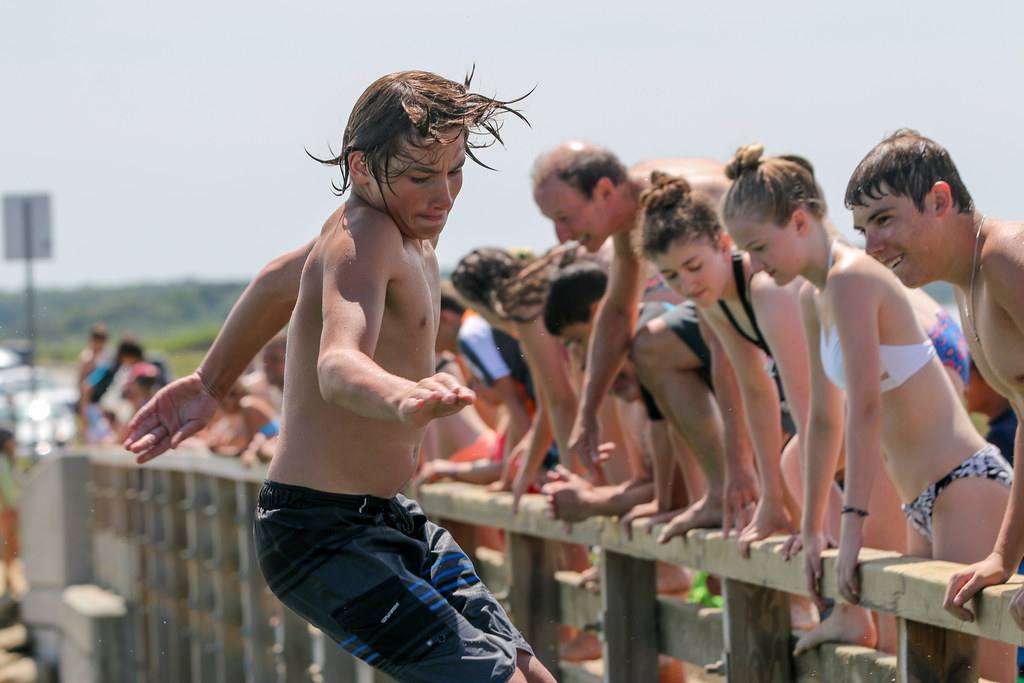 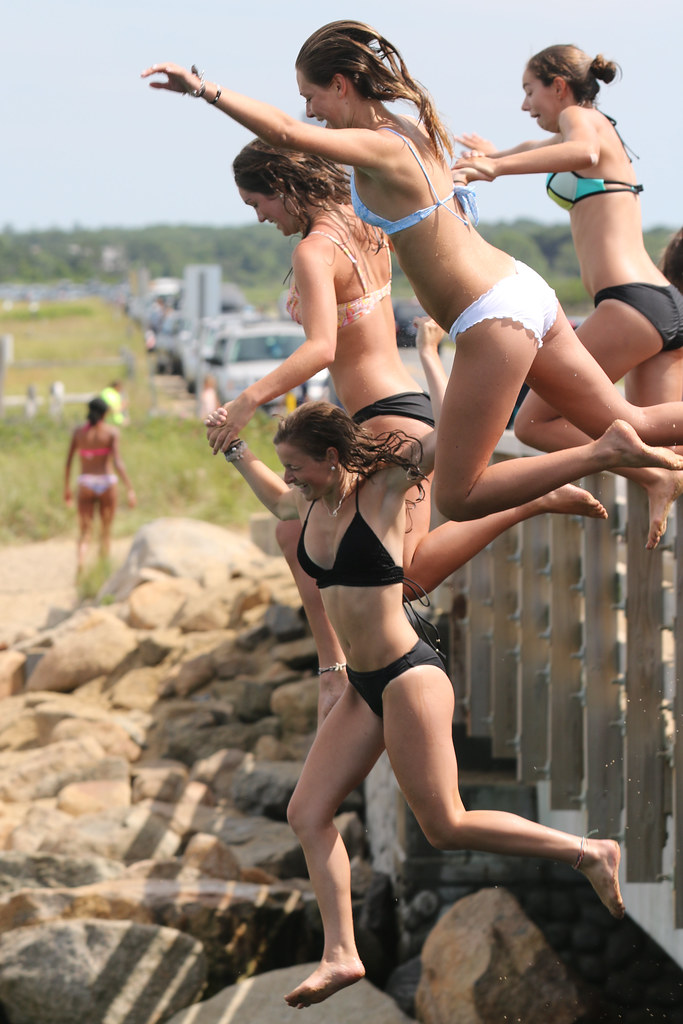 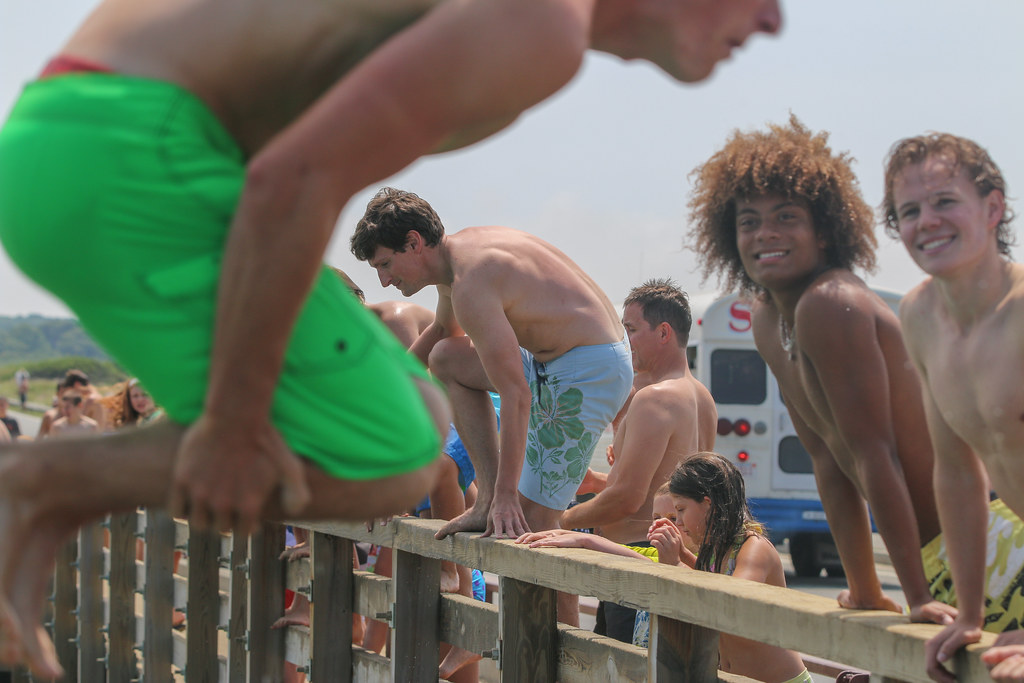 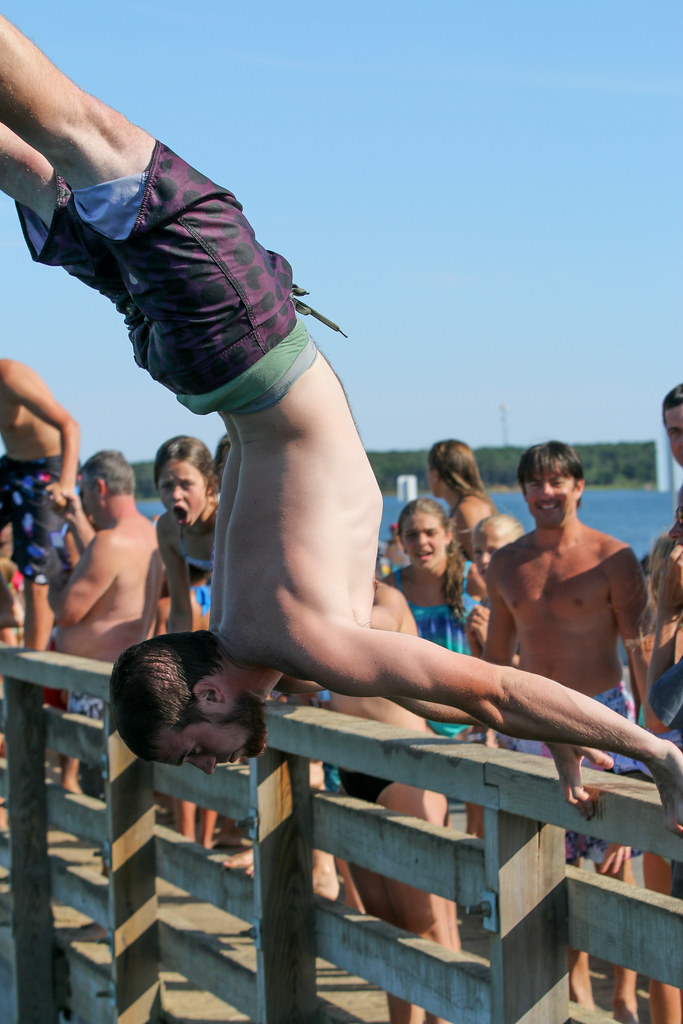 Go to any civic center in a large city and there will certainly be a group of skateboarding youths. Grab a sandwich and sit on one of the benches that they aren’t skating on. No, not that one, that one smells like pee. Just stand. They will try and do tricks, like the one where they jump off something and the skateboard spins around, and they land on the skateboard and skate away. It won’t happen. When and if it does they will pack up their stuff and finally get a job at that sandwich place you just visited like their mom has been on their case about for years.

More athletically prone groups of jumpers will often bring balls or other play toys to the bridge in the hopes that their friend will throw it and they’ll catch it in mid-air. Just like the skateboarder, the trick won’t be successful but that doesn’t change the photographic opportunity. As long as the ball or disk appears in the frame, and there seems to be the intent to catch it, the photograph will portray the desired sporty look. 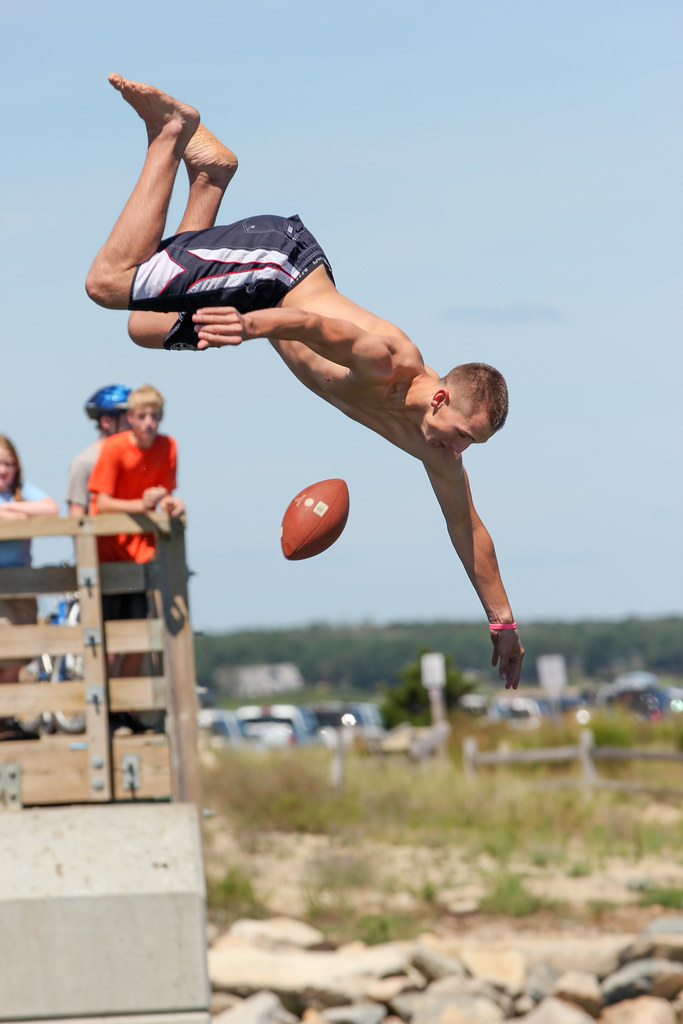 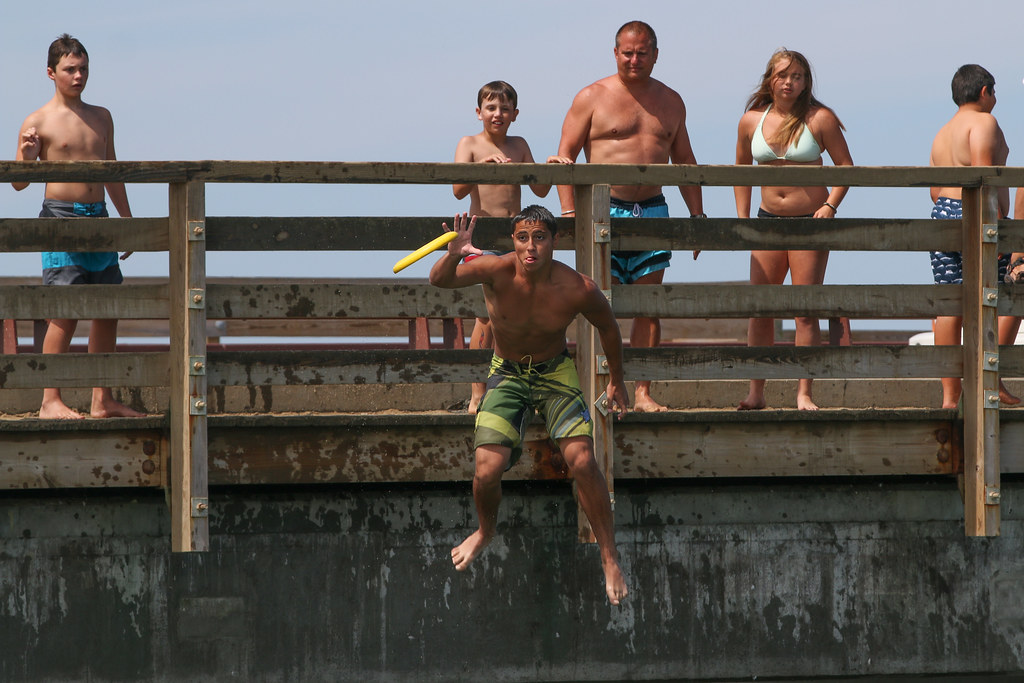 Disclaimer: The information contained in this website is for general information purposes only. This site does not condone jumping from a bridge, or any type of roughhousing for that matter. It’s probably dangerous, I guess. Some people did die near this bridge, in a fictional movie from the 70s. 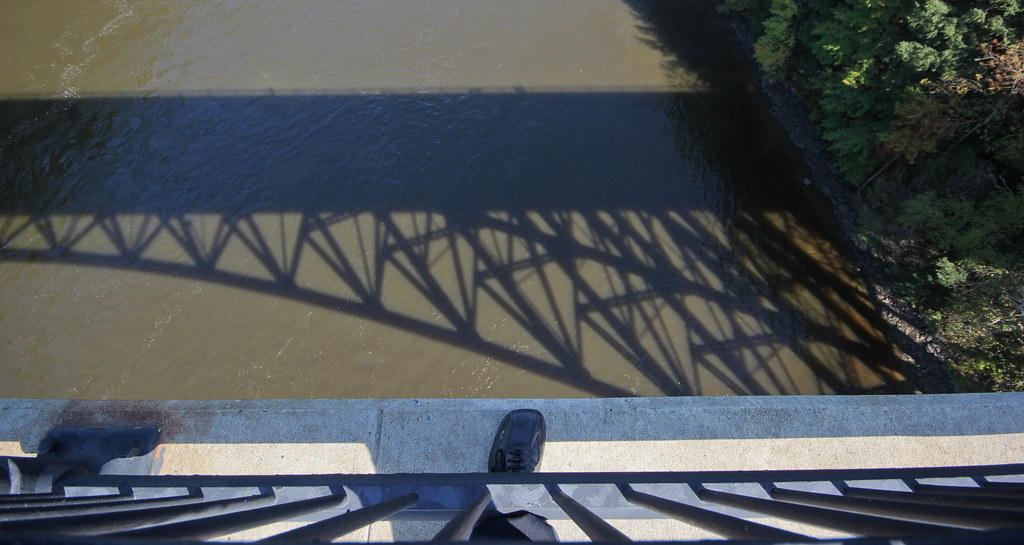