When a band tours on their greatest hits material my desire to see them for a second time decreases significantly. Def Leppard provided the soundtrack to my Middle School carnival days, when I’d look over my shoulder suspiciously as I attempted to win a Samantha Fox poster by throwing a dart at it. I’ve seen them once and that checkbox is checked. I don’t feel the need to see them again. Guns N’ Roses and Metallica were my introduction to the metal genre but I would only pay $150 to see them again if they were playing a small club in LA, and in 1986. 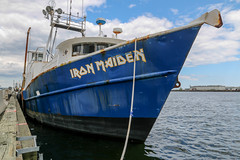 There are only a handful of rock and metal bands that I would continue to go see live year-after-year. Rush and Iron Maiden stand-out as bands that I’d (virtually) line-up for whenever they’re announced to be within driving distance of me. The difference is that these bands continue to put out new music that their audience actually cares about. Each tour is unique and the fan base doesn’t buy a seat to the show with an expectation of what the set-list will look like. Dream Theater fits into this latter category as well.

Dream Theater played the Orpheum in Boston on April 19th, and while I purchased my 2 tickets within seconds of them going on sale, I promptly walked up 2 flights of stairs to my seats in the upper balcony. Something seems rigged when buying tickets online, but that’s not a fight I’m going to win.

I knew what I was getting into when I purchased the tickets; Dream Theater would play their entire album “The Astonishing“, and nothing else. I was fine with this. After listening to the album a few times it quickly became apparent that this was my favorite Dream Theater album since Six Degrees of Inner Turbulence. After many more listens this opinion is unchanged and I continue to find new and interesting things in the album.

I learned even more about the tour from their interview on the Eddie Trunk podcast. When John Petrucci was asked about the possibility of playing some older fan favorites he compared their tour to seeing a new opera by Georges Bizet. After seeing the new opera the audience wouldn’t expect the cast to return and perform highlights from Carmen. While true, the comparison is unfair of course. They aren’t the first band to perform a concept album in its entirety, and the huge difference between Dream Theater and the Opera is that the audience does expect a few fan favorites. Conceited? Probably. But if you have no patience for narcissism you probably don’t like Dream Theater in the first place. I had no problem with the setlist, but would have been disappointed had it been my first Dream Theater show, or if I hadn’t previously read about the tour.

Dream Theater has always strictly enforced a no photography/cellphone policy. I have thousands of pictures online from years of concerts, and not one picture where you can make out the face of a Dream Theater member. This show kicked up this enforcement to the point where audience members were asked to pocket their phones even during intermission. I took this photo before the show started and was promptly punched in the face in 15/16 time by John Myung. While I can respect the cellphone policy during the show it seems a bit much to enforce it at all times in the theater.

The show started promptly at 7:30, which seemed fitting for their theater/stage theme. You could see Mike Mangini ducking below his drum kit, hidden only from the orchestra seats, and not the balcony seats with the top-down view. When the band came on in full force I immediately took out my earplugs. This is usually an indication of good sound production at a live show. Everything was crisp and not loud enough to distort or cause further ringing. I’ve been responsible with earplugs for my years of rock concerts so I feel I can safely tell when they’re not required. Either that or I’ve damaged the part of my skull that makes good decisions about ear protection.

The hard opening of “A Better Life” was the first part that gave me chills. James LaBrie’s vocals were perfect in this aggressive mid-range register, and overall his performance was better than I expected. He has always tended to Vince-Neil (aka mumble) his way through his higher passages, and this show was no exception. Only rarely did his voice crack, though he was quick to recover by lowering the note a bit.

John Myung, Petrucci, and Jordan Rudess were so intently focused on their own playing that it can be seen as apathy or boredom. I think it just takes so much concentration to play that many notes at once that there’s no brain-power left to smile. Mike Mangini had the confidence and skill to also appear to be having fun. He was by far the most animated and entertaining to watch and his drum kit was uniquely set up to accommodate this. The cymbals required a higher-than-normal reach which encouraged Mangini to strike them from the bottom and the top at random. It wasn’t subtle when he showed off his one-handed snare roll. I’m not a drummer, but he made something that sounds impossible look trivial.

I expected an impressive stage show with video and lighting and the flashy lights didn’t disappoint. The video wasn’t exactly what I expected though. I’ve read the general outline of the story that The Astonishing tells. It’s not something I would have picked-up from the music alone, but I expected the video to essentially tell the story as the performance went along so that someone unfamiliar with the story could pick it up from this performance alone. This certainly wasn’t the case. The videos were more of an aid to a story being told through lyrics-only, and as mentioned above, a mumble at the higher registers. The PS2-style graphics reminded me of advertisements for freemium mobile games like Clash of Kings or Mobile Strike, where the ads look nothing like actual game-play.

Because they were playing only The Astonishing I was confident there would be no encore and was happy with that. All an encore is these days is a shorter break between the final songs; but it’s expected and officially concludes a concert. I was hoping that Dream Theater would break this mold and skip the encore since the setlist was so well known to most everyone, but they didn’t.

Their 1999 masterpiece “Metropolis Pt. 2: Scenes from a Memory” was another concept album of theirs that begged to be played in its entirety. The album concluded with the chilling line “We’ll meet again my friend. Someday soon” from the epic song “Finally Free”. What The Astonishing lacks is a comparable epic finish. The song “My New World” is a great rock song with a great riff that signifies the end of the album, but there’s one more song… “Astonishing”. It’s as if they needed just one more song to wrap up the story and had no more music to use.

After Dream Theater finished “My New World” they said their goodbyes and the lights went dark. Most of the audience knew they had one more song to get through, but I’m sure there were fans in the audience who assumed they’d come back and play Pull Me Under. That only set those fans up for disappointment. If they had concerns about signifying the end of the show I’d suggest turning the lights on and playing house music. Or send those NOMACS into the audience to shoot at people until they leave, or die.