I visited my grandfather in late February of 2016 in Springfield, MA. He was 93 years old, and while a part of me thought he’d still outlive me, I knew this was the last time I would see him. During this final visit he was surprisingly lucid. After I reminded him who I was, and how I fit into the family tree, he jumped into stories about the war and the logistics and reasoning behind moving the family. The visual aid of pictures on an iPad helped. 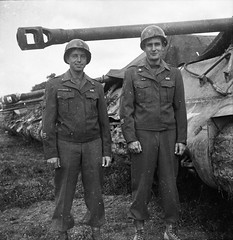 Thoughts of my grandfather fall into 4 separate categories: the old-man who can barely walk, the old man that appeared on holidays with gifts of various usefulness, the young(er) husband and father that moved around a lot, and the soldier. The last 2 categories were delivered to me in the form of old photos and accompanying stories based on my increasing curiosity. The thoughts of him as a soldier are the most astonishing and served as the inspiration for the song I wrote following this final visit.

I wrote the themes the night I returned with the idea that I’d play the music at the funeral. What music is appropriate for a funeral? That question never crossed my mind. I wrote a lullaby for my two daughter’s, Carmela and Valentina, and there’s no way that either piece of music would be categorized as a lullaby on their own. No one would ever be critical to this definition since the intent was in the right place, and I’m not exactly asking for money or approval. This is even more so for original music played at a funeral of a family member. I could have smashed my head on the keys for 90 seconds and I would have received the same feedback as I did for my actual piece and performance. The intent is more important than the quality or appropriateness of the composition.

It’s easy to say that a piece of music was inspired by an event after the piece was written for the sake of convenience, and it’s unlikely that someone would ever question it. But in this case the music was completely new to me with visions of his WWII heroics fresh on my mind as I wrote it. I wanted it epic and old-timey at the same time, just like the real WWII. At this point I assumed the funeral would be in a week or so, which didn’t give me a lot of time.

With the themes in mind I wanted to find an appropriate title, and possibly incorporate some actual WWII music into the song. I scoured the 101 Songs that Won World War II list and the song “Somewhere in France with You” (SIFWY) by Joe Loss & His Band caught my eye. The song itself is somewhat forgettable but it grew on me. My piece was thus far in 4/4 time while the Joe Loss tune was a waltz in 3/4. It’s hard to say if the song really inspired my piece, but it did cause me to add a section of 3/4 in the middle, only to return to the theme in 4/4 at the end, and then move back to 3/4 to tag my song with the actual “Somewhere in France with Me”.

But Grandpa didn’t spend much time in France, as far as I knew. There’s this picture he took in the Palace of Versailles, but the title of “Somewhere in France…” implies a bit of mystery regarding the location. Google Maps can tell me exactly where he was in France around 1945. So many of his stories and pictures come from Czechoslovakia, hence my clever title change of forcing a 6 syllable word where a 1 syllable word once was; “Somewhere in Czechoslovakia with You” was the official title. The 20 second chorus taken from SIFWY at the end of my song concludes (unsurprisingly) with the lyric “Somewhere in France with You” and I made it clear that I’ve changed the title by playing the note 6 times where a single note makes far more sense. I’d like to think that the audience was in on the bit with me and it was obvious to everyone why I stuttered the note 6 times. Even if the song wasn’t beyond obscure today it’s a long-shot. In reality it’s an inside joke between me and my memory of my grandfather’s WWII days.

I wanted to record the song to preserve it in my catalog. I have the tendency to quickly forget songs I’ve written if not played often. I first attempted to record the song about 2 weeks after it was written as I had the equipment out to record songs for my annual best-of project, but it wasn’t successful after about 6 tries. Normally I’m not a perfectionist when it comes to piano recordings, or live performances. I can quickly recover from mistakes but I wrote this song a specific way, and for better or for worse, I wanted the recording to match the version in my head. I tried it record it again about a week before he actually died and I was again unsuccessful.

This is where I began thinking of the song’s fate. It was meant to be heard at my grandfather’s funeral, not by YouTube or anyone else, yet. I even thought that grandpa would like to hear the song as he lived several more weeks than expected, but I decided against it. It was meant for his funeral. I jokingly thought that a force greater than my piano playing was making it impossible to record it and after the second failed attempt I gave up trying until after his then-unscheduled and then-unnecessary funeral. As I had these thoughts of fate I did reflect on the arrogance surrounding the situation. I was using the stage of a funeral to premier a piece of mediocre music that I self-described as having a “fate”. I asked Reddit for their thoughts, and it was concluded that my intentions were in the right place.

My grandfather died on April 15th at around 4:15AM. I had woken at around 4AM and couldn’t fall back to sleep and ended up going downstairs and watching the re-make of National Lampoon’s Vacation. My dad called me with the news at around 7AM, when he thought I should have been waking up, not realizing that I’d already watched a full length movie. Something woke me up at 4AM that wasn’t a 4 year old. It’s wasn’t the death of my grandfather either, that’s nonsensical, but it’s an interesting coincidence.

Last night I sat down to record the song, again because I had the equipment out working on another project. In the Hollywood version of this story I would have played it brilliantly on my first attempt after the funeral. A 22-year old hologram of Grandpa would float down in his army uniform and shake my hand and tell my it was all worth it. But no, the first attempt wasn’t successful, but the second play-through was acceptable. It’s still an interesting story. Here’s the video from the second playing, post-funeral, premier:

The video is now destined for its second fate; to receive 100 views in 3 years and earn $.30 via Google Ads.