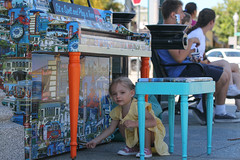 2017 conceptually matches my 2016 concept for this project. It’s 30 albums that were important to me, and also inspired a quick piano cover. To say that I continue this project for me sounds cliche, but it’s ultimately the truth. It inspires me to learn new songs on the piano while bringing new meaning to the albums that I find interesting each year. They aren’t necessarily my  favorite albums.

As usual, songs are played too fast, and with apparent nerves. I apologize to no one. It’s this or nothing.

1) Come From Away Soundtrack

I enjoy the soundtrack to new musicals for the music. It’s often not until I see the show that I truly understand the plot and the meaning behind some to the lyrics that have been stuck in my head.

Come From Away had a simple, heart-warming storyline. The music seemed simple and very approachable after the first listen. I was surprised by how much I liked this one in the end. Unlike most musically, I feel like I followed the plot from the beginning by the audio alone. I haven’t seen it yet, so for all I know this musical is really about the US housing crisis, and not the nice people of Nova Scotia housing international travelers after 9/11, as my casual listens imply.

Call me a PFM purist, but I can’t listen to English versions of their songs. I don’t notice lyrics unless they are really bad, and when you translate Italian into English, cheesy lyrics can ruin the experience. Despite the English title (in the US iTunes), Emotional Tattoo is availble in both English and Italian on the same album. I couldn’t listen to more than a few minutes of the English version, but I found myself listening to the Italian version on repeat. It’s classic, synth-heavy prog that stands up with their classic 70s albums.

3) Pain of Salvation “In The Passing Light of Day”

Pain of Salvation is a band that can do no wrong in my book, though I do admit that the Road Salt albums, and Scarsick, weren’t my favorite. Fortunately they return to their Remedy Lane form with their 2017 release. The syncopation on “Reason” would of fit right in on Remedy Lane.

“They don’t write them like this anymore” is something that someone from the class of ’78 may say today if they haven’t heard of Pride of Lions. I imagine they can only play small clubs or festivals today, but they missed their calling as an arena act.

5) Tift Merritt “Stitch of the World”

Tift Merritt comes across as an energetic sweetheart. My wife and I first saw her in 2009 at Merlefest and nicknamed her Pippy. Years later I assumed this was due to her height and red hair. After seeing her again in the much more intimate Club Passims, she was a short firecracker.

This album came out around the time of Trump’s 2017 inauguration. I sat at my piano and played along to her song “My Boat” which was optimistically inclusive and a contradiction to the immigration policies being discussed on the news.

The women’s and science marches of early 2017 sparked some optimism that one man can’t take us all back in time. But by September it was clear that nothing actually mattered any more. While Tift Merritt’s “My Boat” started the year with hesitant optimism, Deer Tick’s “Hope is Big” closed it out with a feeling of defeat. They’re always gonna win.

Vol 1 and Vol 2 were separate albums released at the same, like G’n’R’s Use Your Illusions. But in this case Vol 1 was acoustic and Vol 2 was electric. While they were both great, I would have preferred if the songs were interwoven into one double-legth and dynamically interesting album.

Royal Wood is big in Canada, I think. At least bigger there then in the US. His vocals are comparable to a post-Genesis Peter Gabriel (or as a non-prog fans would say, regular Peter Gabriel), with less experimentation and a more singer-songerwriter vibe. “Deer Anna” seems to play homage to Piano Man-era Billy Joel.

I saw Royal Wood in 2017 in Club Passim on a weeknight, and it was barely attended. I felt bad, but I imagine smaller artists like this are used to it. They need to play as many shows as possible, and it’s better to play to one person on a weeknight then to no one at all. He gave the cliche talk about how he’s happy that even one person showed up. It’s an artist’s way of telling an audience they don’t have to feel bad for them.

8) The Infamous Stringdusters “Law of Gravity”

I put The Infamous Stringdusters and The Steep Canyon Rangers in the same category. They lead the new wave of bluegrass, while being very approachable to any age group. They also release consistently okay albums. They don’t take a lot of risks, but they won’t let the listener down. This is one of those albums, and both bands shine best live.

2017 was a good year for Broadway Musical Soundtracks, and Dear Evan Hansen was likely my favorite. There’s influences of Rent and Next to Normal, but overall it plays as a good album, which is exactly what I’m looking for in a Broadway soundtrack. I haven’t seen it yet, but the audio alone is powerful and emotional enough.

“Requiem” was the stand-out ballad and was the one that I knew I wanted to cover. While it sounds somewhat simple at first, its complexities came it its 6/4 time signature. While I tried my best, I do admit that the time signature fooled me at times.

10) Good Harvest “In a Life and Place Like This”

While the “Secret Sisters” subscribed to the Simon & Garfunkel playbook, “Good Harvest” only took notes. They also took notes from “The Civil Wars”, minus the somewhat boring parts. Ultimately they took the best parts of both. Their harmonies weren’t simple, but instead took separate melodies and put them together to create this outstanding debut album.