The New Bedford Summerfest was a staple in my pre-children adventures. It was very cheap (maybe $7/person/day) and the parking was free and convenient. It’s where I discovered The Duhks and The Lovell Sisters. It was a reliable place to get my yearly fill of The Kennedy’s, John Gorka, Jeremy Kittel and Benoit Bourque. There was even a carnival on a pier at one time, and if it wasn’t for this site confirming its existence, I could have been convinced that it was a fever dream.

It was at this festival that I discovered the thrill of concert photography. It allowed me to insert myself into the action, temporarily, while still allowing time for fried scallops. The environment wasn’t great for concert photography, but I didn’t know any better and my standards for my own output wasn’t very high yet. The outdoor tents provided great shade for the audience and pickers, but the lack of light combined with the speed of picking produced a lot of blurry shots.

The last year that I attended was in 2012, which meant I did bring a one-year old to the fest. At that age kids are still luggage that need to be fed. They don’t have much say in what happens next. It was this year where the big tent came down and the main stage moved to an indoor theater. It wasn’t the choice of the festival. The town took over the space and built a park. I’m sure it’s a better use of the space when one considers that New Bedford has to function outside of this yearly festival, but I didn’t like the move. A folk festival inside a theater doesn’t feel like a folk festival. It just feels like a long concert.

After a six year hiatus I decided we needed to revisit this festival, now rebranded the New Bedford Folk Festival. I knew this year would be different. The main stage was still indoors, and my kids had developed their own opinions and preferences (and still would need to be fed).

Parking was $18, which was my re-introduction to the festival. I told the lady that handed us the ticket that it used to be free. She said she knew that, and it was clear she didn’t want to talk about it. She was likely stationed at the otherwise automated ticket machine to confirm to out-of-towners that the parking would no longer be free. It wasn’t her fault so I wasn’t rude. Or maybe it was her fault. I dunno.

The tickets were now $30/person/day, which was a huge increase from the $7 that my memory said we paid last time. Kids were free, but that thrill only lasted a few minutes. Within the first 30 minutes our kids had spent nearly $50 on face painting, henna tattoos and fun dress-up clothes. To them, this is what summer festivals are all about. 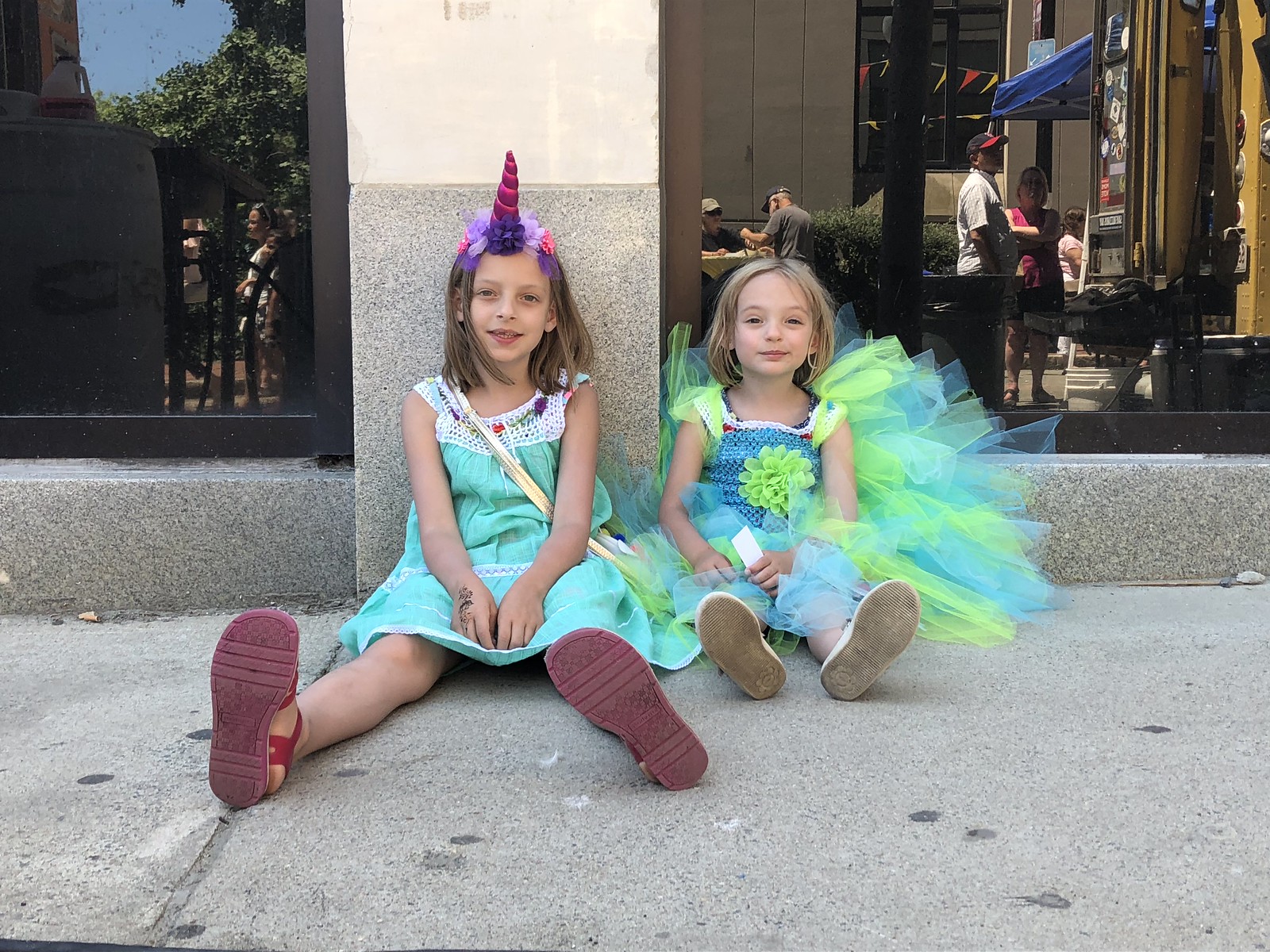 With the new festive outfits we explored the changes to what was once a familiar festival. The most noticeable change was the street of the Zeiterion Theater was completely shut down and featured food and beer vendors. There were at least 2 stages on this strip of street which now felt like a stand-alone festival. In previous years we often ate at local sandwich shops, but the addition of so many food trucks made this unnecessary (for better or for worse for the city of New Bedford).

Our kids gained unexpected celebrity status in the early hours of the festival. Their funny outfits awarded them many smiles, laughs, and compliments. For a short time they knew what it was like to be John Gorka or Benoit roaming the streets, just trying to buy their own unicorn/fairy outfits in peace. I made the joke to these fellow festers that “kids were free, except for all the stuff we bought them”. It went well, so I repeated the dad-joke every chance I could get.

But the same people who smiled and laughed at our kid’s energy turned those smiles upside-down when we entered the Zeiterion Theater for John Gorka, one of our favorite pre-kid acts to see. John Gorka brought along only his guitar, which inspired a quiet and intimate set. It did not match well with an energetic 3 and 7 year old, still bouncing with the energy of the friendly street people.

We were sitting towards the back and are kids were fairly well behaved, but not silent. Complete silence was not an option. The older man in front of us was growing in frustration and finally turned around, looked my wife in the eyes, and said “can you please keep your kid quiet?“. We looked at each other in surprise, and before 10 seconds went by, he turned around and repeated the request. His wife gave him a quick whisper of disapproval and he didn’t turn around again. But the situation was now uncomfortable for everyone and we took the kids outside. The main stage of this festival was in no way family friendly, and there’s no easy solution. Outdoor folk is family friendly, but when it’s brought inside it demands quiet, which can’t be demanded upon a 3 year old.

The original main stage area was now unrecognizable, but overall looked nice. The new park was being used by people passing through, as well as music lovers who could sit on the small hills and enjoy the music without the necessary wrist bands. It was likely a good option to put down a blanket and listen to the music without the worry of elder shushers. They had put up a nice, yet smaller, tent in the area of the original main stage. It was the stage that felt most like the festival I remember from 10 years ago. 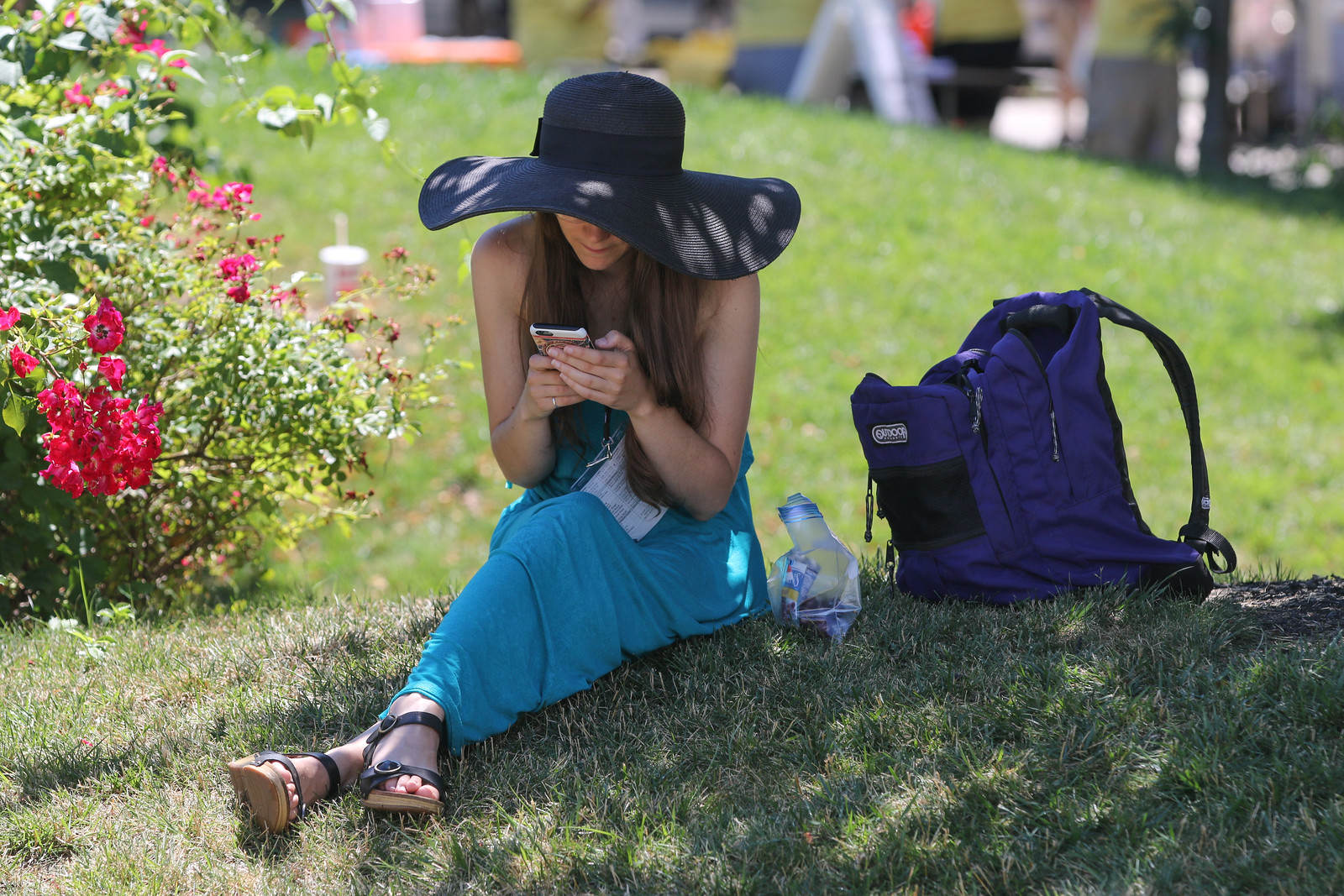 The kids stage was a nice addition, and to be honest, it could have always been there. It’s not something that people without kids tend to notice. It didn’t appear to be well-attended though. We stayed for most of Little Blue Heron and as the show progressed it became clear that most other people in the audience were friends and family of the band. Regardless, it was a good time and a place where the kids felt welcomed. 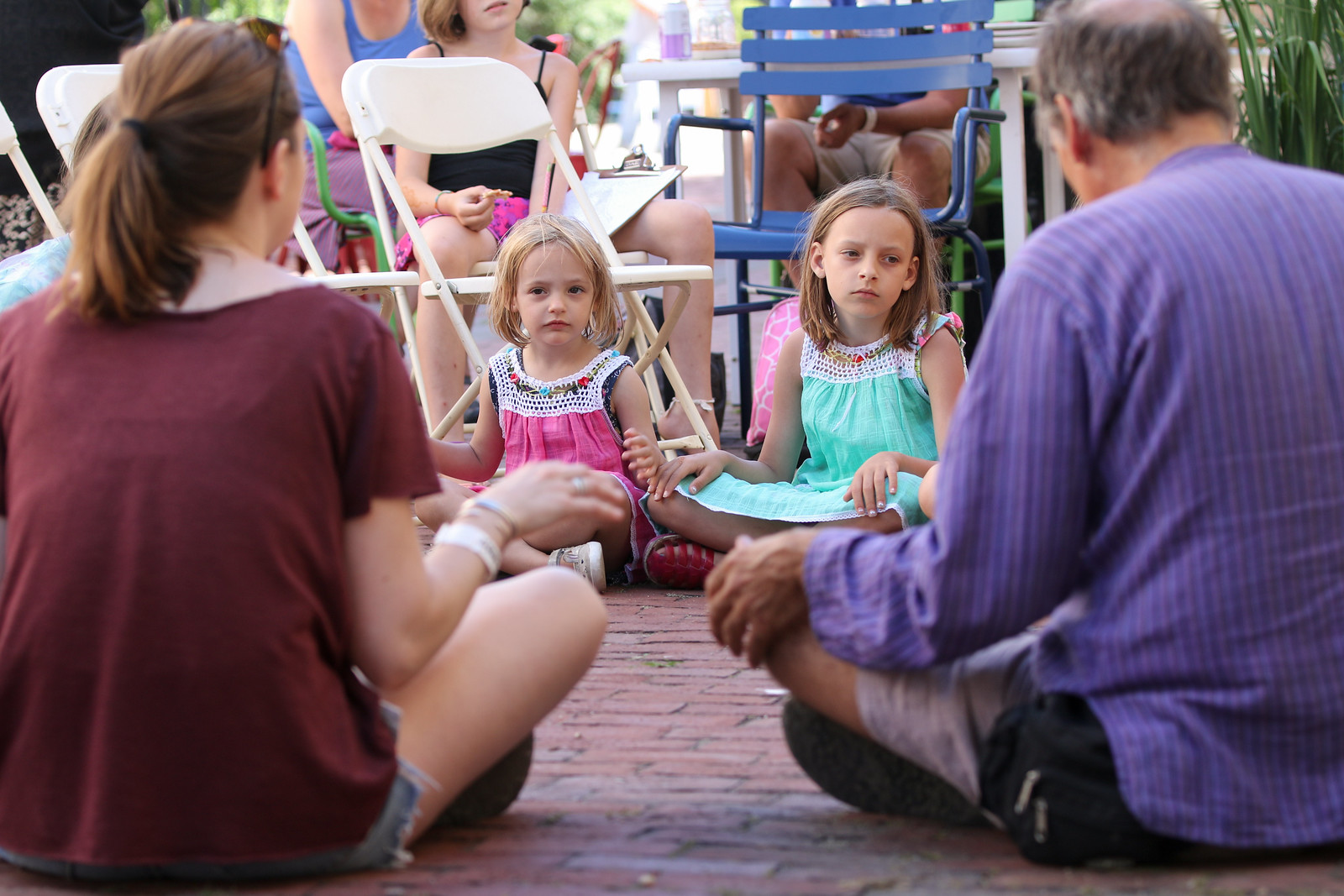 Jeremy Kittel was all grown up. He was a young 20 year old child fiddle prodigy when we first saw him at the festival over 10 years ago. I remember him hanging from the rafters and street polls with his friends, but now he was well into adulthood and those childish acts of rebellion were handed down to my two kids. 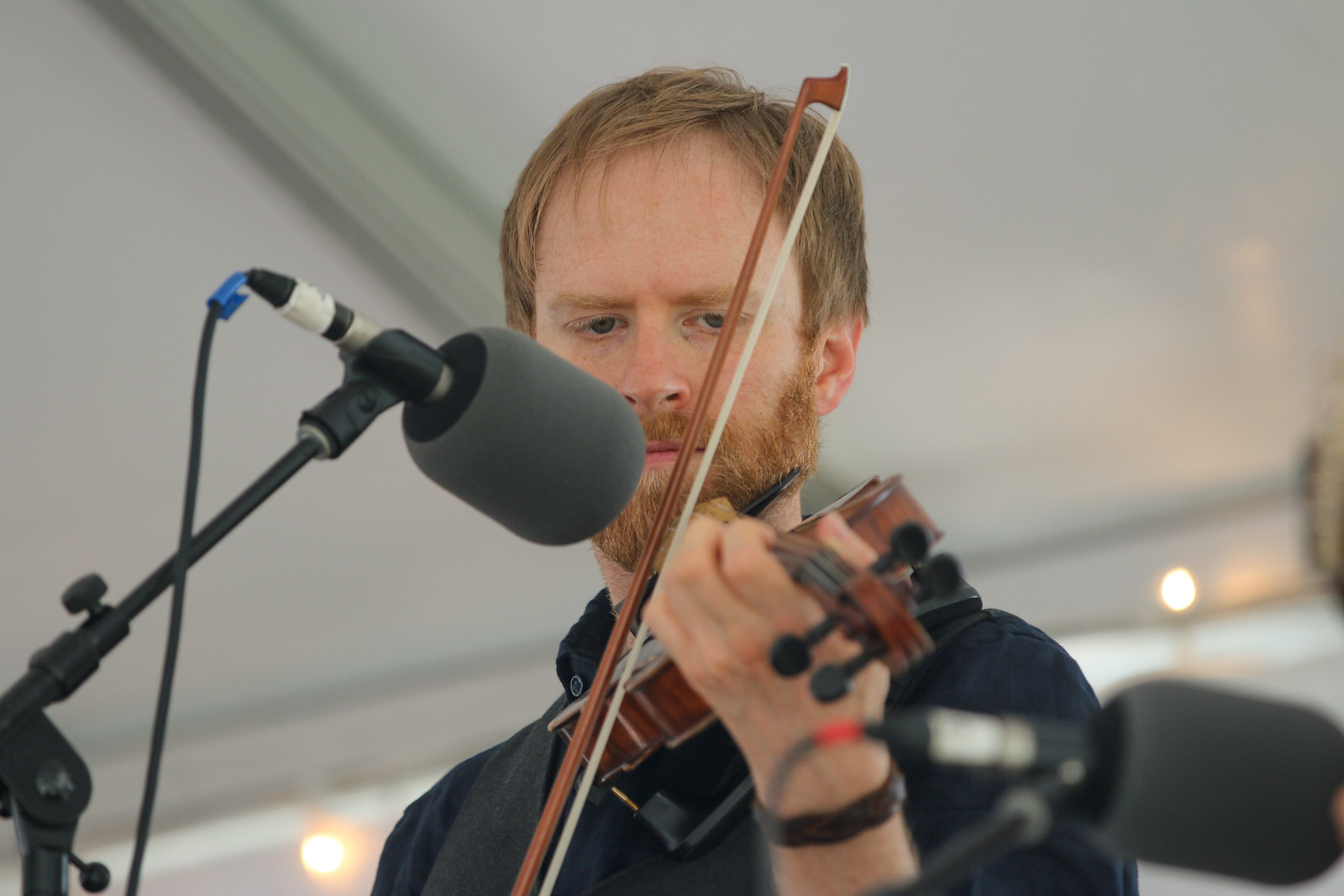 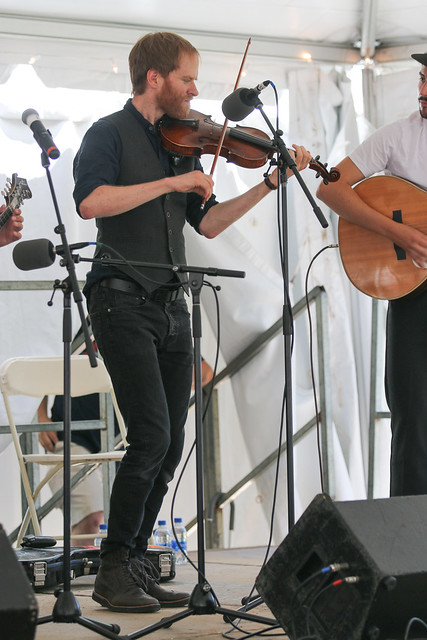 The highlight for my kids came towards the end of the festival at an unexpected place. There was an electrical box decorated like a cute old-fashioned well, complete with a nice wooden roof. The kids decided to open up their own unlicensed stand to sell their old songs and vocal interpretations. I don’t think their audience knew how to respond, and offered only a passing smile, or look of confusion, as they walked by. It’s best explained in pictures. 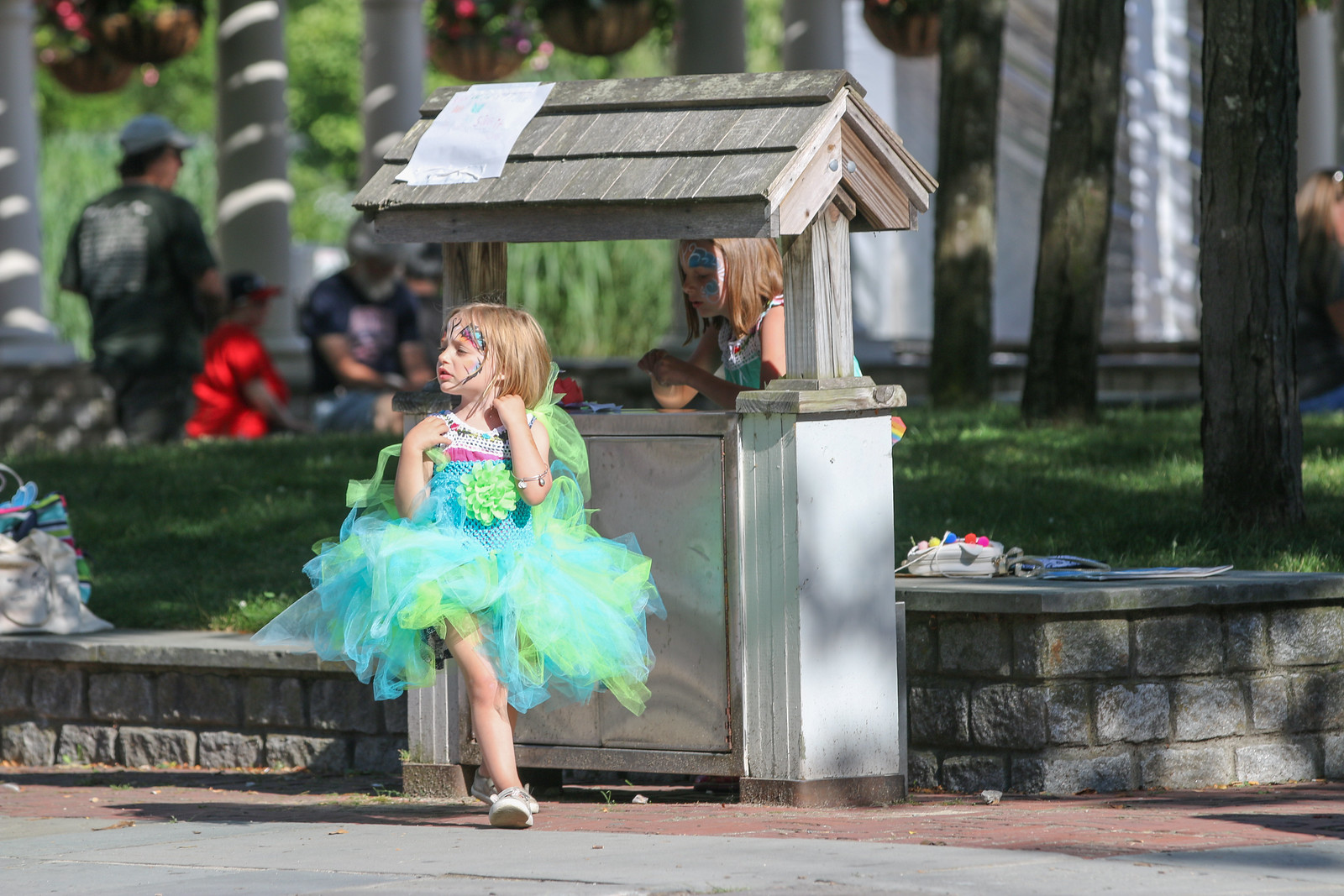 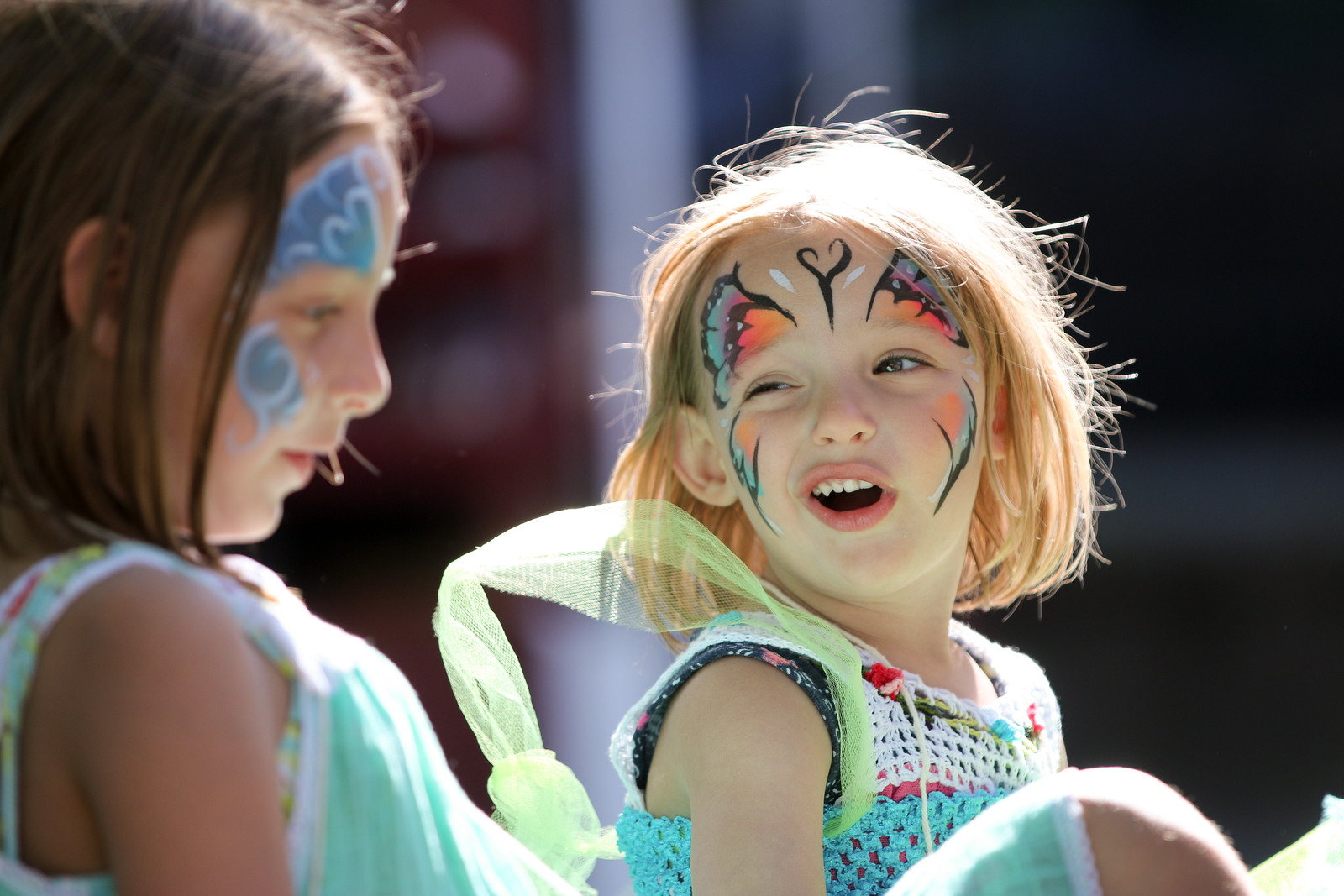 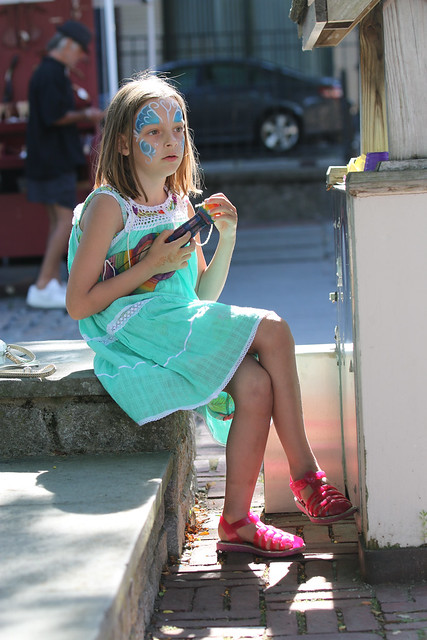 We left the festival at around 5pm. The kid’s song-stand had not been a success, and we had dinner and bedtime to worry about. As we entered the garage there were a few groups of people wearing angry and confused faces. None of the automated ticketing machines were working, and no one appeared to be working there to assist. The signs on the broken machines suggested that we ask an attendant for help, but no one could be found. The garage thought it was a worthy expense to pay someone to sit at the ticketing machine entrance, whose main job seemed to confirm to everyone that, indeed this time, the parking was not free. But no one was on staff to assist people leaving the garage, where help was certainly required.

This wasn’t my first trip to an automated parking garage, so I falsely assumed I could outsmart the confusion and we’d be able to leave without any issue. I was wrong. One can often just drive up to the exit gate and pay for parking there, without the additional stop at a pay kiosk. This wasn’t the case here.

I searched around the garage in hopes of finding a working kiosk, and I had to report back my findings to the angry masses. There were only 2 kiosks that appeared to work, both on the first floor. One said it was only taking cash and would not offer change. The other appeared to be working fine, though word was getting around the garage that the machine was fickle, and any potential success was a time-consuming and trying task.

The group of older ladies in front of me had successfully found enough cash between them to grant escape from the robots that controlled this garage. I was now next in line, and a younger couple approached me for an update. I told them of the saga so far and they became my audience for my first attempt at using a credit card.

The machine wasn’t intuitive, which is often the case with these parking kiosk machines. It’s often unclear whether it’s processing the request, or waiting for the user to hit the OK button, again. The process seemed to be going well and I sensed that maybe there was a bit of user-error that surrounded the previous uproar. It threw an error message back to me and I jokingly blamed the couple behind me for not being completely silent during the transaction. They laughed, and I decided against telling them my reoccurring joke of the day; the one about how kids are free at the festival but then cost a ton of money on funny outfits. It was already established that I was funny.

It was during my second attempt to pay for parking that I realized it wasn’t user error. The machine just didn’t work very well. It thought hard for a long 30 seconds before spitting out an error. It was here that I admitted defeat. I had a $20 bill on me and agreed to pay in cash. I would not get the $2 back in change, but at this point I didn’t think there were only options.

I didn’t stick around to see how the couple behind me fared with the machine. I later read on Facebook about the chaos that others experienced as people flooded the garage to leave after the festival ended. I did not see any response from anyone in charge.

So I gave the $2 as a tip to the City of New Bedford. I’m not sure I’ll attend next year, and that has nothing to do with this minor parking problem. I’ve changed, and my situation has changed, more than the festival itself has changed. I’m just not sure there’s a place for me and my family in its current arrangement. It’s more likely that we’ll try again in another 6 years.