I feel like I know the story of Guy Clark’s contemporaries like Townes Van Zandt, Gram Parsons, and Emmylou Harris. They either burned out while very young, or became an immortal silver-haired angel. I instantly know songs from their catalog as they’re frequently covered by other currently living artists. If there’s a song that sounds like it came from this era of country music that I can’t place there’s a good chance it’s a Guy Clark song. He died in 2016 of boring cancer like most of the rest of us will.

This week Steve Earle released an album of Guy Clark tunes called “Guy”. It’s been on repeat in my house for the last few days. It’s helping me departmentalize the Guy Clark catalog in my mind. The tongue-twisting lyrics of “Anyhow I Love You”, the lonesome cry of “Desperadoes Waiting for a Train”, and the foot-stomping “New Cut Road”. But it’s “LA Freeway” that will always trigger some minor PTSD for me. This post is about that event.

I was in Southern California for my brother’s wedding with most of my family. We had rented a mini-van and squeezed 5 adults, 2 car seats, and a collection of luggage into every square inch of it. During our 2 week stay it was always full but on the morning of July 3, 2017, 13 months after the death of Guy Clark, I had the van to myself. I was returning my tux to a strip mall in Little Saigon in Orange Country and excited for what the rest of the day would bring. We were going to Disneyland when I returned, and more imminently, I was going to get a bubble tea from one of the million options in the area. This LA Freeway had other plans.

Images from the event show that I was on the Garden Grove Freewey (22) south of Anaheim. I understand that this isn’t LA proper, but as someone from New England it’s close enough for me to forever connect the song to this event.

The highway was eerily empty on this post-rush hour holiday-week Monday. I was California daydreaming of bubble teas when the highway turned briefly into a Mad Max style hellscape. In the flash of a split second I saw what looked to be a flaming ball of metal bouncing down the highway. From what I could tell it was the size of a softball but the surrounding flames obscured the size and bouncing in the style of Fire Mario. It wasn’t heading directly towards me but I knew it to be an imminent threat. I had no time to react and any quick movement I was to make would likely make matters worse. These were the thoughts that flashed through my head as I hunched my back to brace for impact.

The far back left window exploded with glass, though I was otherwise unharmed and the vehicle seemed to operate fine. A car in front of me pulled over to the side. I had no idea how or if it was involved in the flaming ball incident but I pulled over on the highway right behind this Jeep.

In hindsight it may have been more dangerous to park my car on the side of this LA freeway than it would have been to just continue on my way with the broken window. The first thing I did was to get out of the van and search the back for this flaming ball. I didn’t want to reach around blindly, but it quickly became apparent that the flaming ball wasn’t in my car. I don’t think it’s presence would be subtle enough to warrant that much searching, especially without a notable smell.

The flaming ball had struck my car directly below the window so it didn’t go through. It likely rolled off into the dry brushes and caused a slew of new problems that weren’t mine to deal with. Regardless the impact was enough to blow out the window completely.

I walked over to the man in the Jeep. The narrative in my head concluded that the flaming ball came off of his car. Maybe is was some sort of do-it-yourself modification that wasn’t done well, and he had pulled over to make sure nothing else was going to fall off. While he didn’t speak perfect English I concluded none of this was true. At first he assumed I was just a good Samaritan that pulled over to assist him. He was surprised to learn later that my car was also a victim of whatever just happened. The cops came and seemed to shrug my situation off. No one was hurt or on fire and my car seemed safe to drive for now, so I drove off with a back seat full of glass and an unexpected drafty breeze.

I still have no idea what the flaming ball was or where it came from. We did exchange information and I texted him a few weeks later. He responded that he had no idea what the ball was and I have no reason not to believe him. I do wish I took better pictures though, especially of his car, to help put the puzzle together. These are the only ones I took: 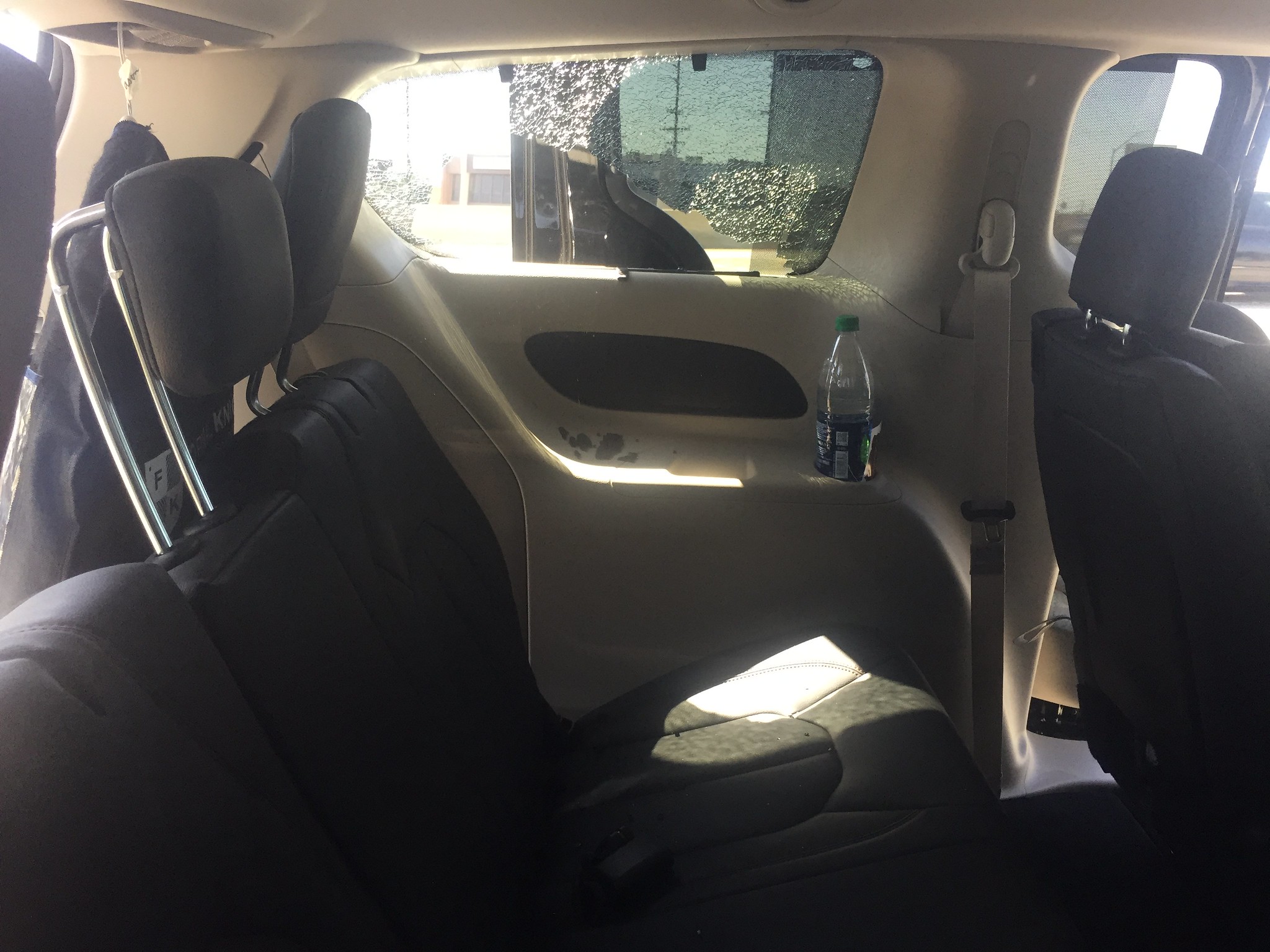 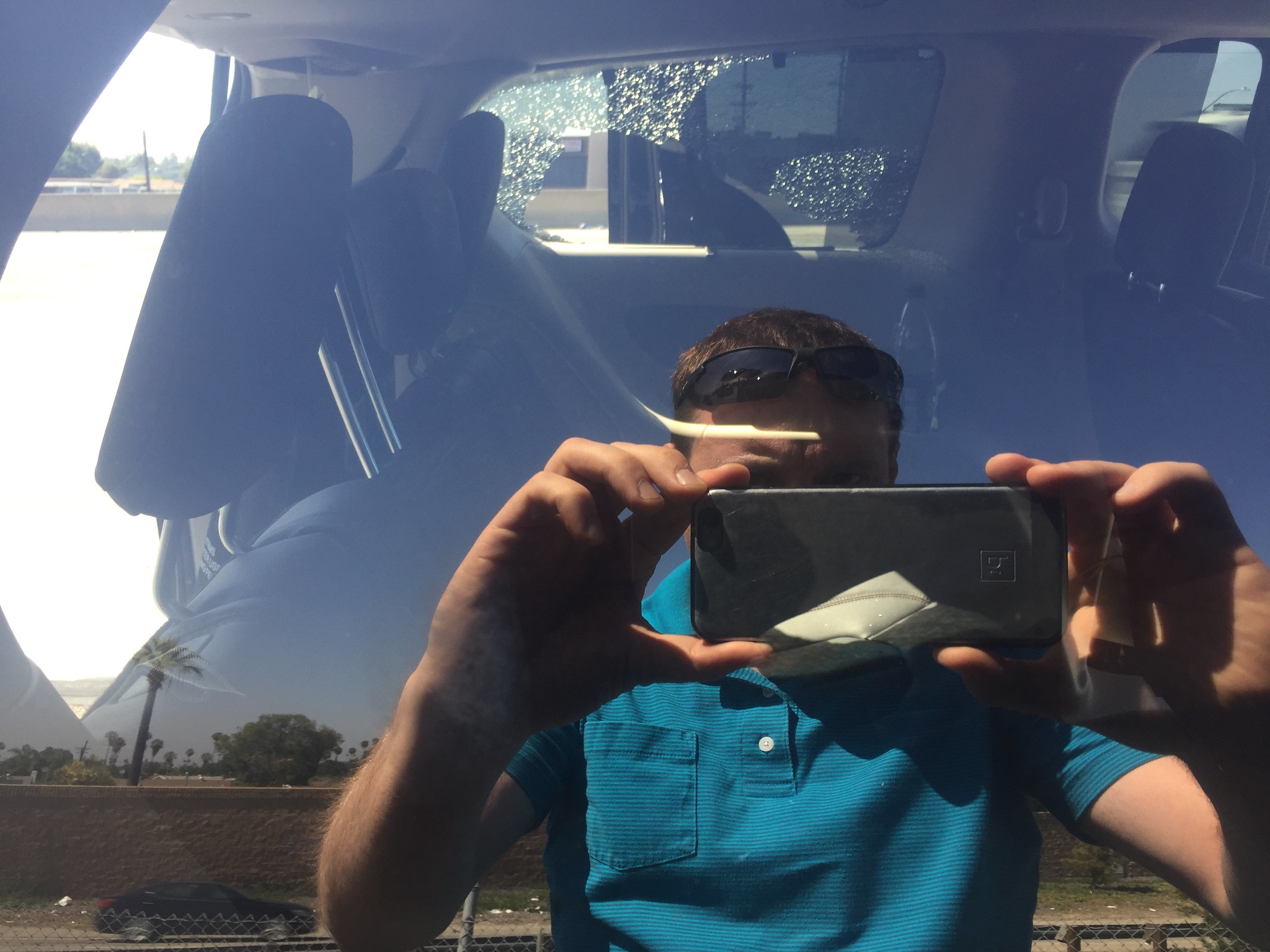 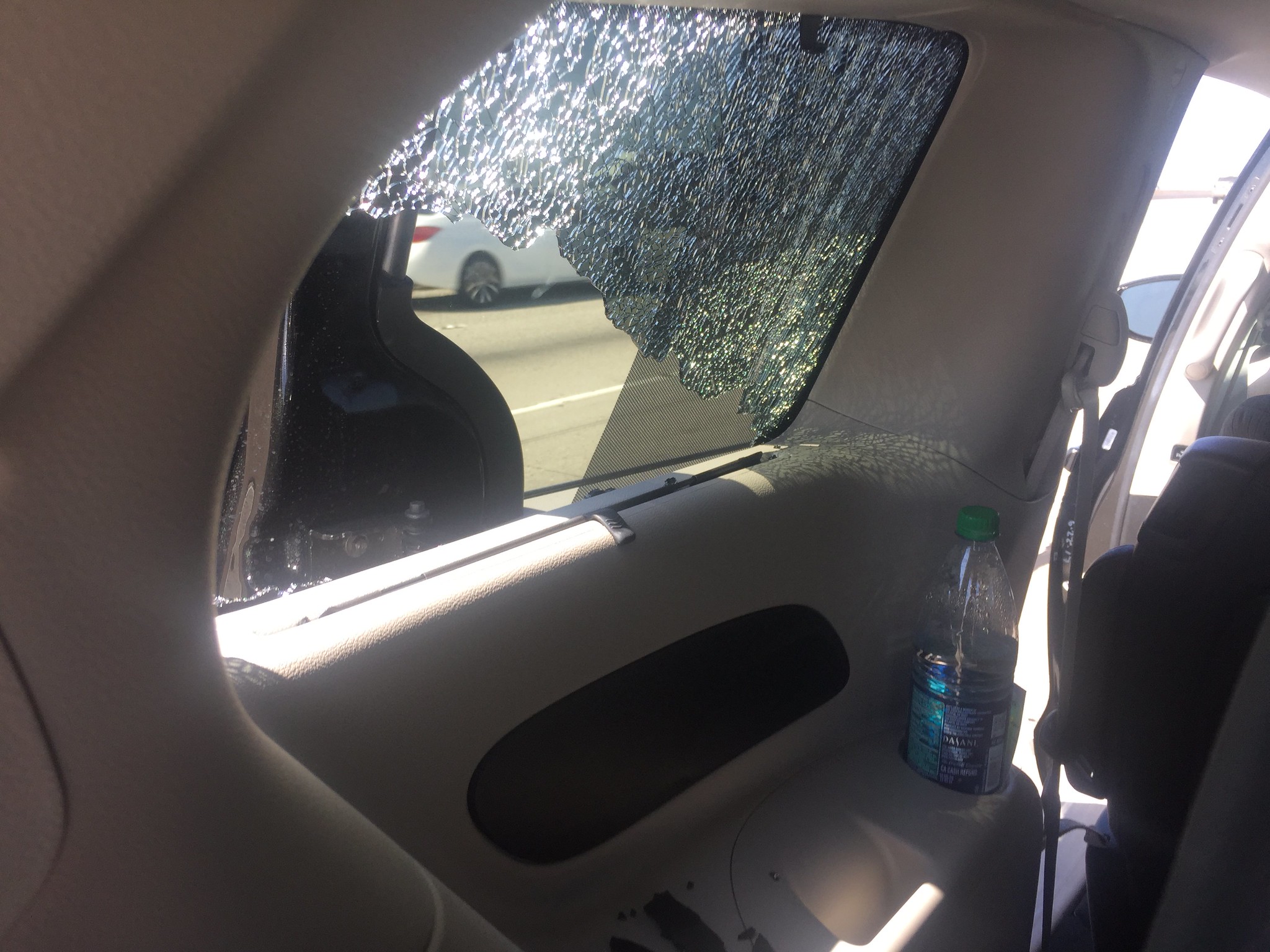 I continued my drive to the Tux place, but I didn’t even try to obtain the bubble tea. I wanted nothing more than to take care of this entire event by myself, but that was not to be. My dad had purchased the insurance but the rental was ultimately in his name and he needed to be present when the busted car was returned.

Certainly there’d be a mini-van for rent from another Hertz location in the greater Anaheim area? No. There wasn’t. The closest option was LAX which required driving on the 405, the most LA Freeway of all LA Freeways. Was it the freeway where everyone danced in the beginning of La La Land? Why not. The 405 is endgame LA Freeway.

We left for LAX from Disneyland after dinner. During the 2 hour drive we witnessed dozens of explosions in the night sky, but luckily the freeway was never hit. It was the 3rd of July so these were all probably fireworks. If the freeway was hit with a firework it would be at least a misdemeanor. I did brace for impact with every bang and I can only imagine how bad PTSD from a truly life-changing event could be. 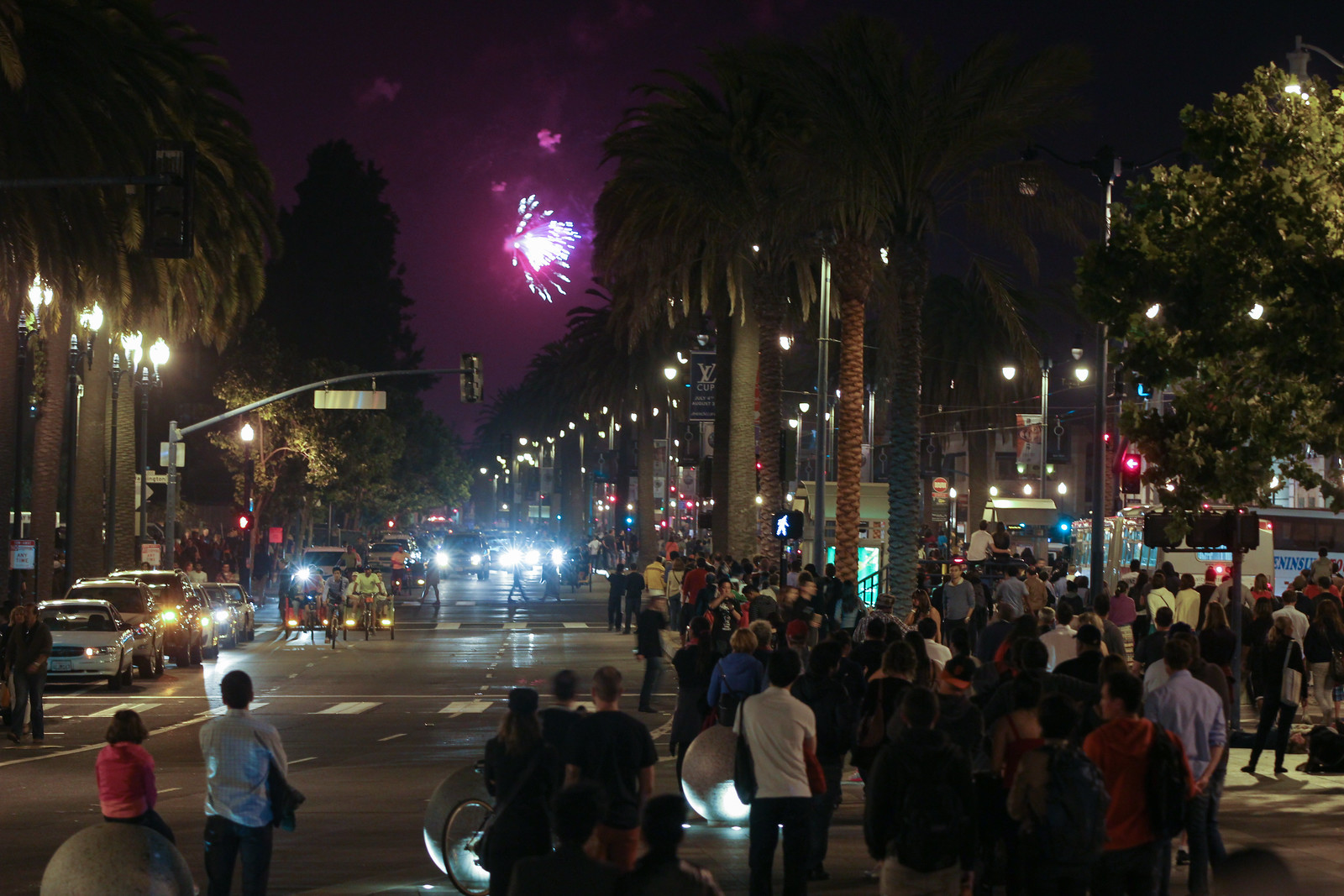 The experience at the Hertz in LAX was extremely smooth. It was not the first time they’ve had a car returned with a busted window. They are more surprised when a car is returned and it’s not on fire.

I was lucky that no one else was in the car with me during the accident, but I didn’t dwell on that fact. It’s amazing that everyone isn’t crashing into every one else constantly as they cruise down the highway at 80mph while texting about how good the Big Mac is that they’re eating with the other hand. A case could be made that I almost died that day. The flaming ball missed hitting the front of my car by a random selection of a few feet. But that logic could be applied to every experience on every highway in every city.

I can’t speak for Guy Clark but being killed by the LA Freeway wouldn’t be a bad way to go (at a reasonable age, of course). It’s certainly preferable to a long and drawn out death from Lymphoma.