The New York Times podcast “The Daily” featured a five-part series called “Charm City” during the week of June 4th. It detailed the history of tension between the Baltimore Police Department and the citizens of Baltimore, who are largely people of color (POCs). My first visit to Baltimore was on June 10th.

There are good cops and bad cops just like there are good doctors and bad doctors, and good hotdogs and bad hotdogs. Cops are put into insanely stressful situations where a split-second decision could have life or death consequences. The people of color in Baltimore, however, were born into those tense and dangerous situations. There’s no easy solution, but the podcast colored my first visit to the city.

I arrived in the city at around 11AM on a Sunday morning and began to walk north towards the city’s Mt. Vernon neighborhood. My first impression was that the architecture was beautiful, though it was otherwise empty. It was a Sunday morning, and a Sunday morning in Boston’s financial district would have been equally empty. 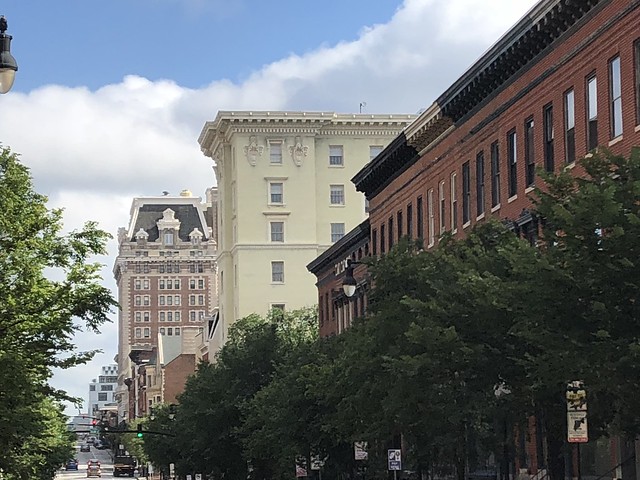 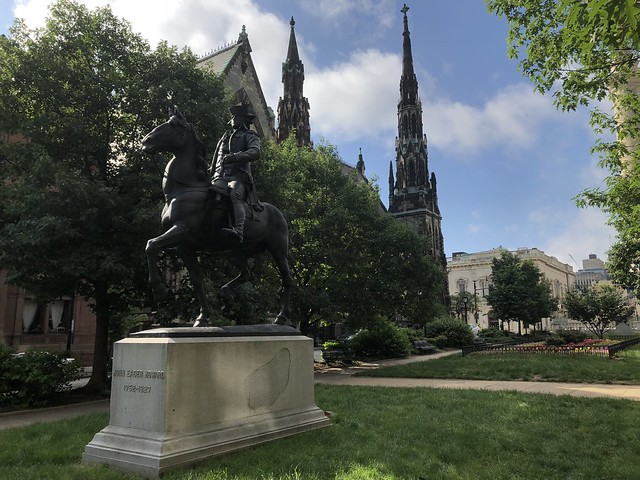 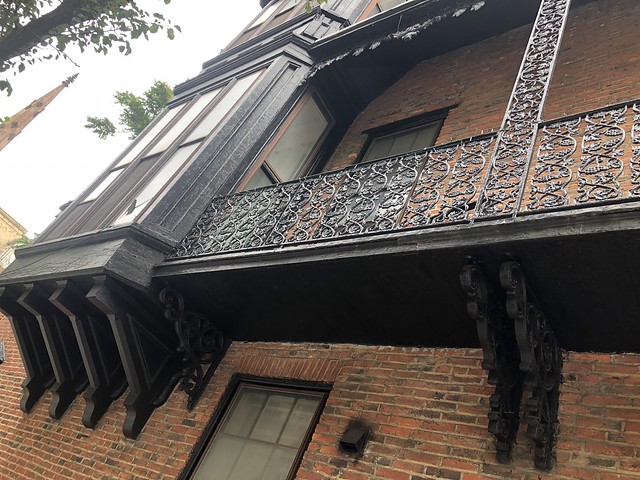 While the Mt. Vernon area seemed affluent, I didn’t have to walk far for some urban decay. Homeless people were prevalent, which would be a theme for my short stay. The hippy in me says that the urban decay and homeless problem can work together and cancel each other out, but there’s no money in that. 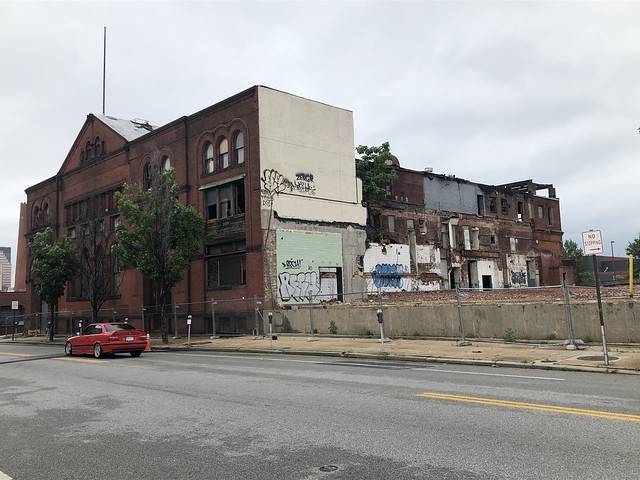 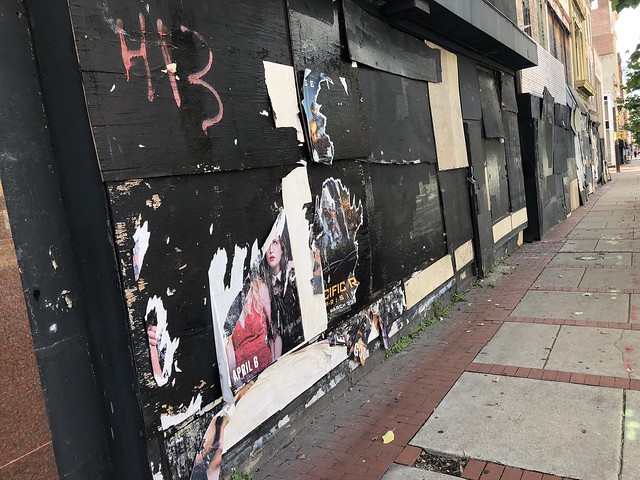 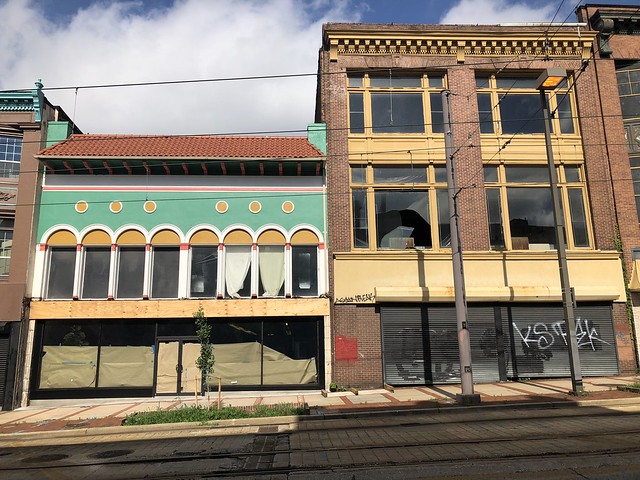 The Inner Harbor area was clearly the area for tourists and tourist traps. It contained both a Bubba Gump Shrimp and a Hard Rock Cafe which are designed to catch tourists in their salty traps of mediocre and over-priced food offerings. I was hungry after my small walk and flight and found myself here looking for a lunch spot. It was here that I started noticing the number of people in Red Sox gear as the Red Sox were in town playing the Baltimore Orioles. The fact that I was in town from Boston at the same time as the Red Sox were in town was a complete coincidence, and one that I’d take advantage of the next day. There were too many Red Sox fans around to politely head-nod at them all. We otherwise ignored each other.

While I’d like to say I found the place for lunch where locals gather to eat their crab cakes, I instead chose a tourist trap disguised as a haunted mental hospital called Phillips Seafood. It’s a local chain, and likely overpriced, but it seemed like a perfect place to sit outside on the water with a beer and a crab. 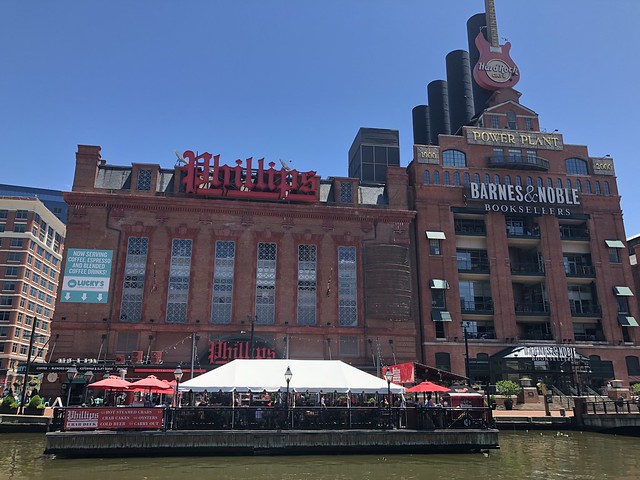 The waiter was very friendly, which I took advantage of and asked his option of nearly everything. I wanted to try everything, but the menu had limited a la carte options. I opted for the crab cake dinner (with cole slaw and potato salad) and a single crab (the only a la carte option) per his recommendation. While I would have loved to add a soft shell crab or snow crab leg, I would have needed to order the entire associated dinner. The cole slaw and potato salad were good, but I certainly didn’t need a second round of them. The crab cakes were excellent, though I didn’t have much of a reference to base that on. 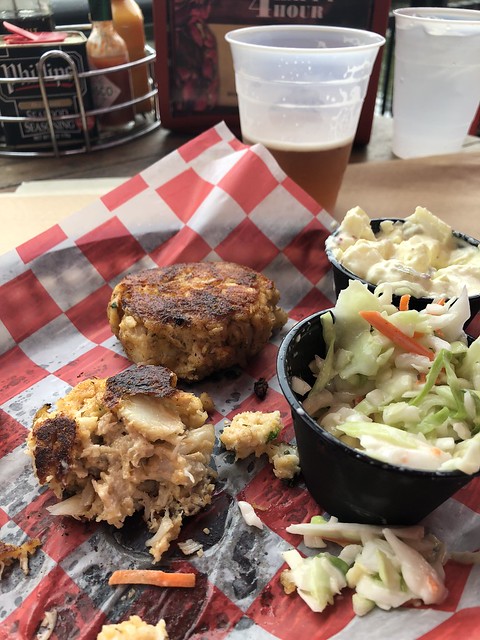 The hard-shell crab itself came covered in clumps of old bay seasoning which could easily be mistaken for dirt. I was even fooled for a second as I touched the crab and licked my finger (it wasn’t dirt). The waiter said that the act of opening the crab myself would make me appreciate the work that goes into making the lump crab cake. The line was likely part of the employee handbook. While I saw his point, I also tend to think this about a variety of food that comes at a much cheaper price tag then crabs. It would take me hours to de-shell the sunflowers needed for a 6-ounce container of sunflower kernels and it’s sold for less than $2. I’m sure there is machinery for this, but there’s no reason why there can’t be a crab opening machine. Or maybe it’s the fact that fresh crab can’t be opened in a factory in Asia before being shipped over to Baltimore.

As I prepared to pay the check I opened my map app on my phone and asked the waiter where I should walk to next. I didn’t really have any plans for the afternoon and wanted to see something besides the inner harbor and downtown area. He recommended the Fells Point area as a trendy spot with bars and cobbled streets and described it as a 5-minute Uber ride, implying it shouldn’t we walked. I asked for details on why I shouldn’t walk and it was obvious he wanted to say it was unsafe, but he was struggling to find the politically correct terminology. He eventually said that there are lots of projects in the neighborhood to the east, but it could be walked safely if I stuck to a path along the water’s edge. Crime doesn’t like a nice sea breeze, I guess.

I took his advice and walked to the Fells Point area along the water. It started to rain and I took out my $10.99 umbrella I had bought a few hours earlier at CVS in anticipation of the rain. The incoming rain was slightly more exciting than the walk as the view of the harbor was obscured with fog. The people I saw on the walk were preoccupied looking for shelter as they had not previously purchased a cheap CVS umbrella. I was comfortably and affordably dry. 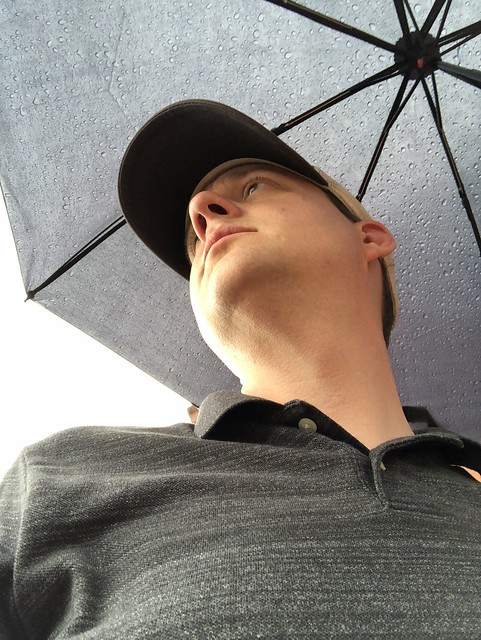 Fells Point was exactly as described, actually more so than I imagined. There were cobbled stones and there were bars. Tons of bars. And people. It was my first experience in the city where I felt the energy of a major city and community. It was still raining, but the outside seating areas of bars were still packed with people under their table umbrella. It was around 2PM, and the bars all looked full, so I decided to join in. 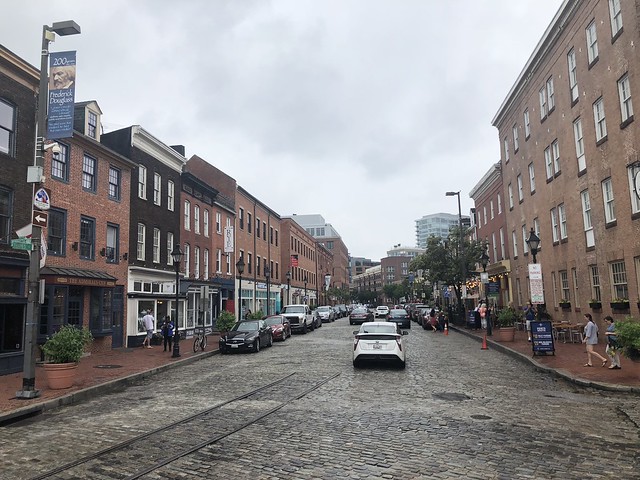 I entered Kooper’s Tavern and the bar looked full so I prepared to turn around. The nice lady in the front suggested I take a look at the upstairs bar, which after a quick climb, revealed an open spot. The seat was at the end of the bar and kitty-cornered to the other patrons. After a quick minute the couples to my left pointed at my Boston hat and we bonded over the proximity of our home towns. They were from Lynn which invokes the saying “Lynn, Lynn, city of sin” to the uncreative and uninformed. My town of Medford has the same sigma, and people are quick to call it “Mefa” as if it’s either a creative joke or how locals actually pronounce the town. Neither are true, and both towns have a lot to offer, but it will be years before those stigmas are removed. 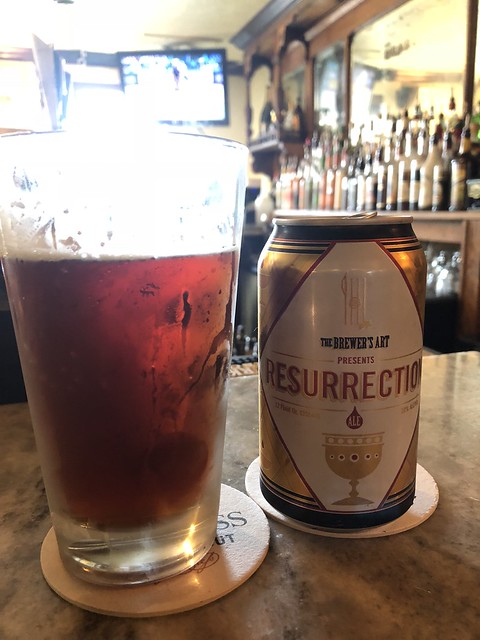 The couple looked wealthy, dressed for cocktails on a yacht. They were in town just for the Red Sox game. While the flight and game tickets were relatively cheap, it’s a level of wealth above mine. Their bill came before I was finished at the establishment and it crossed my mind that they would add my single beer to their tab after our pleasant conversation. They didn’t, and they walked away thinking they’d never see me again (which wasn’t true).

Now alone at the bar I chatted a bit with the bartender. Just like the waiter at Phillips Seafood, I opened up my phone’s map app to add a visual to the conversation. I showed him where we were (he likely knew that) and where I needed to get to (back to the hotel) and the way I had walked previously. I highlighted the alternate path to get back, which was the same one that the Phillips waiter instructed me to avoid. “Will I be safe if I walk back this way?” I asked in a way where the bartender knew that the answer should be “yes” if he wanted a better tip. He laughed and said I’d be fine in the day so I proceeded to walk home via this forbidden passage.

I headed north on Caroline Street and didn’t get very far before hearing someone singing John Prine’s “Angel from Montgomery” in the distance. As I walked closer it was coming from HandleBar Cafe, and even though I had just come from a bar, I decided to stop in and listen to a few songs. He proceeded to play the Rolling Stones’ “Dead Flowers” and then a song I didn’t recognize before going on a short break. I used this as an opportunity to use the bathroom before I continued my journey, though I wanted to make sure and shake the singer’s hand before leaving. It wasn’t that he was anything spectacular, but I wanted to let him know that I stopped by specifically for the John Prine song, and that I thought his rendition was nice. I thought it may make his day brighter. Besides the fact that I’m kind of bragging about it now, it was a selfless act of kindness. 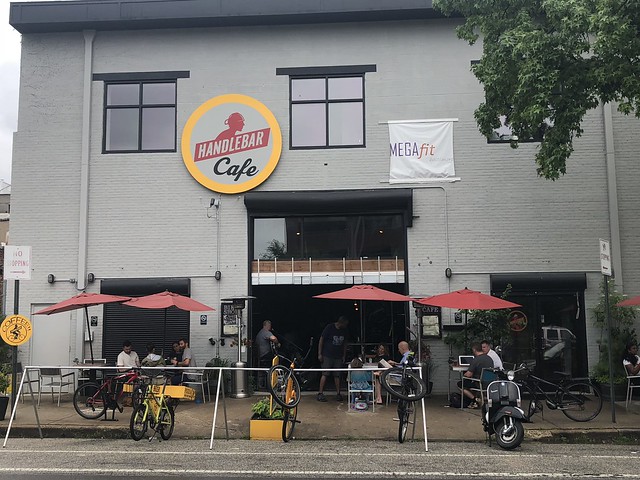 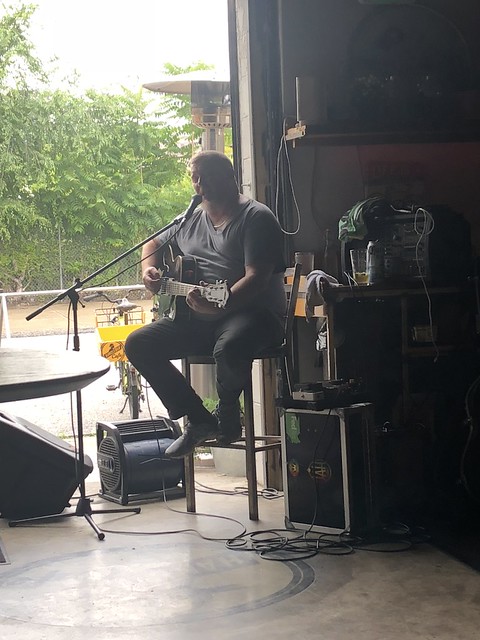 I made my way north towards Fayette Street. If anything, the walk was boring. It was full of dull brick residential buildings that would probably fall under the category of projects. I saw a POC family getting into their minivan and laughed to myself that this everyday activity may be the most exciting thing I see on the “dangerous” path home. It was. Anyone familiar with Baltimore will likely tell me that I didn’t go anywhere close to the real dangers of Baltimore and they’re probably right. Upon getting closer to my downtown hotel I came across a short strip of road that was littered with what seemed like a dozen strip clubs. 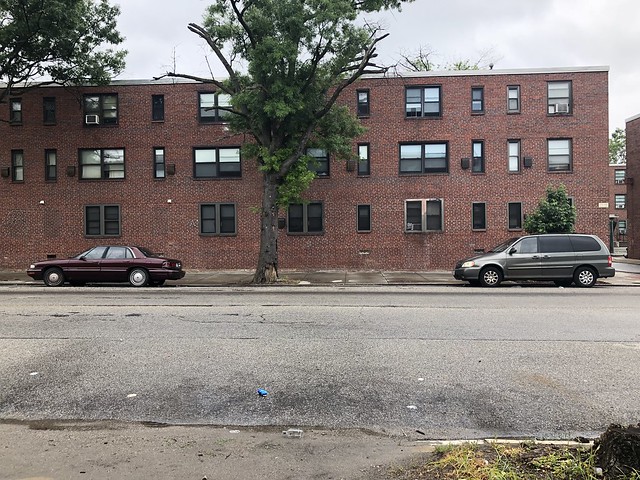 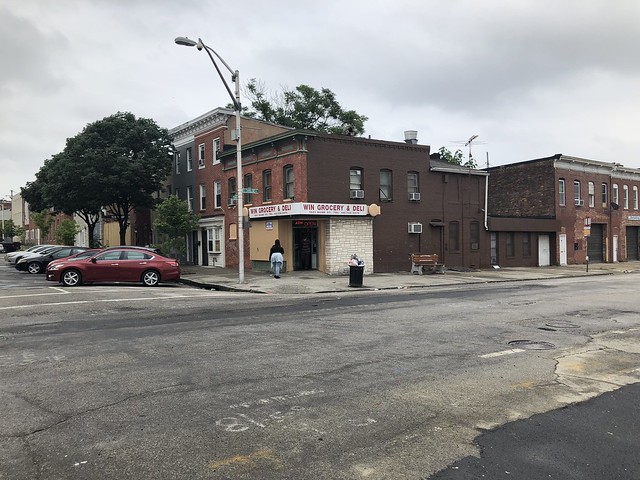 Once I got back to the hotel I took a quick nap, which is uncharacteristic of me. It had been a long day already. Nothing else of note would happen that evening, and it’s arguable that nothing of note happened earlier either.