The doors for the park opened at 5pm and I was inline with a few hundred other fans as the gates opened. I was hungry and asked the guy working the beer stand what the quintessential Camden Yards food was. He didn’t have to think about it. His answer was the sliced meat sandwiches at Boog’s BBQ. It’s not what I expected, but I didn’t question his answer so that was my next stop.

I asked the young man at the Boog’s stand what was the best food behind the counter that I could order. He said the sliced meat sandwich with chips. I asked what the best meat option was, and he said steak. That’s what I got, though I’m not sure the young man found me as obnoxious as I sound looking back at the interaction. 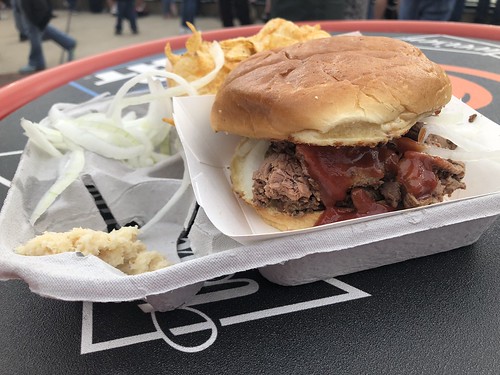 Topped with onions, horseradish, and the Old Bay-seasoned chips, the sandwich lived up to the hype. I ate it all, knowing that this was not my final meal of the evening.

To me, the quintessential ballpark food is a hot dog and peanuts so I had this my second dinner at the ballpark. There are 3 ways to cook a hot dog: on the grill, boiled, or on gas-station style roller bars. Fenway boils them, which works perfectly. Camden Yards puts them on the roller bars, and the result is inedible. I’m not sure if the hot dogs are disgusting prior to being placed on these bars, or the bars just make them disgusting, but it’s moot. These hot dogs never finish cooking, yet they were cooked before being placed on the bars. They exist in a strange limbo; a limbo that destroys the hot dog. I had two bites and put the rest under my seat. I considered it a win that I didn’t get mustard on my pants.

If I had to guess, I’d say the ratio of Red Sox to Orioles fans was 50:50. I wasn’t special for wearing a Fenway hat. I can envision a situation where someone wears the visiting team’s gear to a park populated with mostly local fans of the home team. The visitor cautiously walks the halls of the stadium, knowing that at any moment someone’s drunken uncle may spit at them. But when they walk by another person sporting the same visitor’s gear, they share a special stare and head-nod to show they are not alone in this. There was no such head-nodding by other Red Sox fans at Camden Yards. We were not the minority. We were gentrifying the stadium.

I like baseball, but I don’t pay attention to every single play when at the ballpark while watching game #50 of a 162 game season. No one does. But, there are clues that help me jump back into it. For example, I may be working on an exceptionally difficult peanut and my mind is on nothing else. I know I’m at a baseball game, and my team is at bat, but all other facts about the event escape me for this split-second of peanut splitting. An unexceptional event happens in front of me; the pitcher pitches the baseball and the batter fails to hit it. If I’m at my home stadium the formula is simple. If there are cheers I know it was a ball. If there are groans I know it was a strike. If something good happens for my team and my fellow fans, the fans that are paying attention clue the rest of us in by cheering or groaning.

The formula is easily reversed too. If I’m supporting the visiting team I can easily switch it around and understand that groans are good for my team, and cheers are bad. But, when the crowd is split so evenly, these clues disappear completely and it becomes a bit of a mind freak. Strikes and Balls receive equal praise. When a ball is hit deep there is cheering of hopeful excitement, and when it’s caught on the warning track there is equal cheering that the ball stayed safely in the stadium. It’s like everyone is just so happy to be there that they’re cheering for baseball in general.

I do not know what it sounded like when a run is scored at Camden Yards. The game went into extra innings with no score and I left after the 11th inning. The Red Sox won in 12 innings.