Getting out of Newport (Saturday Edition)

On Saturday morning we parked in a lot that seemed like a world away from the festival. It was on a large hill that overlooked that bay and the bridge, but was about as far away from the event as possible. I assumed this meant it would take forever to exit the lot when the event was over, and that assumption was correct. However, with this in mind I had a very pleasant and peaceful 90 minute wait.

My wife had homework to do, and she played chicken with the car battery so she could read her book in the otherwise dark car. I watched the parking lot for a few minutes and found that not a single car was moving anywhere. We were as far back as possible, and I saw no reason to put my car in line only to be cut-off by the thousands of cars in front of me.

I had 90 minutes to kill on the side of the hill as twilight turned to no light at all. I thought of joining the other groups of people that were far more prepared than we were. Some had donuts, and some had instruments. I would have loved a little of both, but I didn’t inject myself into their conversations.

I sat on the hill and watched the storms in the distance. There were constant flashes of lightning, though I was too far away to hear any thunder. I listened to a young man play guitar and sing some songs to his small group of engaged and sometimes-harmonizing friends. He was more likeable than your standard guitar-playing-dude-at-a-party, until he started talking endlessly about cutting his own record and complaining about the increasing costs of recording on vinyl. 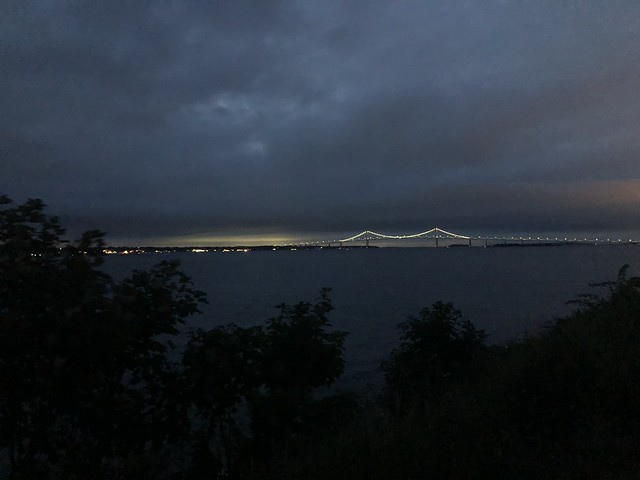 When they departed I couldn’t help but hear another group of two men discuss the surprise act that turned out to be Mumford & Sons. They summed up my feelings exactly. It was a fine act, but one that was not worthy of such incredible build-up. It was comforting to hear since I think it’s very difficult to speak critically about such a wonderful festival in general.

When I saw cars finally move I re-entered my car and said a tiny prayer that it would start after the lights were on for so long. The engine didn’t put up much of a fight and we exited the festival grounds as one of the last cars on the property.

Once we got on the road my wife and I brainstormed reasons why Newport Folk Festival allowed such excitement to build. We both agreed that Mumford & Sons couldn’t have been the original plan, and our only hypothesis was this… The festival was planning for a huge name or reunion to occur Saturday night. It would be something that would make 2018 stand out among all the previously wonderful festival years. They hedged their bets by having many options in the works at the same time. Bruce Springsteen was a maybe, so was Neil Young, Willie Nelson, and Fleetwood Mac. But by a stroke of very unfortunate luck all of these acts backed out. Mumford & Sons was their safety band, but they couldn’t announce them as such. To announce Mumford & Sons ahead of time would be to admit that it wasn’t the plan all along, and that Mumford & Sons wasn’t big and famous enough to deserve an unannounced closing spot. Or maybe they just really liked Mumford & Sons and surprises. We’ll never know the true story.

The festival doesn’t cater well to music lovers who also like eating dinner at a reasonable time. No one wants to leave their nice spot before the last act goes on, and when the festival ends all of the food vendors have already packed up their lobster rolls and chicken sticks.

At 10pm on Saturday night we found ourselves at McDonalds. It wasn’t a decision we made lightly. We hadn’t looked at a McDonald’s dinner menu in 20 years so we scoured it for familiar delights. I used to frequent McDonalds as a teenager but I cut out fast food completely after college. I can say that I’ve never had a McDonalds sandwich or offering that was introduced after the McLean Deluxe. I wasn’t going to destroy this amazing feat, so I ordered a Big Mac.

I recall that a Big Mac is a fairly good sandwich to eat in the car, but I was proven wrong. It’s very floppy, and my first re-impression was that every bite was just a lot of bread. I think if I go back in 20 years I’ll get the quarter-pounder with cheese.

To eat fast food this late at night is a dangerous game for an adult who doesn’t often partake. There’s a waiting game that one plays after the sandwich is completed and the regret begin to fades. Will I spend the night in the bathroom? In the hospital? We appropriately named the time between eating a Big Mac, and a full digestion period, “The Weight“. Luckily, I didn’t pay any greater price that night for eating a Big Mac so close to bed.

Getting out of Newport (Sunday Edition)

Saturday was a slow and poetic exit, full of reflection, eavesdropping, and poor dietary choices. But on Sunday we were set-up for a smooth departure. The parking angels put us in a lot right by the exit that appeared to be reserved for staff or otherwise elite guests. It was so shocking and fortunate that I snapped this picture to share with my dad, a lover of a good parking spot with such a foolproof exit strategy.

Part of me was sad that I wouldn’t have the opportunity for reflection on the hill again. But the other part of me was excited about getting home before midnight.