For Saturday and Sunday I attended the Newport Folk Festival with my wife around my arm, not my camera. This entry is about our experience during these two days and any photos are limited to iPhone shots. Will this post still be interesting without the crutch of pretty pictures providing the majority of the substance? (spoiler alert: no). As always, the photos featured in the post are my own, but the linked content may not be.

The closing spot on the calendar for Saturday was listed as “To Be Announced” and the predictions on who it could be were being carefully calculated based on the schedules of some major artists. Bruce Springsteen and Neil Young were named early on which set the bar very high. I tried and put this in the back of my mind so I could safely enjoy Saturday at Newport. 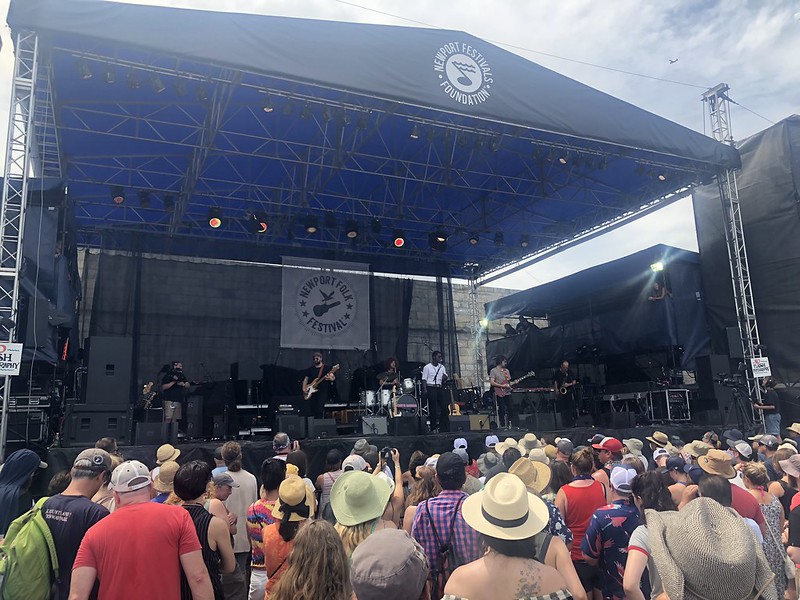 Saturday began with Curtis Harding, who was best described as fine. There was nothing overly memorable about the performance and no guests appeared. It was the first performance I saw since Jason Isbell with David Crosby, so the bar was set very high to begin the day. Curtis Harding reset the bar at a reasonable height.

Lukas Nelson and Promise of the Real

When the beer tent opened up at noon we joined a parade of people with fleeting sobriety. The line for the beer tokens is always far longer than the line for beer, or just about anything else on the fort (except for posters). I anticipated this and purchased 10 tokens the day before (Friday) so my pockets were already lined with beer currency. As I stood in line to order them on Friday I was worried that I was ordering too much. Would the festival organizers pull me into a separate room, filled with my entire family and friends, for a quick intervention? The people in front of me squashed my concerns about my own drinking plans as they ordered 44 tokens. I was happy that I had plenty of tokens left over for Saturday.

We took our beers and dangled our feet over the peer. It was there that we made some quick and temporary friends with a group that was lubricating with both hands. This was also the first time that we discussed the surprise that would be closing the festival. We mentioned Bruce Springsteen and Neil Young, of course, and referenced the relevant Reddit chains as our only source. 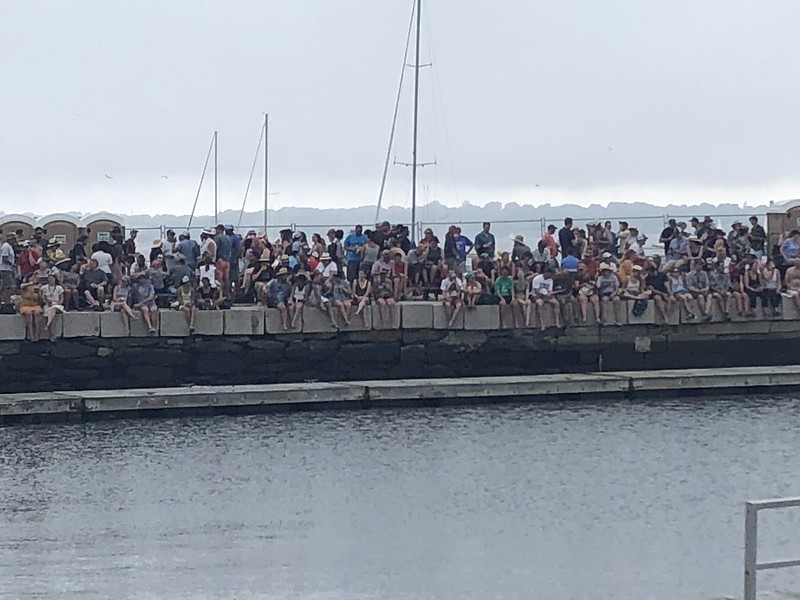 We had new clues to discuss after being at the festival the day prior. I mentioned to the group that I had met Greg Liszt in the parking lot, the banjo player for Bruce Springsteen during his Seeger Session tour, and that he was a bit dodgy with my questions. That was one more point for an appearance by Bruce. David Crosby appeared on stage on Friday, which combined with the Neil Young rumors could produce a Crosby, Stills, Nash & Young reunion. Both of these educated guesses would have been worthy of the hype that the festival created with this “Unannounced” slot.

But, these pier friends mentioned a new rumor that I hadn’t heard before; Mumford & Sons. This didn’t seem to fit, and to me didn’t qualify as a legacy artist. I knew I didn’t want Mumford & Sons, but a piece of me knew it would be them.

This conversation occurred as Lukas Nelson and Promise of the Real played on the main stage. It was actually surprising how good the sound was from this far out. The boats that filled the harbor probably had a good soundtrack to their spring break festivities. I enjoyed the conversation, and Lukas Nelson, but if I could do it again I’d go up front for Lukas, and have this pier conversation during Curtis Harding.

For the rest of the day I kept Mumford & Suns in the back of my head. There was never a moment without music, which made it hard to think of songs buried in a far corner of the brain. The only Mumford & Sons song that I could think of was “Home”, which of course, wasn’t a Mumford & Sons song. It was a Weird Al-style style parody done by American Idol season 12 winner Philip Phillips. But it didn’t matter. I had something in my head that sounded like Mumford & Sons.

Tank and the Bangas

We needed some time off of our feet so we sat on the grass near the quad stage. We didn’t know it at the time, but Tank and the Bangas was playing in the background. They were not background music, so we sat in silence for a few minutes before looking at each other and nodding. I sometimes wish that there could be trial runs for festivals like this. We’d be right up front for Tank and the Bangas. 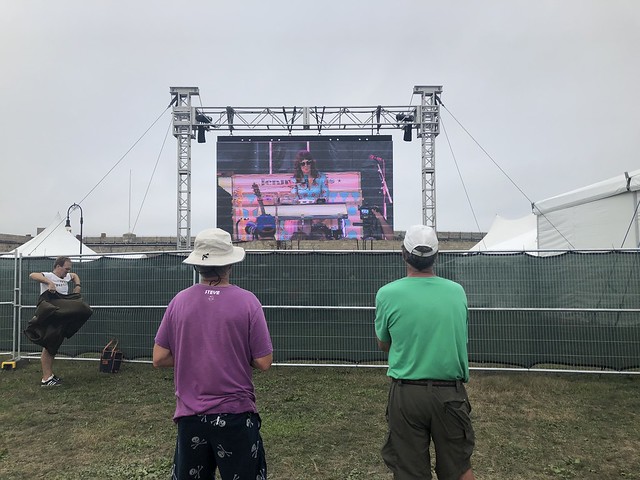 We stuck around the Quad stage for Jenny Lewis, but our only view was the side of her head, or the front of her head via the left projection screen. I wasn’t familiar with her work, but my wife was, so I was happy to step aside and let her dance. It seemed like Jenny was deserving of the Fort Stage. 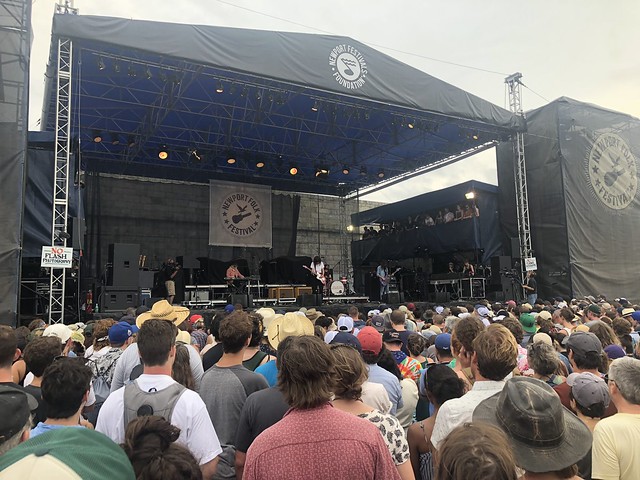 Like most fans at Newport, I approach all acts with an open mind but that doesn’t mean I have to like everything I try. I didn’t really understand Courtney Barnett. I felt like maybe it was full of angst that may be targeted at generations younger than me. Or maybe it wasn’t full of angst at all. I’ve read so many great things about her, and I’ve seen comparisons to Bob Dylan. I may lose any potential audience for this post by not gushing over her, so I’ll admit the issue could be with me, and not her. I may just need to give her more of a chance.

We had a good spot for the closing unannounced set. It was about 8 people deep but next to an impressively tall and polite Swedish couple. Like everyone else I was analyzing the stage as they were setting it up. I saw two large drum kits in the back so I was falsely comforted that it couldn’t be Mumford & Sons. I didn’t think they had a drummer.

But in the next few minutes there would be 2 nails drilled into the Mumford & Sons inevitability. First, they placed a kick drum in front of the lead microphone. No respectable legacy artist would use a kick drum while singing. They would have staff for that. Then, the banjo came out with an English flag on the back.

The tall Swedish couple decided to include us in the conversation as they too came to the conclusion that they were about to see Mumford & Sons. The man asked if I was excited and I gave the sideways smirk, which is the international face symbol for “kinda”. He initiated a Scandinavian high-five to indicate that we had the same feelings towards the next act. As we continued talking we both became a bit more optimistic. It was Newport Folk Festival after all. They’d have a crazy group of guests and surprises.

That was probably what he said. It was certainly something like that.

If he had announced “Bruce Springsteen” the place would have exploded with applause. The impenetrable walls of Fort Adams would have shattered as the Boss screamed “1 – 2 – 3 – 4”. The then-gentle waves of the Atlantic would have swelled and flipped the kayaks upside-down as the crowd screams “WHOAA” in unison as he opened with Born to Run. But when Mumford & Sons came on stage the applause was a cautious and inquisitive one. Who were these friends that they brought with them? 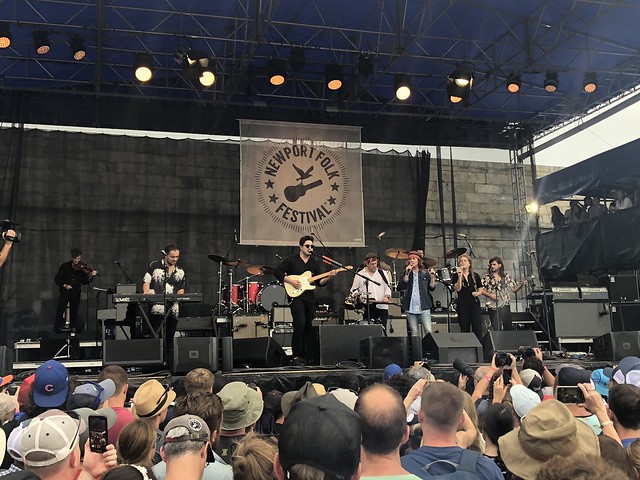 The real surprise to me was that Jerry Douglas was one of the friends. He’s reaching the status of a legacy artist in the bluegrass world, but I’m not sure how many Newport Folk Festers knew who he was. I had just seen him a week prior at the Grey Fox Bluegrass Festival, which I think gave me an extra serving of cynicism for Mumford & Sons. I had just seen the best bluegrass musicians in the world: Sam Bush, Del McCoury, Steep Canyon Rangers, and Billy Strings. Now I was seeing what to me was a novelty act that featured a bluegrass instrument.

The other guests were Brandi Carlile, Maggie Rogers, and eventually Mavis Staples. The largest applause of the set was for Mavis Staples, and second largest came when Brandi Carlile started singing. I admit that my own preference may have skewed my perception of the reaction. I clearly have a crush on Brandi Carlile.

They proceeded to play all their hits that I knew of (3 of them) and a whole bunch of songs I didn’t know. Overall, I did enjoy the show and saw the reason why they had gained the levels of success that they now have. Once the hype of possibilities left my head I was free to enjoy the set for what it was. The only point of the show that I thought was awkward was when Mr. Mumford jumped on the drum-kit and sang while drumming. This always looks weird to me, but at Newport Folk Festival it just seems unnecessary. Artists should be finding guests to share the stage, not trying to fill two roles themselves.

The highlight of the set was when Mavis Staples joined everyone for “The Weight“. It’s a perfect song for multiple artists to exchange versus, mostly because there’s just so many of them. I didn’t leave a new fan of Mumford & Suns, but I didn’t leave Saturday with any feeling of disappointment. The thrill of guessing and predicting the act was fun in and of itself in a “The Music Man” kind of way.