The headlines after the 2017 March for Science in Boston boasted that 10s of thousands of people filled the Boston Commons. Today’s headline in the Boston Globe said “Hundreds rally for science in Boston Saturday“. I’d say there were at least a thousand people, but I’m not sure the word “thousands” could have been used.

The Boston Commons was busy with Boston Marathon preparations, but the main deterrent for this year’s science rally was the weather. April is the poetic welcoming of spring, but the part about it being kinda warm is written in pencil. The day of the march started sunny and almost warm. It ended freezing and windy.

I learned more about what makes a good protest-sign photo, to me. With a zoom lens a posed photo is out of the question. I could approach a sign holder and ask that they pose for a photo, but I’d then have to back up at least 15 feet and then ask everyone in shouting distance to stay out of the way. I’ve never liked posed photography, and sign-holding/protest photography has proven to be no exception. Instead, my preferred photo was one where the subject is holding the sign casually, with the thought of sign-peepers only causing them to stand up straight, but not forcing a smiling. 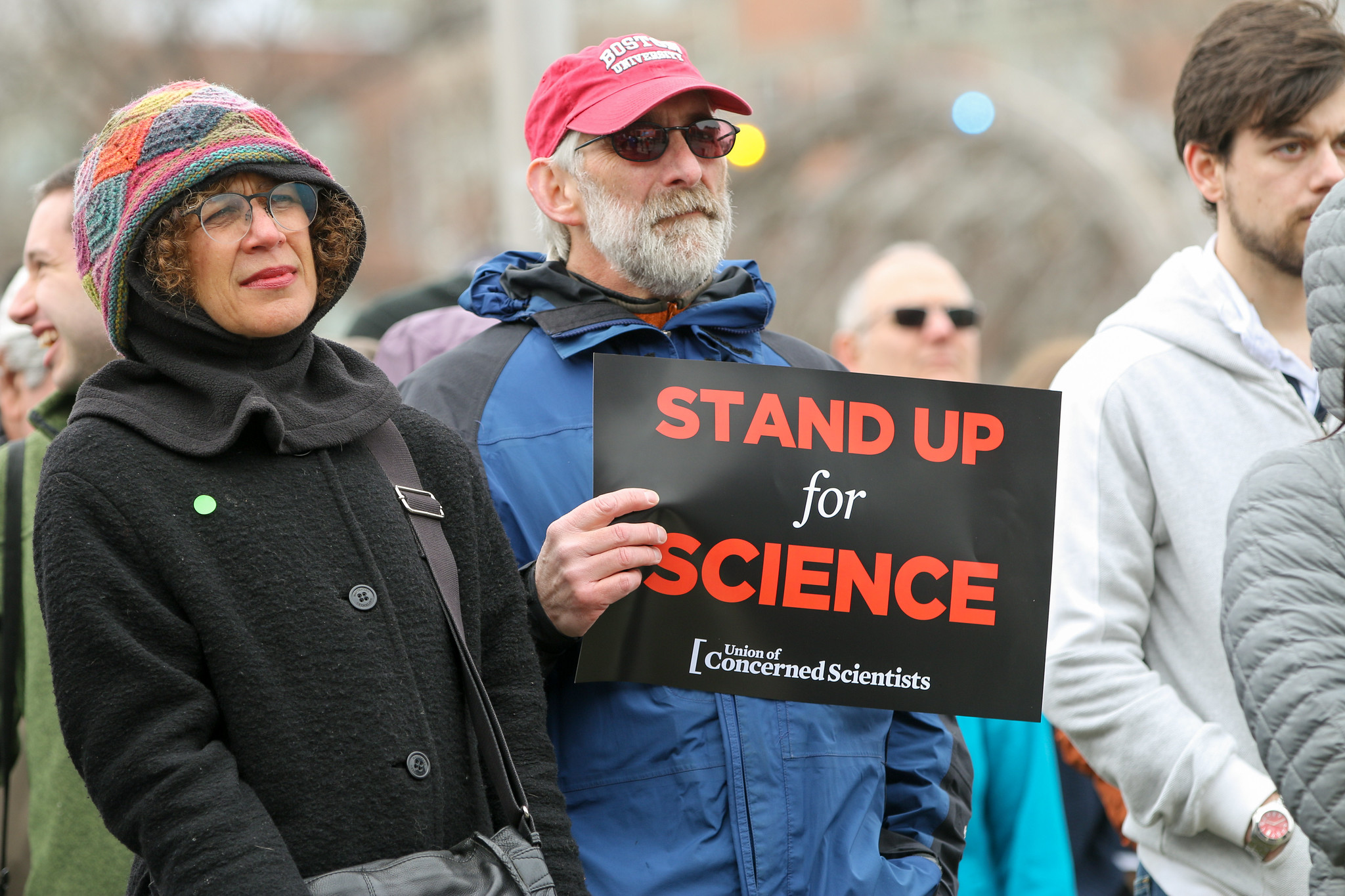 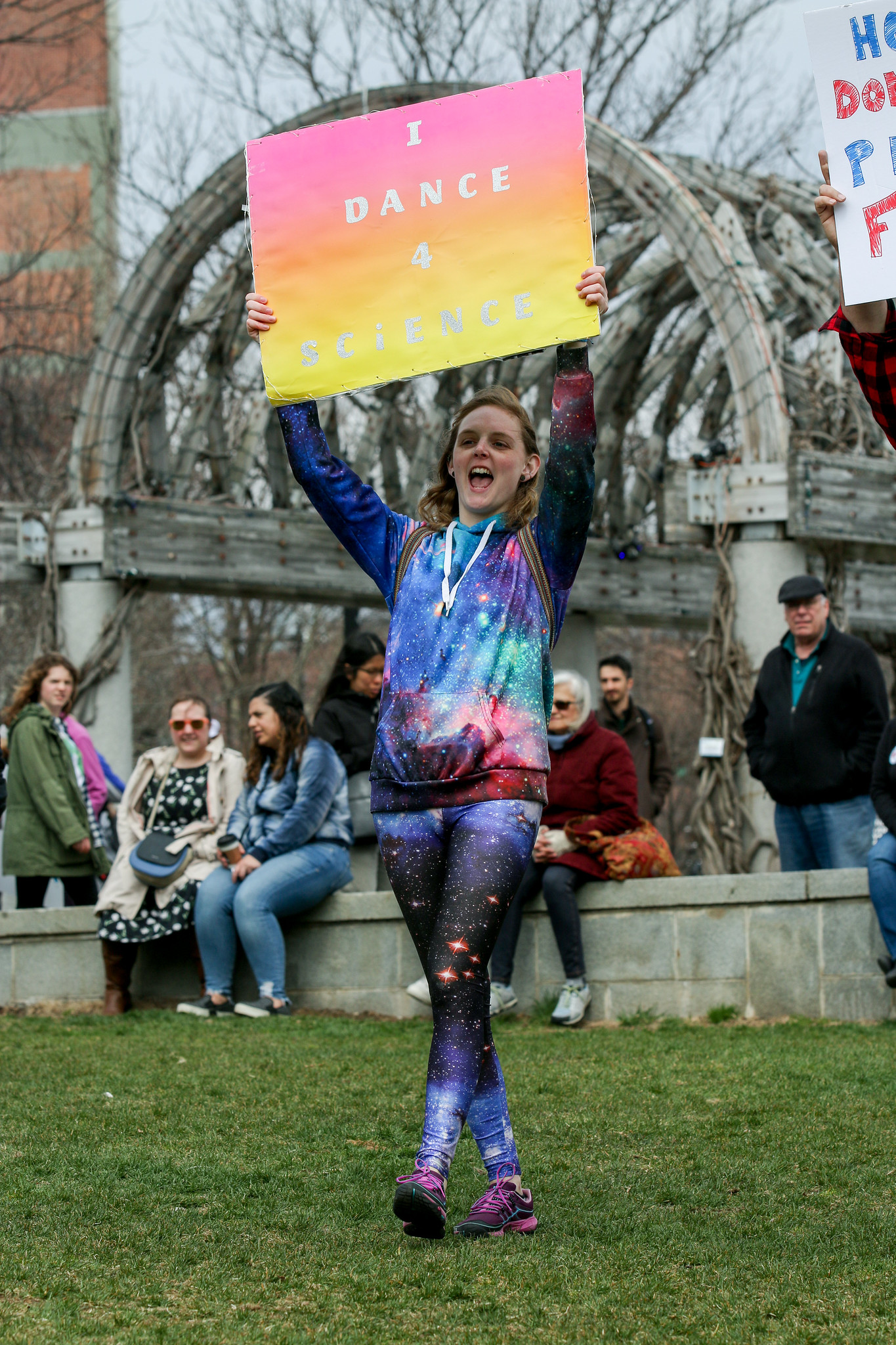 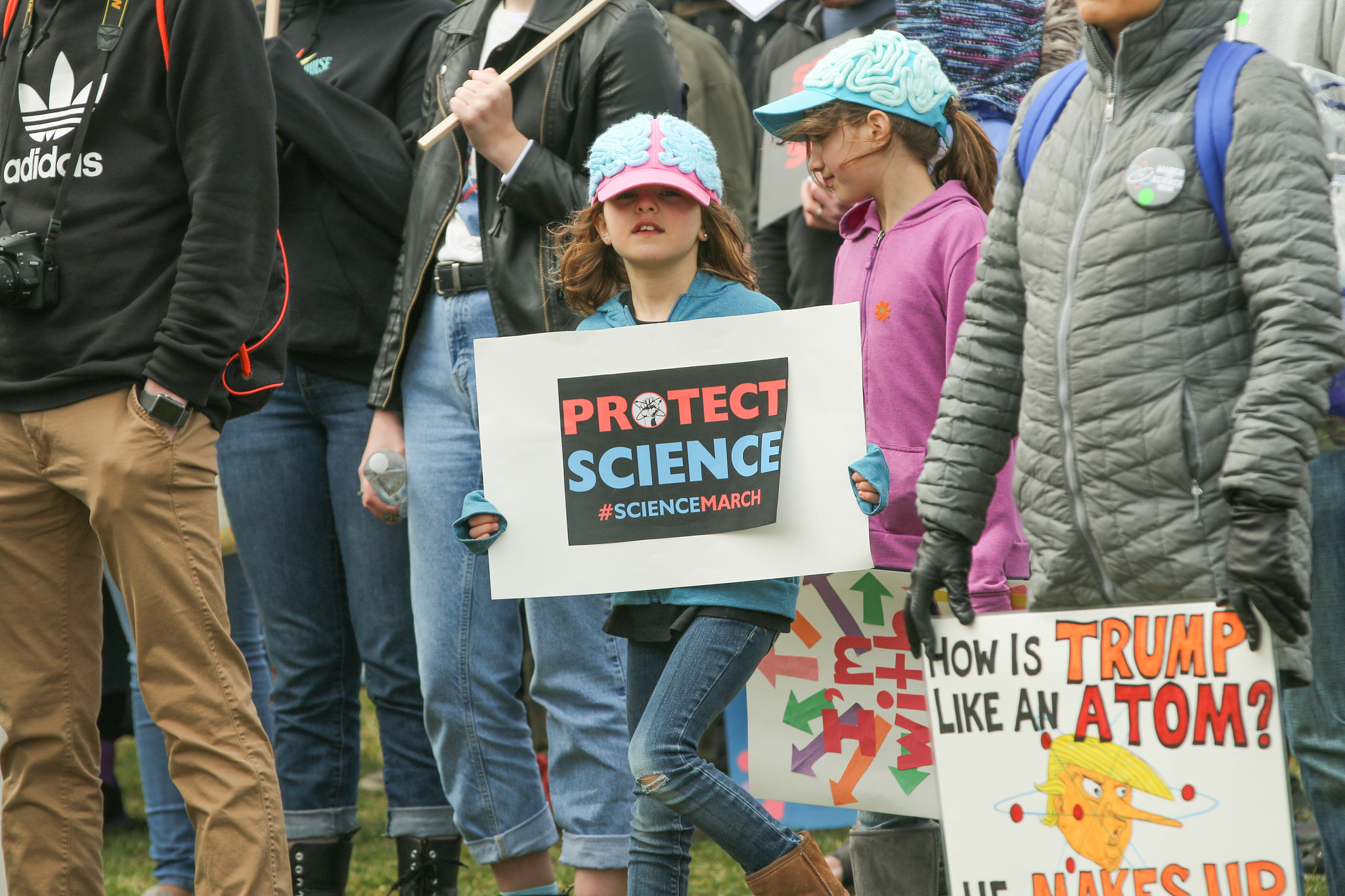 Photographers were stopping sign-holders asking to take their picture, which provided some low-hanging fruit opportunities for me. The upside of this was that it provided an opportunity for me to snap a shot from 10 feet away as the subjects were forced to stop for a bit. The downside was when a group of people were posing for someone else, these 3rd party shots tend to look a bit awkward. The only reason that this photo is at all interesting is that it catches the camera/phone of the intended photographer. 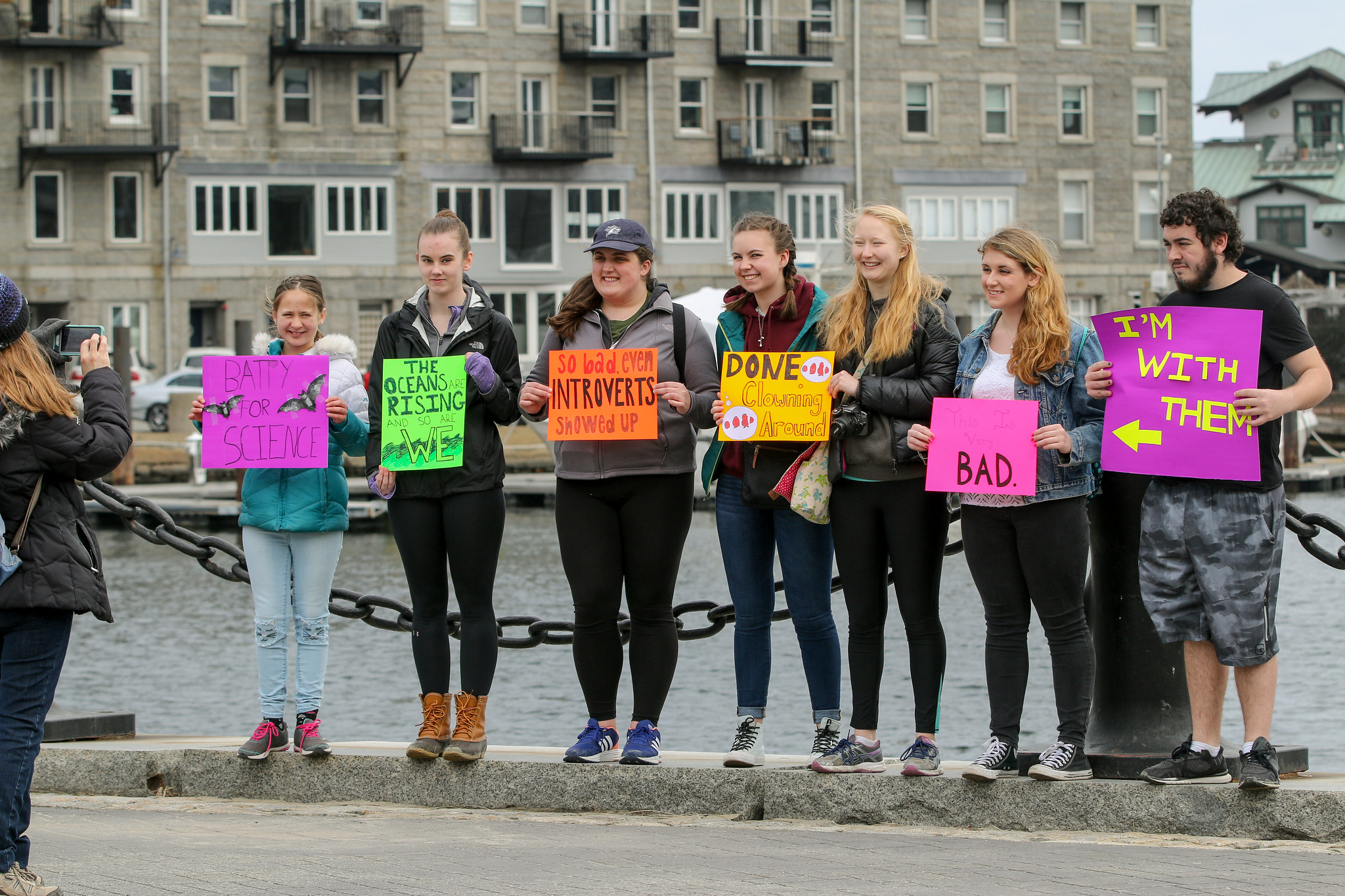 But, after the posed photo is taken the group relaxes a bit. In this photo, 2 of the original subjects change their focus to me and have a surprisingly pleasant smile. The other people in the party go about their rallying experience. This photo, to me, is natural and unforced. 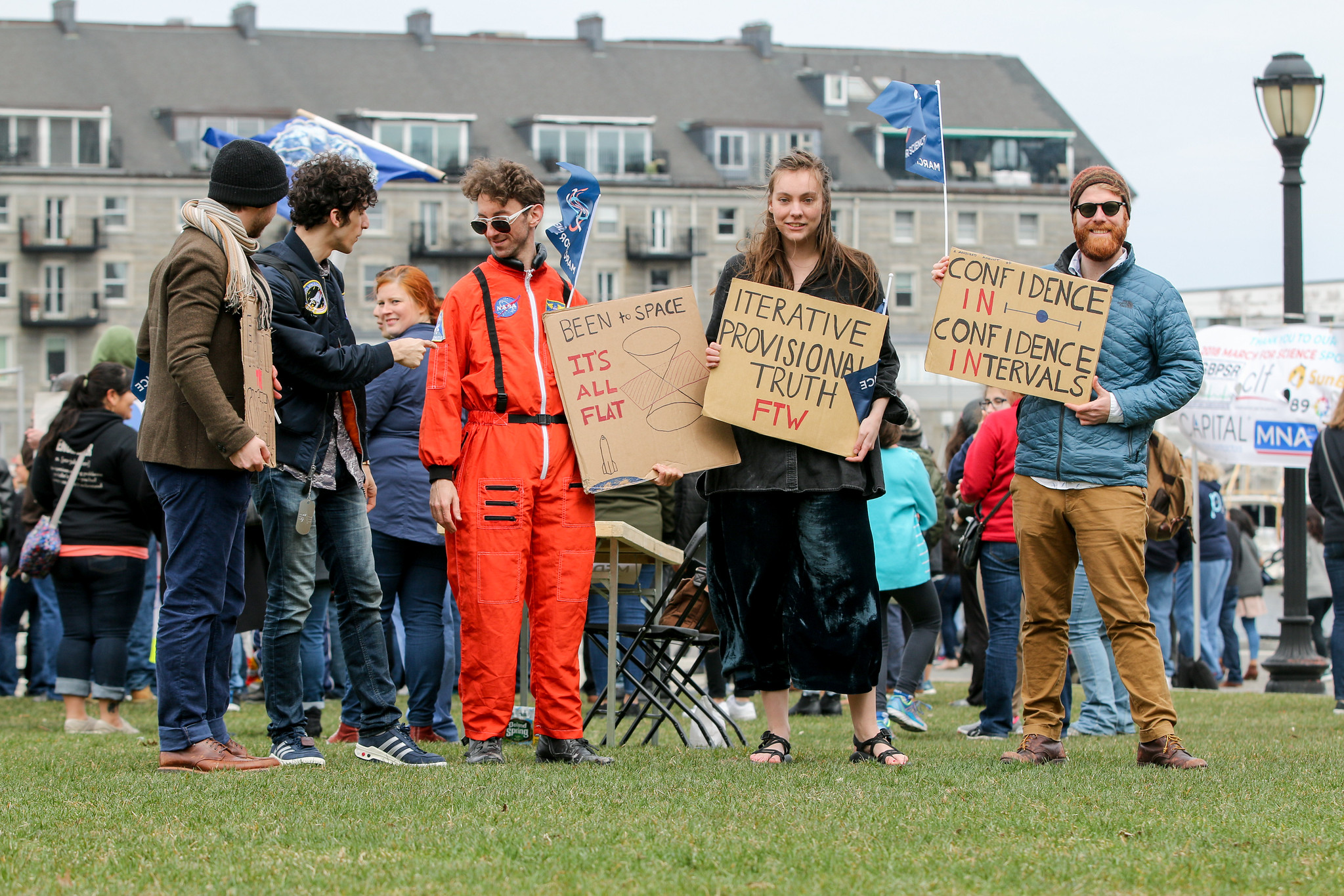 The walkway at the top of the stairs provided a good opportunity to surprise subjects as they entered the rally. The bit of height over the crowd in the background built a better, and less distracted, contrast. They seemed legitimately happy to see a photographer. 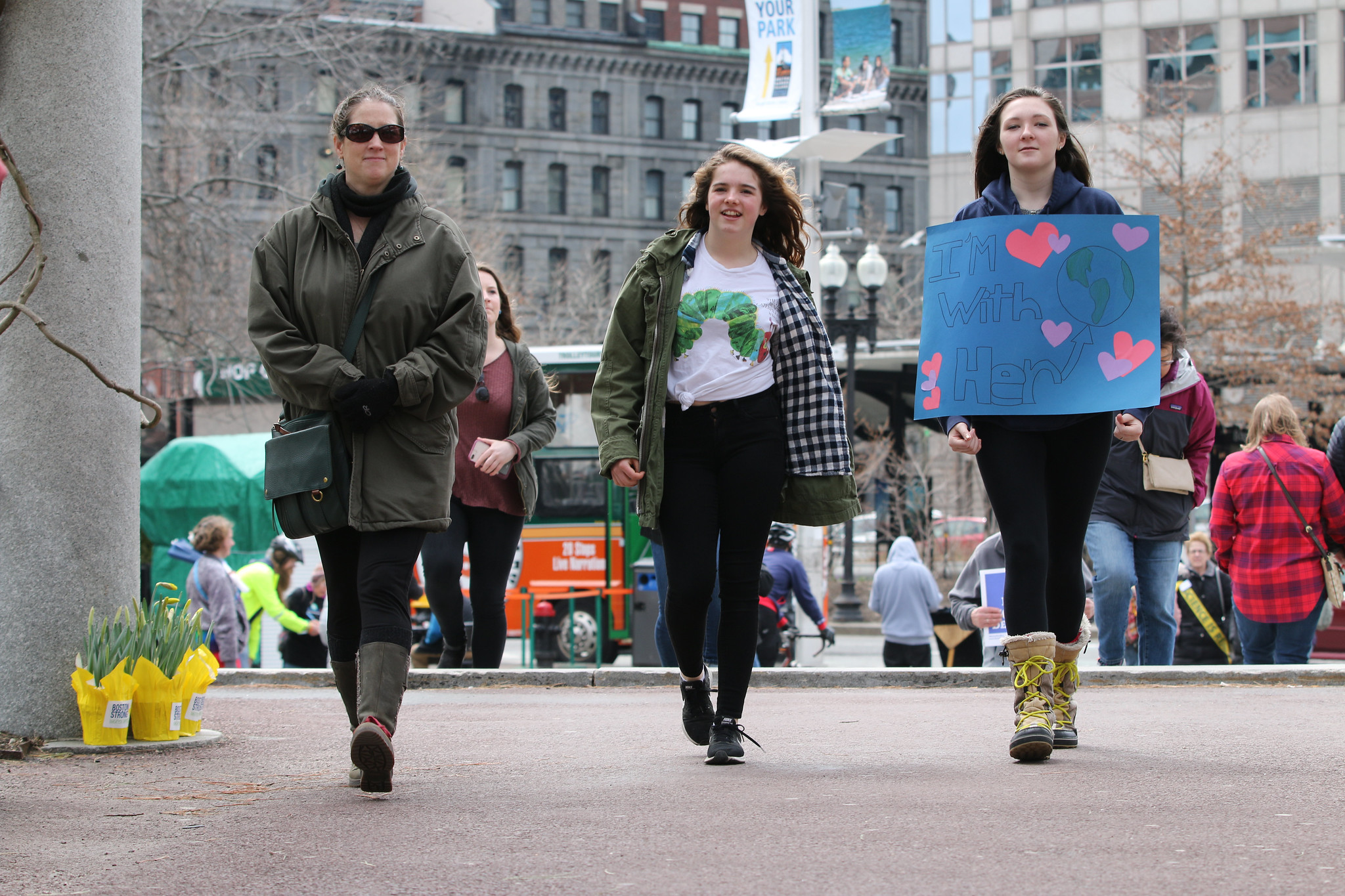 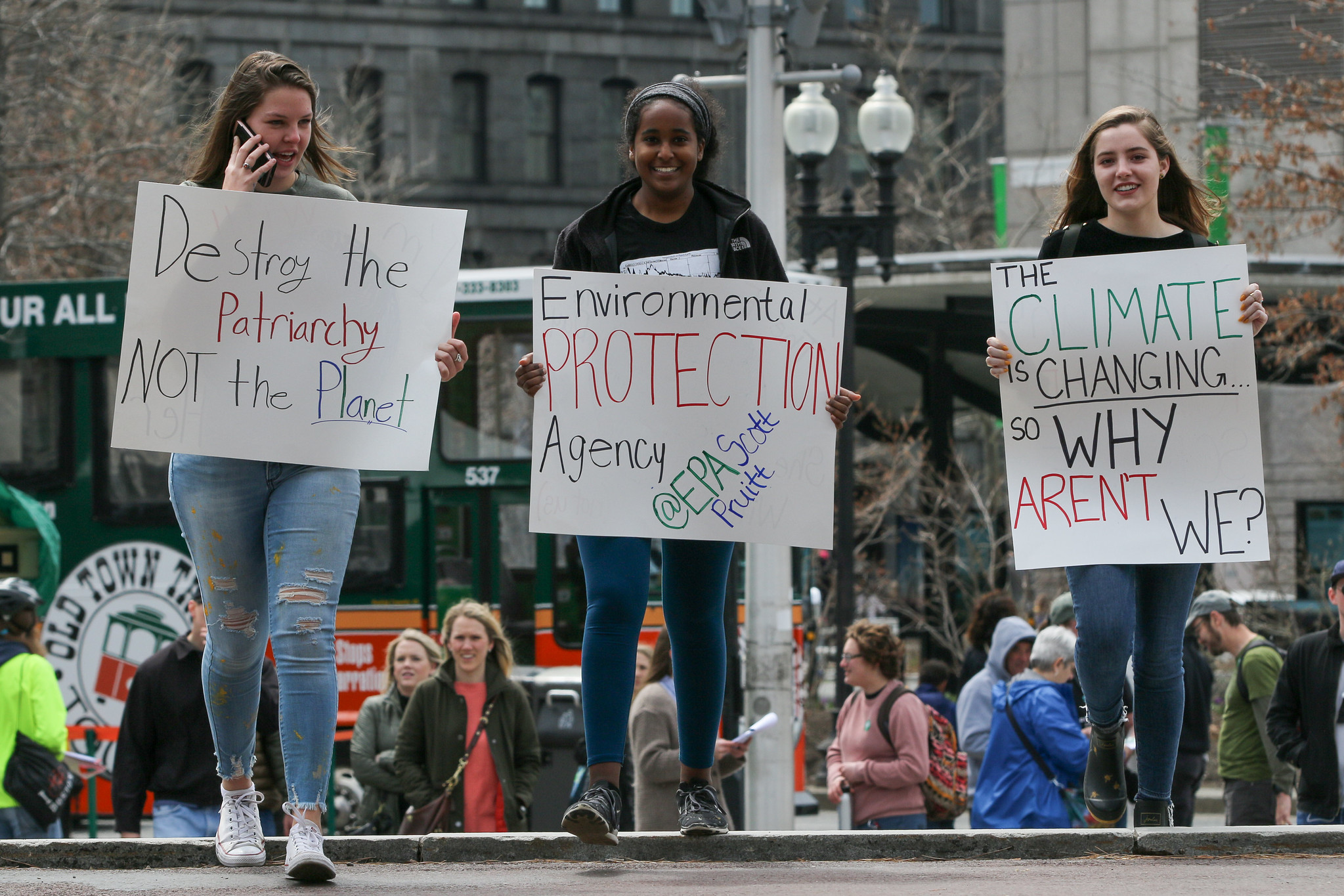 The signs themselves are often the star of rally photography, but the face behind them is important to tell the story. The faces in these photos are not the center of attention, but without them they would be throw-away snapshots. 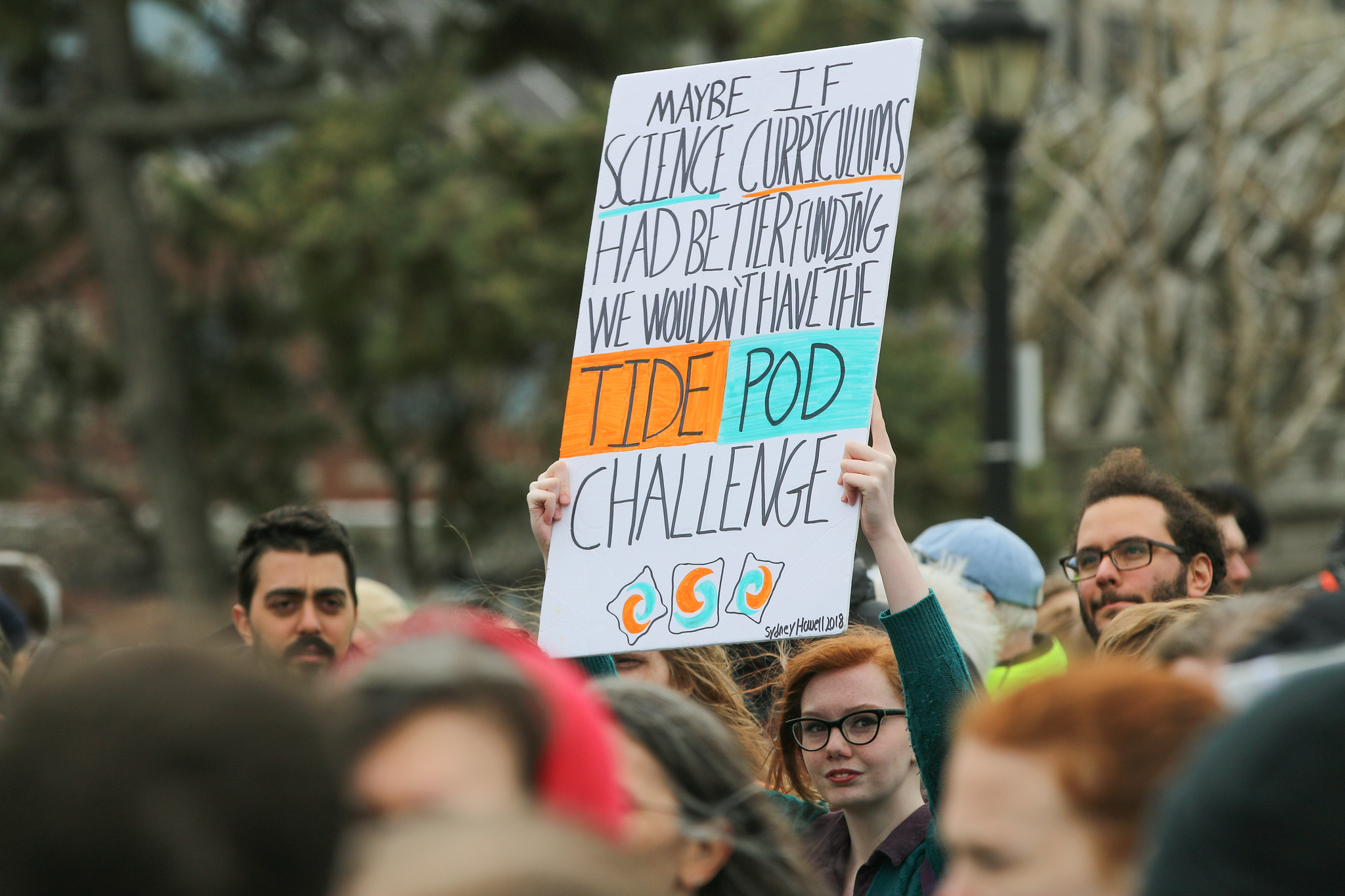 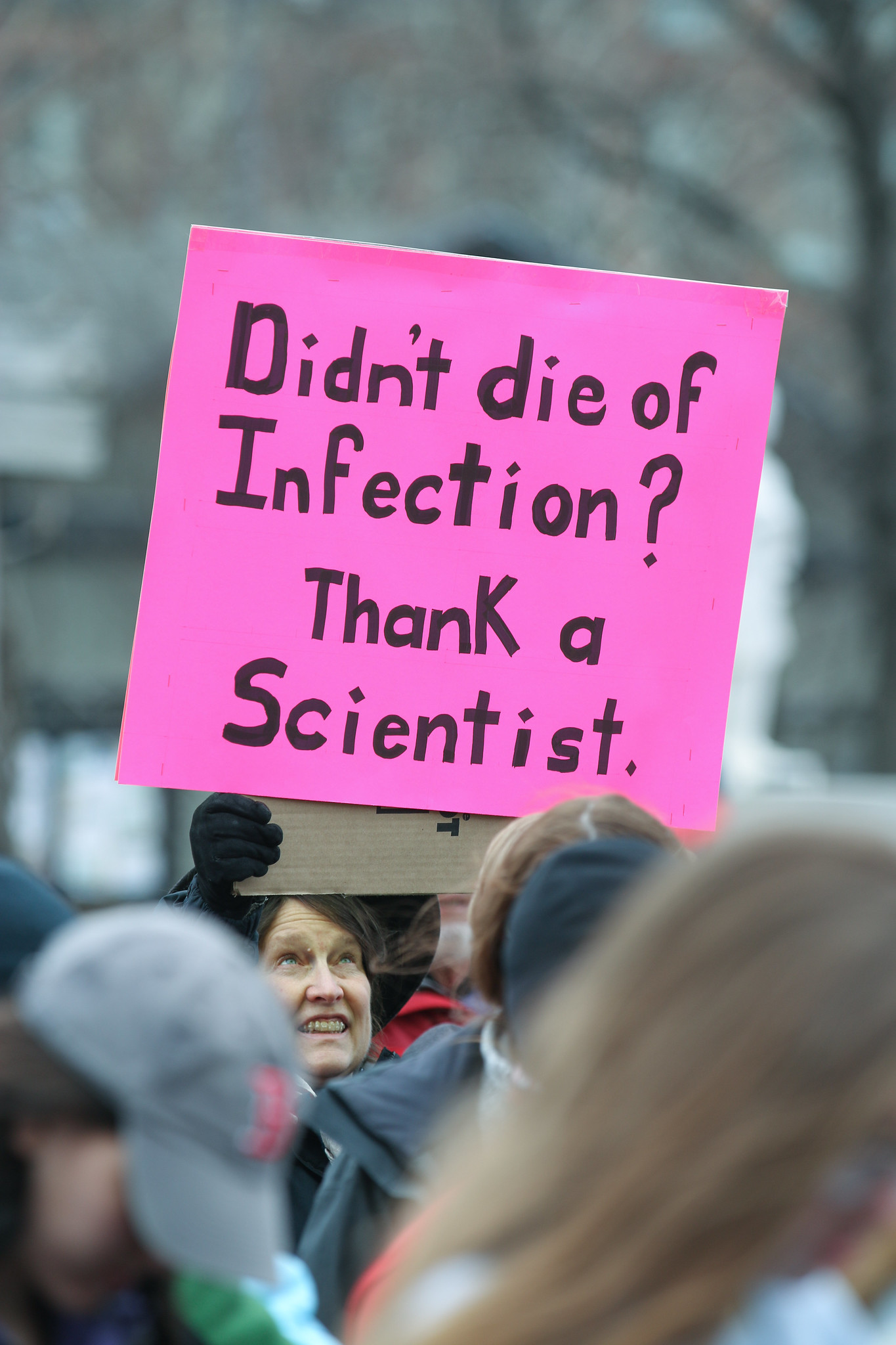 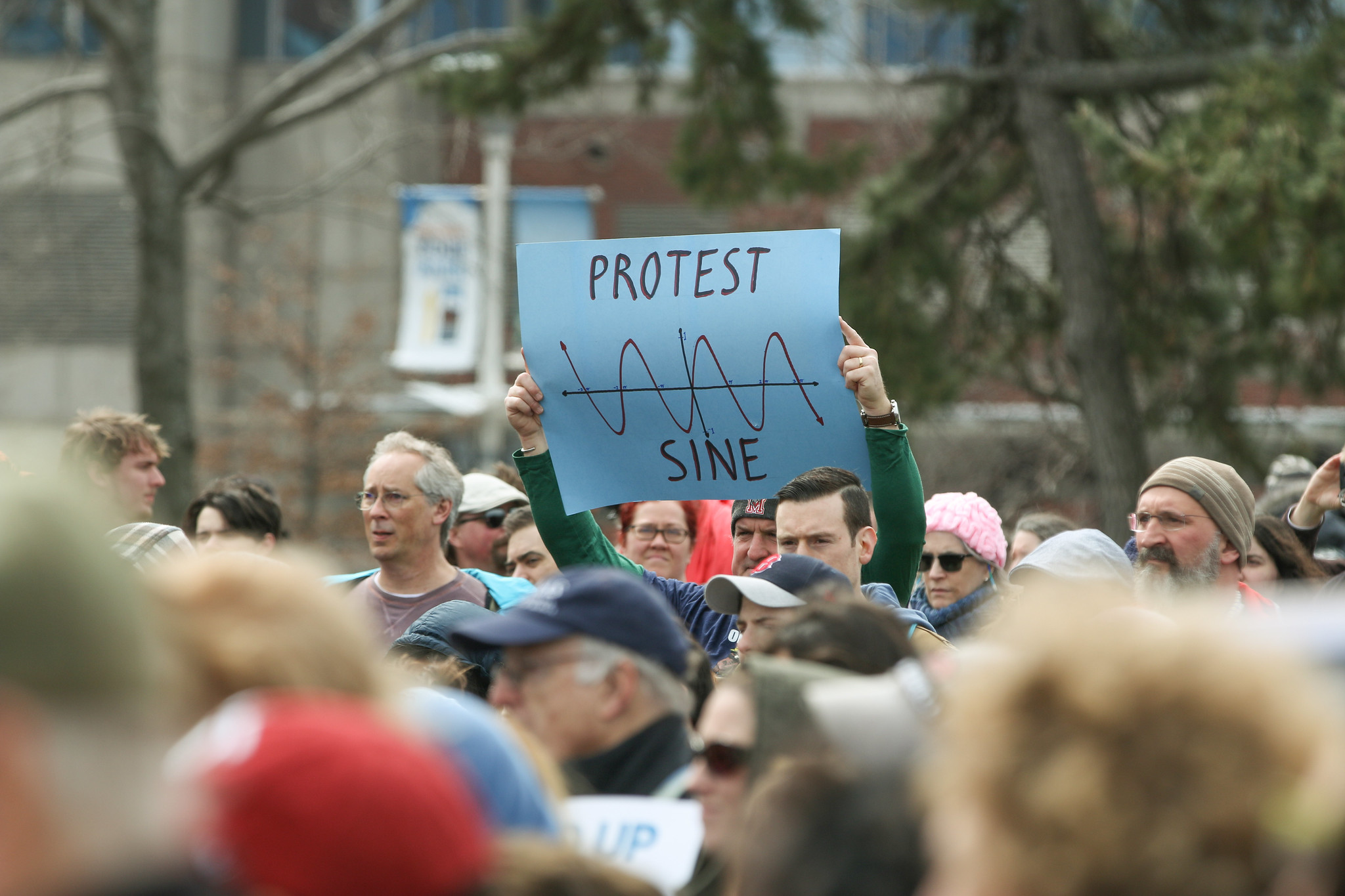 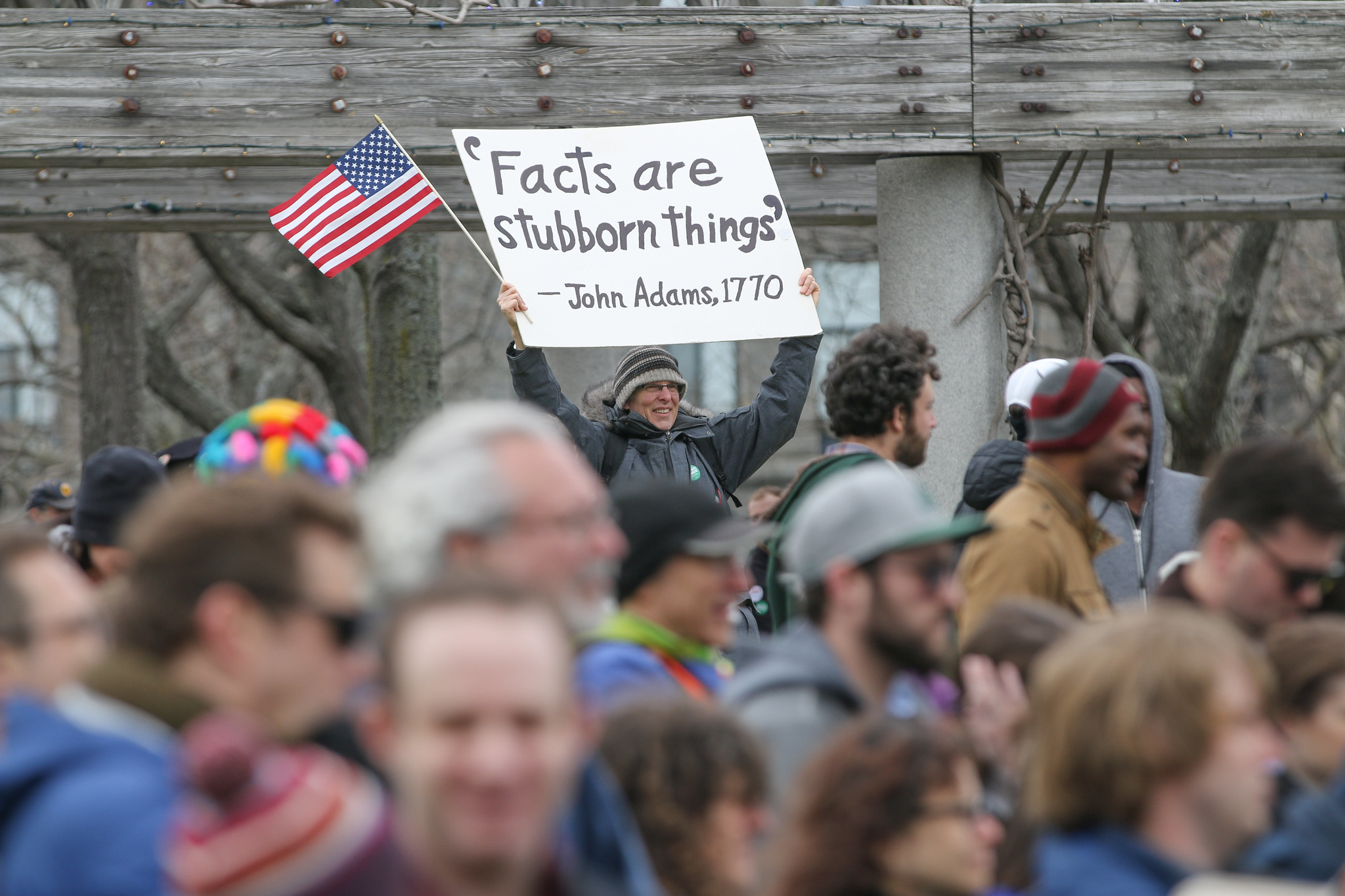 The speakers should have been the nucleus of the rally, but the sound system, and relentless wind, reduced the attention to a smaller crowd. One man spoke of the horrific acts by the still (sort-of) tolerated Christopher Columbus and how we should stop naming parks and schools after him. It wasn’t exactly science-y, but appropriate for the audience, and the park we were standing in. Another spoke of the disparities in school funding between the towns of Weston and Brockton. While the crowd cheered in support of the lesser-funded Brockton, the crowd looked more likely to go home to a town that looked more like Weston. 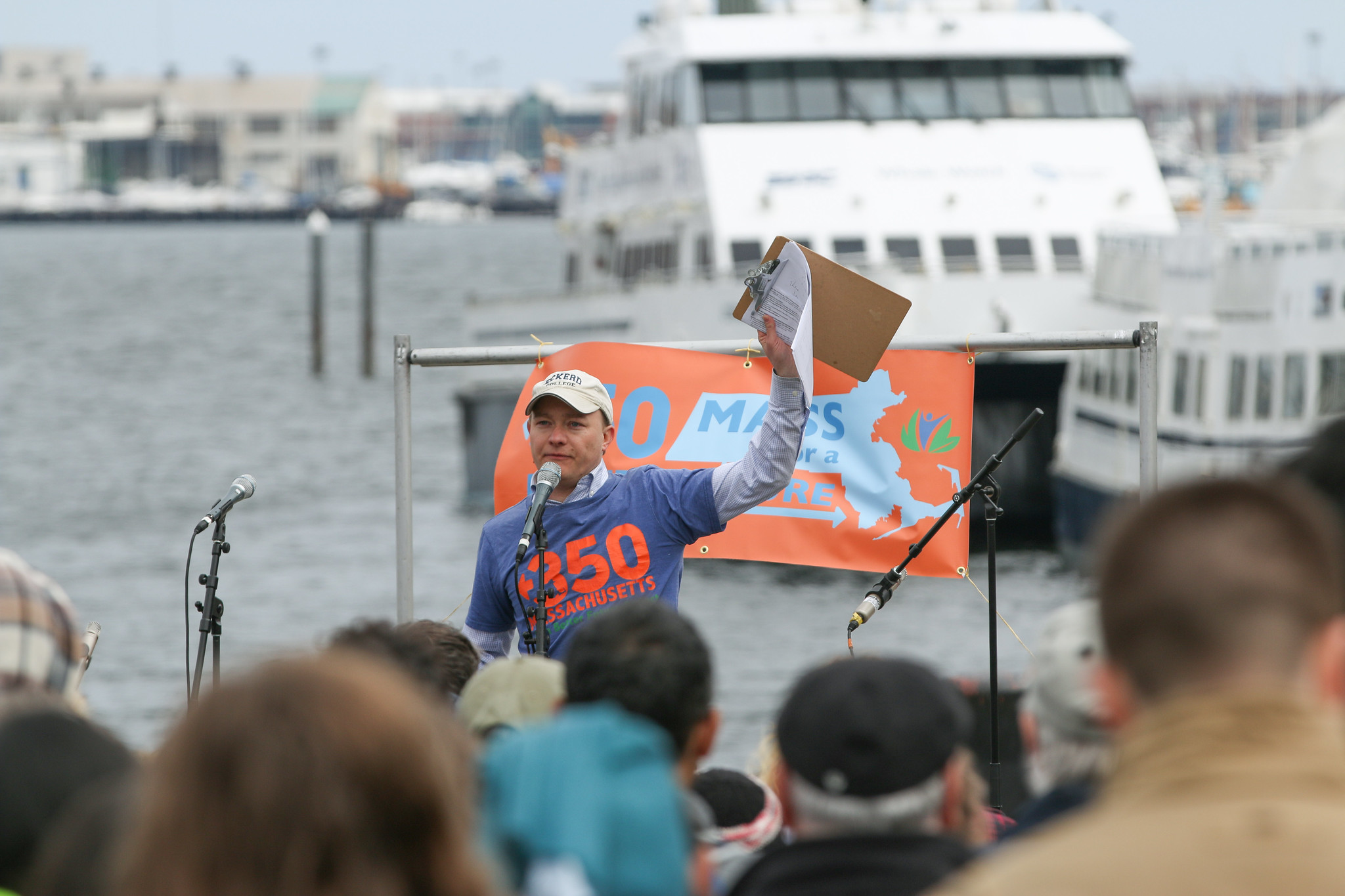 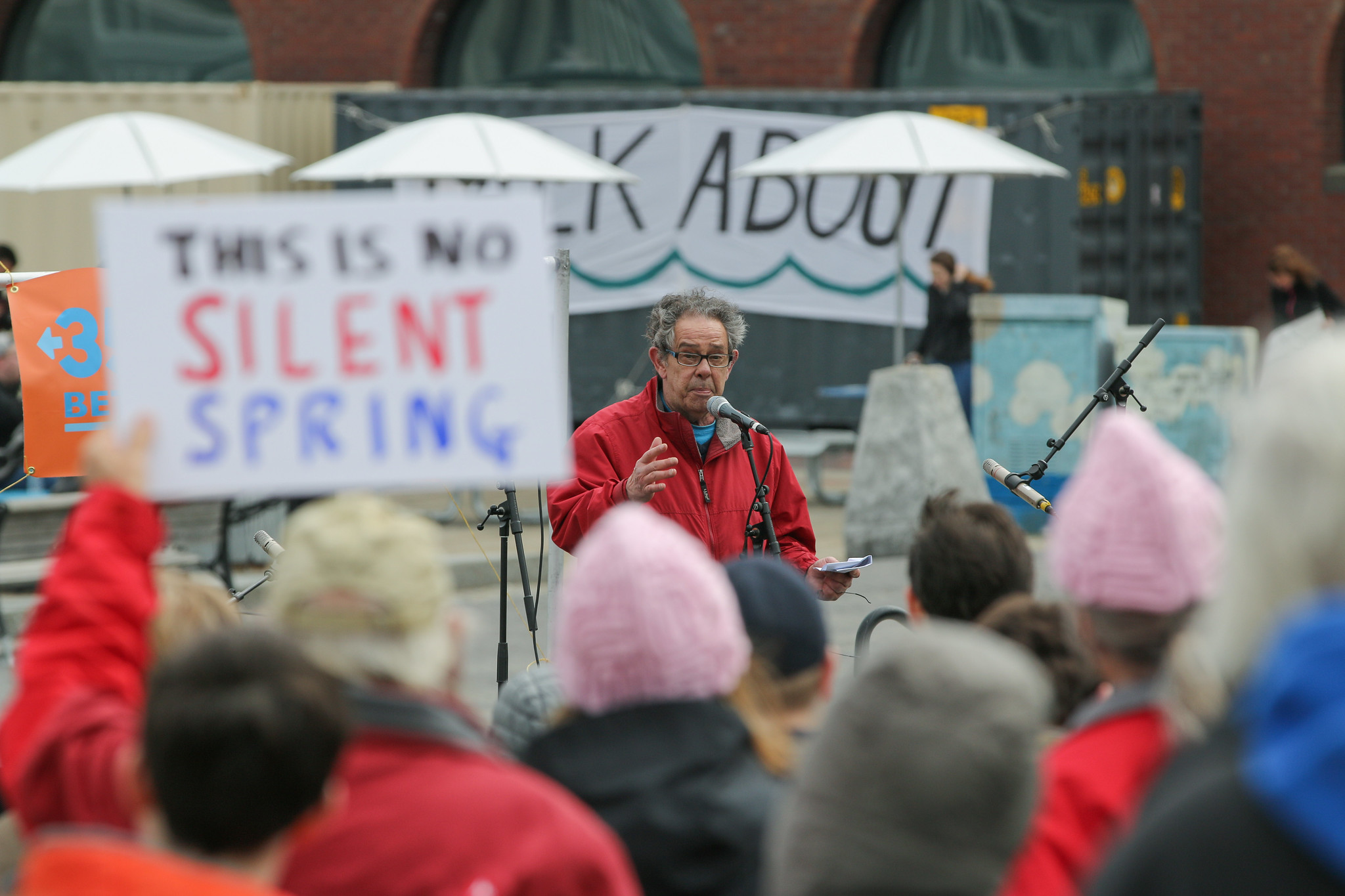 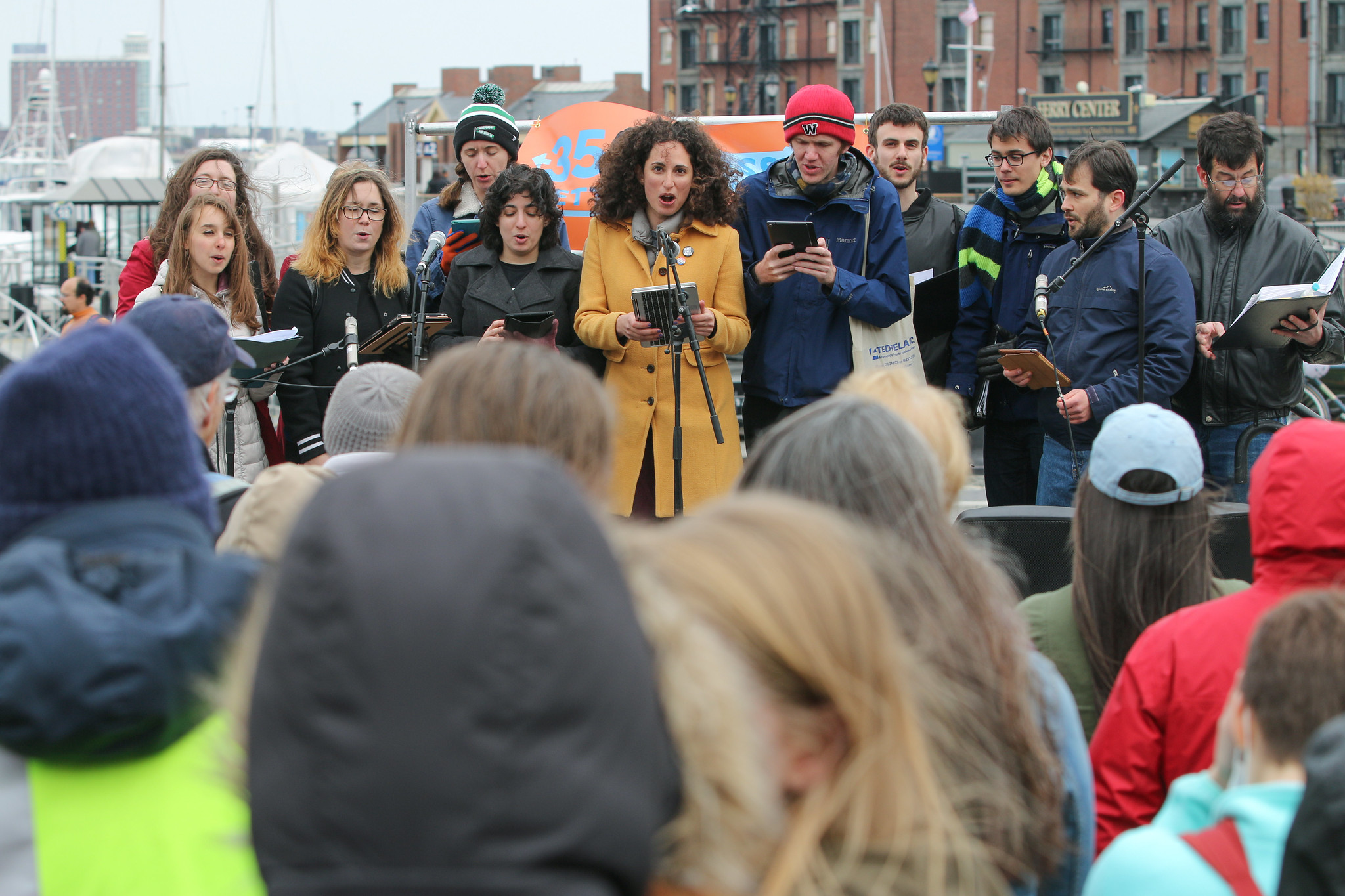 An unexpected highlight was a kid dressed up like a 1980s version of the distant future. He was pushing a globe covered in circuit boards and old PC keyboards. Was it science related? Sort of. It was probably more appropriate for the Museum of Contemporary Art. Photographers and protesters surrounded the boy and their persistent question was “did you make this?” He couldn’t speak with his Tron-meets-Daft-Punk helmut, so he just pointed to his dad, who likely built it. I’m not sure this kid wanted to be there. 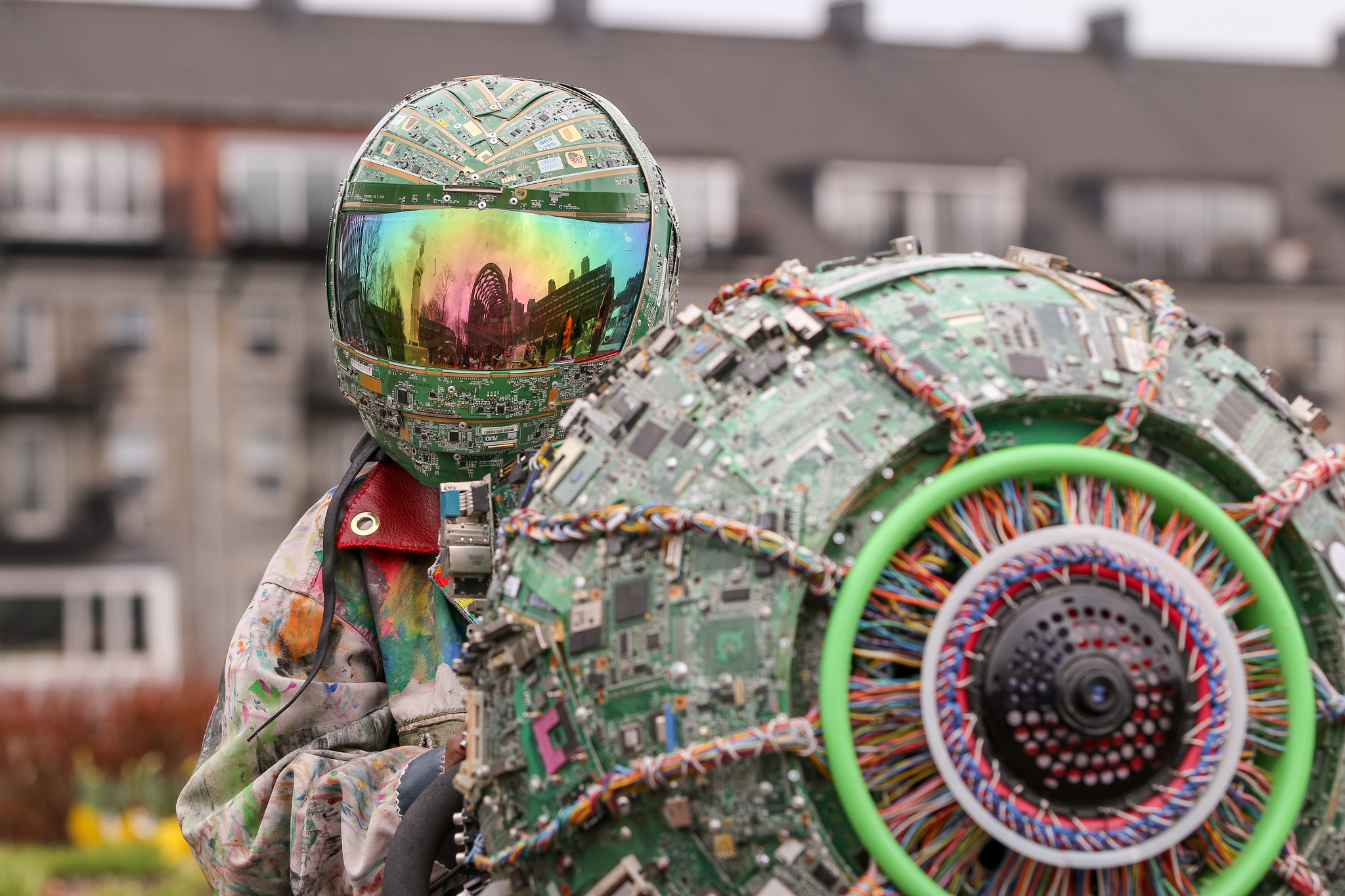 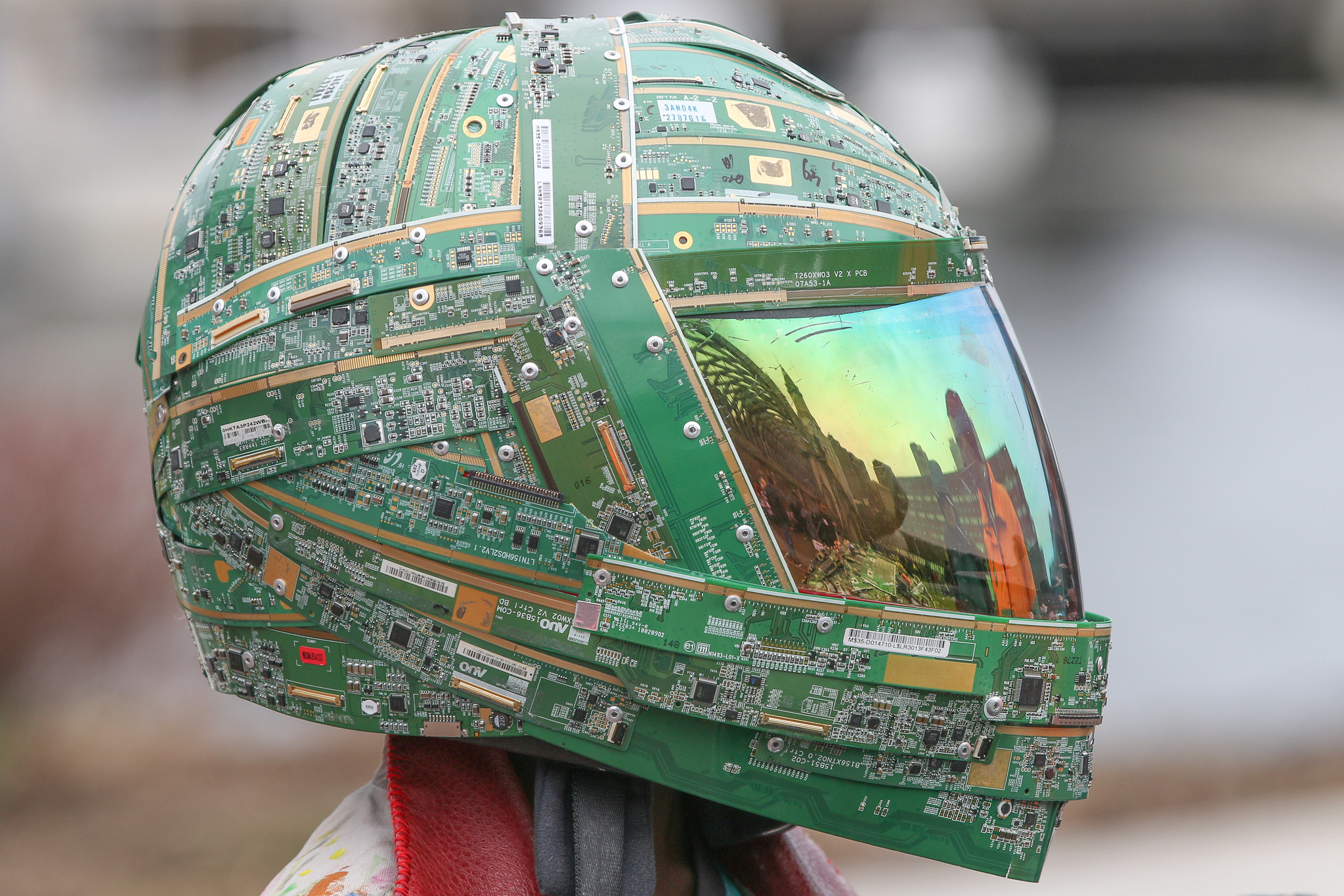 Overall, the rally lacked the roar of the March for our Lives a month prior, but the comparisons aren’t fair. We can’t be saturated with too many rallies if we’re going to knock down walls. Sometimes it’s fine to just preach to the science choir to make us all feel better.