When it comes to grilling there’s a lot of wiggle room when cooking most meats. If you over-cook a hamburger it just goes from an acceptable doneness, to another acceptable doneness. If you under-cook a steak, it doesn’t (necessarily) send your guests to the emergency room or bathroom. Hot dogs can be cooked from 1 minute to 60 minutes. It really doesn’t matter. It’s even cool to cook pork to medium-rare now. And those marinaded veggies you made? No one’s going to eat those anyways.

But chicken is the wild card of the barbecue. If it’s overcooked it tastes like bland jerky. If it’s under-cooked it (probably) tastes delicious until the violent diarrhea. While hours of diarrhea may help you get through the week’s top YouTube videos, it’s otherwise not worth it.

Skinless chicken breasts are the cut of choice for celebrities that “write” recipes for People Magazine. They are lowest in fat content and taste content. Grilling strips them of any juices, and monitoring each differently-sized piece will likewise strip you from enjoying your company. Marinading them in sugary sauces help, but logic says that replacing fat content with heavy amounts of sugar has negated the healthy choices made in cooking skinless chicken in the first place.

The answer is to always grill chicken in its skin. It’s no revelation, I understand, but something that took me a long time to immortalize in writing. The skin can be tossed away after cooking. It’s not really an important part of the meal and not worth the fatty shame felt in eating the fatty, slimy flesh.

It’s my preference to cook similarly sized pieces. Buy a pack of thighs, skinned breasts, or legs. Many supermarkets have packs of various chicken parts, that if put together, makes an actual chicken again, in theory. I like the idea, but it often leads to uneven cooking when not paying attention.

I’ve recently discovered the wonders of cooking an entire chicken on the grill as a cost saving and otherwise interestingly-manly option. I googled a few ideas, and of course, beer-can chicken came up first. But for every article discussing beer-can chicken there was a counter article discussing how it was a very bad way to grill a chicken. There’s something authentically southern sounding about the name Beer-Can Chicken but one shouldn’t take culinary advice from a Kenny Chesney song. I liked the idea of Brick Chicken better.

My first experience involved an 8 pound bird. I resisted the urge to rinse it first as all that would do is splash bacteria around the kitchen. I was about to grill this thing for 45 minutes. If bacteria can live through that they deserve to take over the world, and a little tap water isn’t going to stop their annihilating march.

The most important preparation was to butterfly the bird. I placed it breast side down and used cooking scissors to give it an extreme episiotomy. The bird was long dead, but I couldn’t help but feel slightly embarrassed for it. I’m not convinced that any addition prep is needed. I did rub some spices on it, and even poured a bit of BBQ sauce and beer on it. It greatly improved the smell while cooking, even if the skin with the flavor is later tossed away. For the smell alone, the seasoning was worth it.

The grill should be hot, but the chicken shouldn’t be under direct heat. Of the 3 burners of my gas grill I turned the right one on high, the middle one on low, and the left one off. I placed the chicken as far to the left as possible, breast side down to start. Unlike beer-can chicken, the idea of this “brick” chicken is more than just a buzz-word recipe. The idea is that the weight of the brick evenly spreads out the chicken on the grill to prevent uneven cooking. But bricks are dirty so a large cast iron pan works even better. The real danger is forgetting that even the handle of the pan will get ridiculously hot. Grabbing the handle with bare hand will produce a (probably) delicious medium-rare human palm. 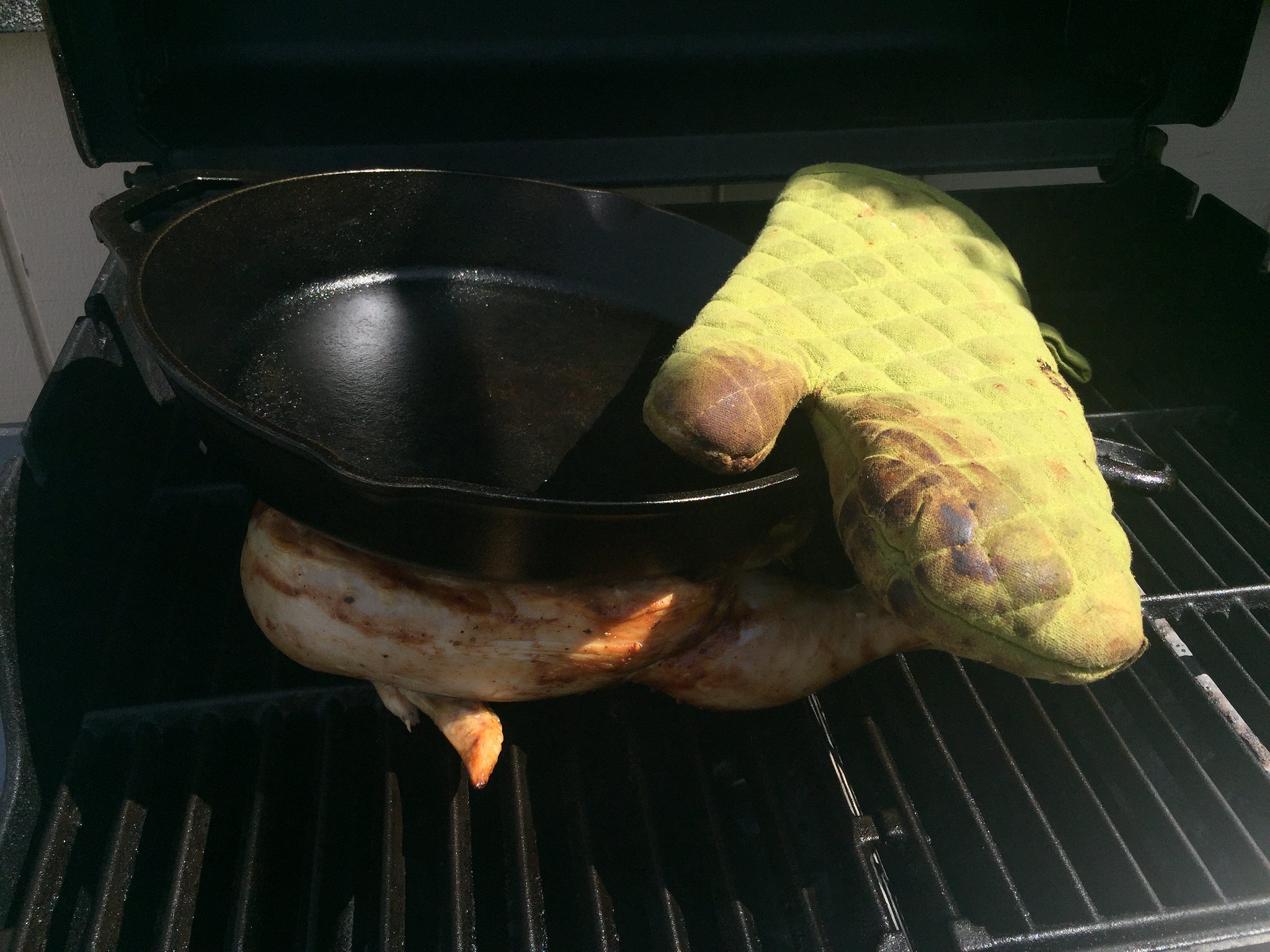 The beauty of this cooking method was that it’s very forgiving in terms of time. I cooked it on the first side for 20 minutes, but on the reverse side I left it in for maybe 40 minutes. I did other things. I did whatever I wanted without the worry that the chicken was about to dry out. And it didn’t.