The Dance Stage / The Catskills Stage 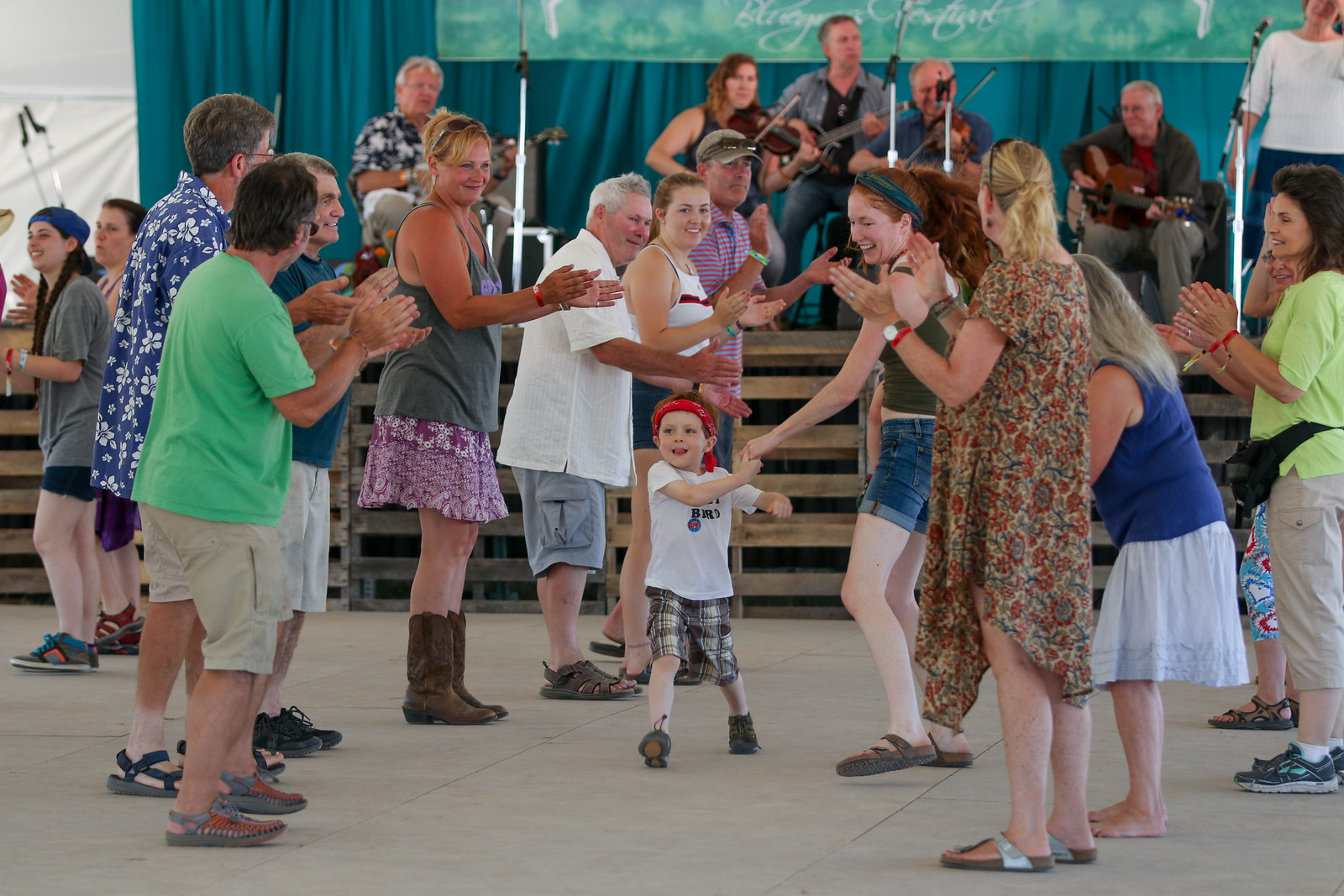 The Catskills Stage is named after the mountain range in which the festival is held, though it may be the stage in the lowest elevation. Conversationally speaking, this stage is the “Dance Tent” and the real irony is that the more popular the stage becomes, the less dancing that occurs. During prime sets like Billy Strings and Della Mae the dance floor is so packed that a spot up front is a half an arm’s length from a fellow dancer. This is no problem at all for the crowd who are all happy to exchange shoulder sweat.

Sierra Hull‘s set at 1PM on the dance stage was the musical highlight of the festival, to me. It was announced the day before that she’d be joined by Billy Strings so I made sure to get a spot right up front before either star took the stage.

This set wasn’t her typical set. Sierra Hull & Billy Strings was a duo set featuring 2 players who had never played in this configuration before, but had encyclopedic knowledge of their instrument and applicable songbook. They flawlessly played fiddle tunes and Bill Monroe standards as called out by the audience. I had heard New Camptown Races, Salt Creek, and Soldier’s Joy a million times at Grey Fox, but I could listen to these 2 play these songs all day.

I was close enough to the performers that I could hear a bit of their off-mic chatter. They were about to start a song and were discussing a key. Billy threw out his preference and Sierra made it known that it wasn’t the key she typically played it in, but it was fine with her. She proceeded to play the song in this foreign key flawlessly.

From a photographer’s perspective this was a fun one, especially since I was in the front row in front of a wooden fence. I could easily rest the zoom lens on the fence for an impromptu monopod.

Sierra Hull is very expressive, which is one of the many reasons she’s instantly likeable. However, the constantly changing and exaggerated expressions can produce a lot of unflattering photographs as her smiles and concentration transition from one to another. A photo of someone talking is never flattering, and the same is true with a face so expressive in their equally expressive playing. The same is true with Chris Thile, another hall of fame mandolin player.

With digital photography this is not a problem at all. I can simply lay on the shutter and take 25 photos at the angle I want and at least a few of them will come out with flattering and interesting faces. There’s no cost taking too many photos, except for a warn down delete key on my keyboard. 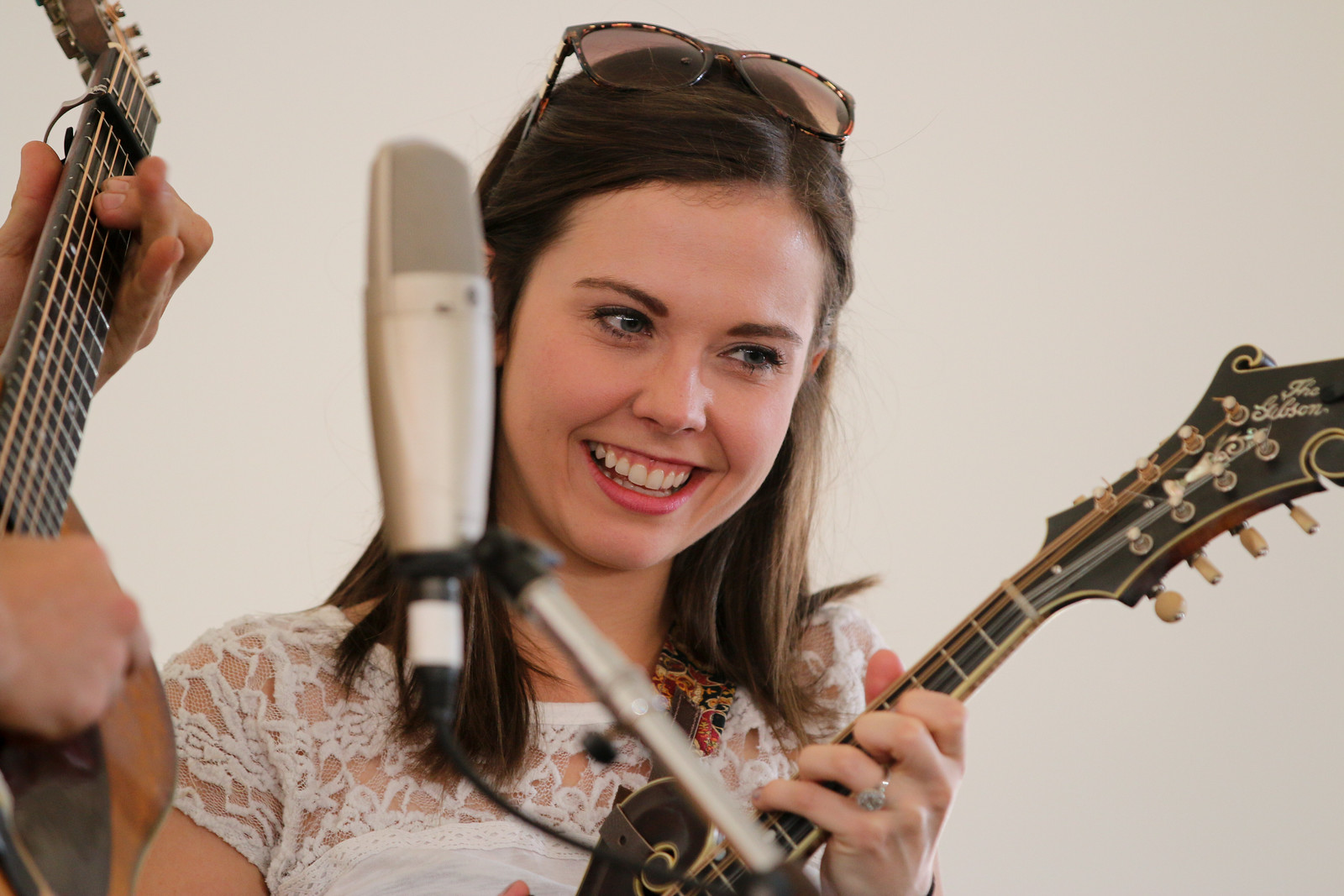 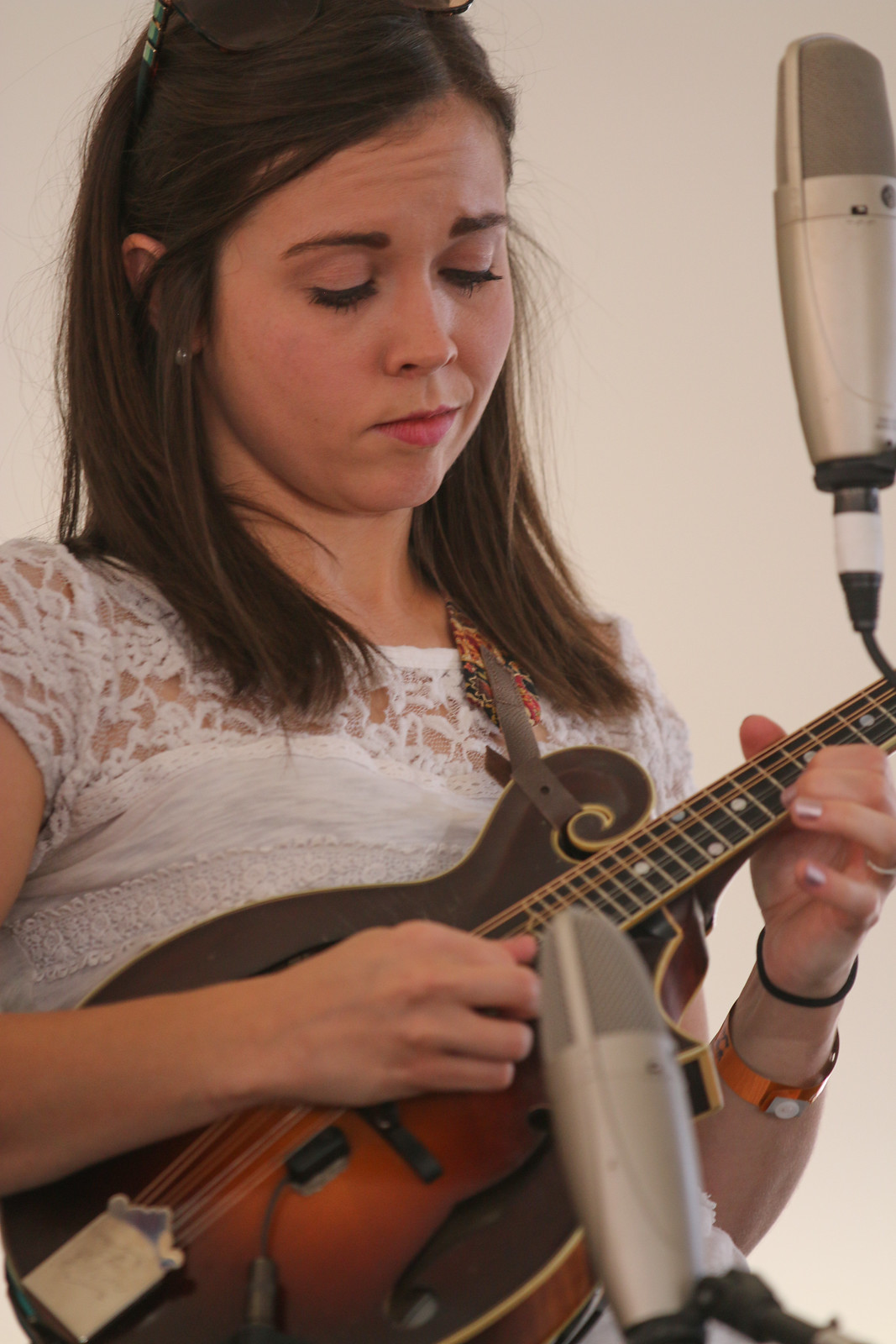 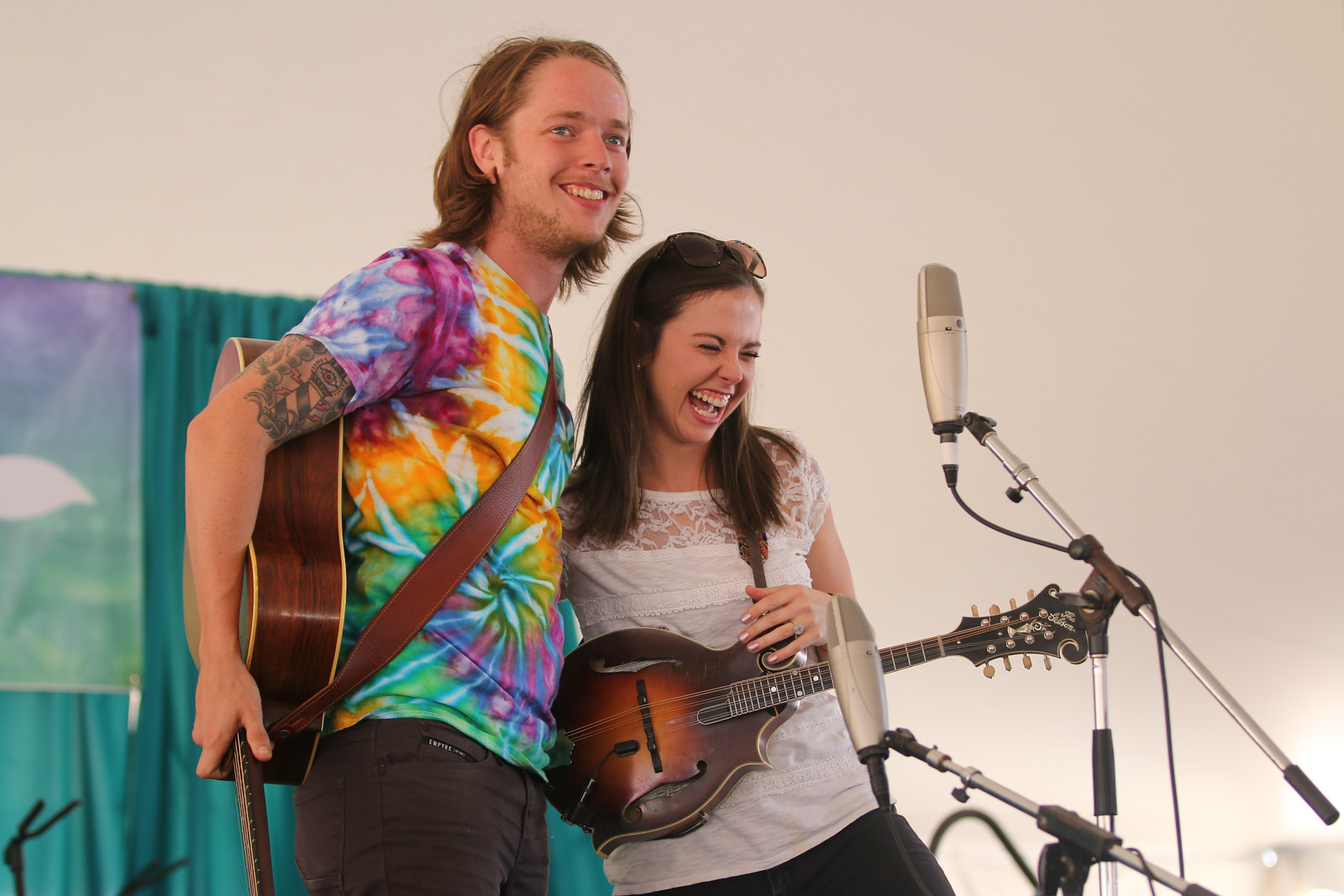 I wandered onto the Dance Stage to check out Cane Mill Road, but I knew nothing about them. It was a name I didn’t recognize but at festivals like these, I always want to catch at least a passing few minutes of all acts I don’t recognize. In the case of Cane Mill Road, I planted myself on the dance floor to the entirety of their set.

This band was young. If I saw a picture of this band, without their bluegrass instruments, I would assume they would play a bunch of Pink Floyd and Weezer songs to win 3rd place at their high school’s battle of the bands. Instead, they quickly proved to be incredibly talented pre-adults who played an amazing cover of Townes Van Zandt’s “White Freightliner Blues”. It’s cliche to say that bluegrass is in good hands with a young talent like Cane Mill Road, but that’s the feeling I got during this song. It’s a song that was written years before I was born, but I felt a sense of pride that they knew of such a great, classic Americana song.

The leader appeared to be Liam Purcell who impressed even more when he picked up the fiddle, but I couldn’t help but think that girls in middle school may find him a bit dreamy. Any way to get pre-teens interested in bluegrass is a good thing. As I left the stage I was excited to tell my wife that I met the JTT of bluegrass, which I now understand requires a bit of explanation. JTT stands for Jonathan Taylor Thomas who was a teenage heartthrob in the mid 90s. That acronym stands for nothing else, but it would later become apparent that not everyone is familiar with it.

I ran into Liam on the merchant path shortly before the dinner break. I shook his hand and told him that I enjoyed his set and I asked his age (16, his response). When I mentioned that I really enjoyed his cover of “Luxury Liner” he quickly corrected me. The song I meant to say was, of course, “White Freightline Blues” and not the excellent Gram Parson’s song that I incorrectly stuttered. Clearly I was star-struck and his powers of woo worked on grown men as well.

But I dug in deeper when I should have walked away. I told him that I was excited to tell my wife that I met the JTT of bluegrass. I could have just told him that I thought he was the JTT of bluegrass, but I added the confusing piece about wanting to tell my wife this fact. Maybe it was some sort of defense mechanism, or I was subtly bragging that I had a wife. His response to this comment was “Who?”. He didn’t know what I meant by “JTT” so I responded with a clarifying “Jonathan Taylor Thomas” to which he responded “Oh”.

He didn’t know who Jonathan Taylor Thomas was. That’s understandable as I didn’t know who Leif Garrett was when I was 16 (and I still don’t really know who he was). He probably had never seen Home Improvement, or The Lion King, but he wanted to move on with his day without upsetting a new fan so he nodded and we parted ways.

I can confirm that despite what the above pictures show, Liam does in fact have a right eye.

The first year I went to Grey Fox started with a flat tire a few miles from my house, and a few hundred miles away from Grey Fox. I had seen Della Mae at the 2010 Ossipee festival and knew they were worth arriving on time for. But the flat tire, combined with their very early start time, made us miss Della Mae in 2012.

Flash forward to 2018 and Della Mae had gone from an emerging artist to a headlining star of Grey Fox. They were playing the main stage this year at around midnight on Saturday night. That’s way too late for me, especially since I was staying at a hotel around 45 minutes away. Della Mae went from going on stage too early, to going on too late. But, luckily for me they played the dance tent at a much earlier and convenient hour.

Rapidgrass took the stage after a jam packed Della Mae, but when I wandered upon their set it was surprisingly empty. I had heard earlier that the band had their arrival from Colorado delayed and had to miss their main stage set a few hours prior to this appearance. I felt bad that their only Grey Fox performance was not as welcoming as it could have been. They were also up against the Sam Bush Band.

It’s tradition that I walk by the dance tent on my way to the parking lot each night. It’s on the way after all, and it’s hard to pass by without stopping for a few songs. Both the Friday and Saturday acts were worth discussing, even if photography wasn’t an option (minus a quick cell phone shot). I couldn’t push my way up front, and even if I did, day light was long gone.

Friday night was Red Knuckles and the Trailblazers, which is Hot Rize dressed like they should be playing a Texas bar in the 70s. They were covering one of my favorite era of classic country; Emmylou Harris, Gram Parsons, Guy Clark, and Dolly.

As I was trying to leave I heard the beginning of Lefty Frizzell’s “Mom and Dad’s Waltz” and knew I had to stay just 3 more minutes. Molly Tuttle was a guest on stage under the temporary stage name of “Shania Twang”. For what it’s worth, I can confirm that Molly Tuttle was in a different outfit for this set.

On Saturday night I caught the end of Billy String’s dance tent set. I could see Liam from Cane Mill Road on stage as well, and while I never heard him play, I thought it was fitting. I was proud of him.

But my favorite moment came at the very end of the scheduled set. Festivals like this are on a tight schedule. Encores are either planned and built into the schedule, or they simply don’t happen. At Grey Fox they don’t happen, and that’s fine with me. However, when Billy left the audience erupted. The announcer came on stage to read from her piece of paper but the audience was not having it. The cheers did not cease. She made it clear that there was nothing she could do. She mouthed “I can’t”, knowing that an encore was desired but she was not authorized to do so.

But Billy Strings was the star of this festival and he could authorize anything he wanted. After a very long 60 seconds he walked back on stage with a smaller group to play one (more) final song.

I’ve been to hundreds of concerts in my life, and this was one of the very rare times that I saw a true encore. It was clearly not planned, and the audience forced the festival to bend to their wishes and not the written schedule’s.

Click Here for The Creekside Stage and The Sierra Nevada Tent