We returned home with nothing to show for our journey, but your pediatrician wanted to see you when we got back. She wasn’t happy that we got sent home the way we did. You weren’t eating, and you were losing weight where you had none to spare. It wasn’t safe for you to be without medical supervision while so fragile. She made some calls to the hospital and they asked us back.

For this round we were in Children’s Hospital for around a week, which was our longest stay for this issue, but not our last. It was, however, the least eventful. Nothing of note happened, but that doesn’t mean it wasn’t incredibly frustrating for a number of reasons. We wouldn’t learn what was wrong with your throat, and why you wouldn’t eat, until the next hospital stay. 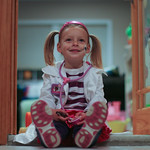 While we waited in our hospital suite for an eventual diagnosis, the doctors wanted to make sure you weren’t losing too much weight. But it was at this point that the doctors became more of a nuisance than anything. No doctor knew what was wrong with you by just looking at your throat, but that didn’t stop everyone from trying. It wasn’t easy to get you to fall asleep, and while obviously it happened eventually, it was always very delicate. Doctors would come in on their schedule at any point during the day or night. It may be that you had just fallen asleep, and your parents were doing the same. We’d hear a knock on the door and a man or woman in a coat would introduce themselves as the resident-on-staff, and they’d have a small posse of other doctors around them to stare and nod. They’d say something like “I hear your kid isn’t feeling well?”. Or “I hear there’s a problem with your kid’s throat”. We wanted to respond “no shit, you read the chart”, but we just nodded as you started to wake up, again. They’d look at your throat, and stop to think for a second, before responding that they didn’t know what it was. We wanted to respond “no shit, you’re like the 12th doctor today to say that”, but we just nodded as you started to scream because a bunch of people just jammed a stick down your throat and shined a bright light at you. The doctor’s left and we started the process all over again to get you to sleep.

The doctor’s were just doing their job. I get that. But at the time it just seemed cold. It was their job to check on the patient for their long-term well-being, and it didn’t phase them that it would cause short-term frustration. Children’s Hospital in Boston used to run an ad featuring a song that went “Until Every Child Is Well“. It was a catchy song. Your mother and I made a quick parody of it that went “Until Every Check Box is Checked”.

Nurses must be used to all sorts of people. Many patients are nervous and stressed, and probably aren’t being their best self. I could have never been outright rude to a nurse, but I’m sure I made some weird comments and jokes. They’d smile or laugh, but in a way that told me they’d rather I wasn’t there. But one time I complained to a nurse about the revolving cast of doctors and referred to them as ‘cocky’. The nurse smiled, in a way that told me she was on my side. It’s an unwritten job description that a nurse makes the patients feel comfortable in an awkward and uncomfortable situation (it may be a written rule, I’ve never read a nurse’s job description). It’s the doctor’s job to make you better, but in a cold and science-y kind of way.

There was a lot of down-time during this stay, and all hospital stays in this saga. How I passed the time, and coped myself, is worthy of its own chapter.