You were the star of this show. Your mother ranked #2 as she stayed by your side 24/7 while pumping and recovering from surgery. I was a distant 3rd. I was just the bystander to the events with the closest blood relation. But that doesn’t mean it all didn’t take its toll on me both emotionally and physically. Since college, I’ve found my peace by going for walks. It’s meditation for anxious and jittery people like me. I was “with” you and your mother for this entire ride, but sometimes I went on walks, both with you and without you.

I didn’t take you with my on my walks outside, for obvious reasons. It was February/March during the snowiest winter we will ever experience, hopefully. I walked around Fenway Park and wondered if the snow would melt in time for Opening Day. I found quiet corners in alleyways from which to take work conference calls. I explored Harvard Medical School campus and wondered what it looked like without a massive snow bank in the middle of the quad. I still don’t know.

Your mother and I never ate at the hospital cafeteria. Sometimes we got bagels from the in-hospital Au Bon Pan, and something called a Croisbun, which was their trademarked combination of a Croissant and a Cross Bun. 2014 was a year where people tried cross-breeding pastries, starting with the Cronut trend. In my opinion, it’s goes against Betty Crocker’s will. If Betty Crocker were a real person, I bet she’d be a conservative, and would want to keep pastries separate but equal. She’d probably also be a bit racist.

Most of my walks did involve getting food for me and your mother. It gave me an excuse, and a purpose, for my walks. I’d often order take-out from the restaurant bar, and order a beer while waiting for the food to be ready. I always thought about telling the bartender about my (and your) situation, but it’s hard to sum it up in the time it takes to make a caesar salad with steak tips to-go at 3:00 in the afternoon. Plus, being so close to so many hospitals, most adults drinking alone at the bar in the middle of the afternoon were probably seeking a short reprieve from a suffering and/or grieving loved-one. The bartender’s likely saga of student debt and rising city rents would have more dramatic long-term affects on a person then my own saga of a hospital guest overstaying his welcome.

I had a habit of taking photos of my beer and texting it to friends. I think I was looking for some pity, and some attention. 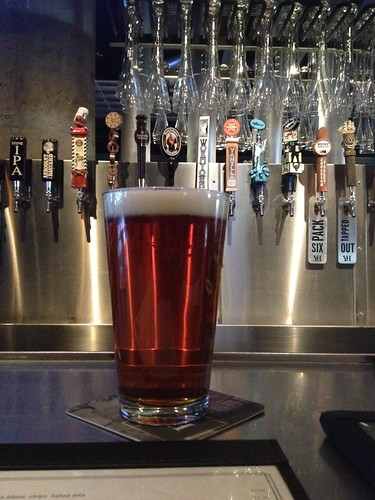 To try and keep you calm I also spent a lot of time walking you around the hospital floor. It gave your mother a few minutes to sleep, usually in the fetal position in the hospital crib. I always sang to you, but it was never a typical lullaby or song composed by an establish sane person. It was due to lack of sleep, but I created deranged Weird Al-style parodies of songs in my head using lyrics from signs around the hospital as I walked around. Sometime’s it was the predictable “Get Well Soon Elizabeth” signs, but more often than not it was warning signs on medical devices, not intended to be read (or parodied) but hospital guests. It’s best explained via examples to try at home.

Try singing the tune “I knew you were trouble (when you walked in)” by Taylor Swift but with these catchy lyrics instead:

“Pregnant. If you are pregnant, or think you may be, tell the x-ray technologist before having an x-ray”

Or sing Air Supply’s “I’m All Out of Love” with these lyrics:

It’s not easy. It doesn’t work. It’s not really fun. But it’s a thing to do when stuck on a hospital floor surrounded by sick kids. And there were lots of sick kids on this floor and as we walked around I couldn’t help but peer into rooms with open curtains.

Some kids were sitting up in their crib at 2AM, full of wires, with Disney Jr. on the TV, and no other adults in the room. This is when I began realizing how lucky we were, even though I didn’t know yet that we were nearing the beginning of the end of our longer-term hospital stays. One of your parents was never away from your side during these stays for more than a few seconds. But not everyone is so lucky. If we both had to work at a not-so-flexible job, we’d have no choice but to leave you alone, even in the middle of the night. It was these thoughts that were crushingly depressing. I didn’t know the stories of any of these other children, but in my head it was always a sad one.